Philip of the Palatinate 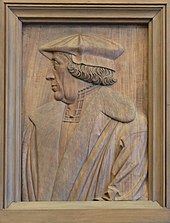 Prince-Bishop Philipp of the Palatinate (portrait around 1525/27)

Philipp von der Pfalz on a painting in the Fürstengang Freising 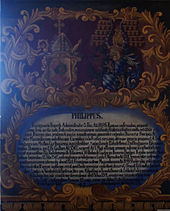 Philipp came from the Wittelsbach family and was the son of Elector Philipp the Sincere and Margaret of Bavaria . He was the second eldest son of 14 children, including Ludwig V.

Philipp, Bishop of Freising since December 3, 1498, successfully defended the Diocese of Freising in the turmoil of the Peasants' War , and also knew how to keep the Bavarian dukes out of the politics of the bishopric. He developed a brisk construction activity. He had the Philipps Castle built on the Domberg . He was buried in Freising Cathedral . Several contemporary portraits of him are known.

When he became coadjutor of Johann III in 1512 . von Schönberg was appointed, he stayed for the longest time in the diocese of Naumburg-Zeitz, ten months after the bishop's death. His main place of residence was his residence in Freising, the administration was mainly taken over by a monastery government. Since he enjoyed the benevolence of the Wettins , he also took a moderate stance towards Martin Luther . After the death of Friedrich III. and the burgeoning resistance of the citizens of Naumburg and Zeitz, Philip, who no longer entered the diocese, positioned himself in the strictly Catholic camp. Tired of office, Philipp tried to find a successor for the Naumburg bishopric.