The Cathedral of St. Maria and St. Korbinian in Freising - often shortened and unofficially also called Mariendom - was the cathedral church and bishopric of the former diocese of Freising , before it was initially abolished in 1803 and re-established as the Archdiocese of Munich and Freising in 1821 and relocated to Munich . The Liebfrauendom there was elevated to the status of a cathedral. At the instigation of the former Archbishop of Munich and Freising and former Pope Benedict XVI. , Joseph Cardinal Ratzinger, he has the rank of co- cathedral . The priestly ordinations of today's archdiocese take place here. The second patron saint of the church, St. Korbinian , is also the patron saint of the city of Freising and the archbishopric.

As early as 715, the first Marienkirche of today's diocese stood on the Domberg , which was founded in 739 by Bonifatius as a bishop's church. Around 860, Bishop Anno built a new three-aisled cathedral, which was renovated after a fire in 903. Today's (third) cathedral, a simple and 78 m long five-aisled building with a double tower facade , is of Romanesque origin and a new building that began in 1159, partly using old components. Completion and consecration in 1205. This replaced the old church, which was destroyed by a devastating fire on April 5, 1159, Palm Sunday. The cathedral has been redesigned several times over the centuries.

The originally Romanesque wooden flat ceiling was replaced in 1481–1483 by a Gothic vault that still exists today. In the course of the first Baroque transformation (from 1619) the Gothic ribs were removed. The renovation, begun for the 1000th anniversary, led to today's richly decorated Rococo shape, in less than a year and a half around 1724 by the brothers Cosmas Damian and Egid Quirin Asam . created. The Asam brothers based their choice of colors for frescoes and stucco on the colors of the high altar painting, so that the impression of the room leaves a harmonious overall picture.

In the 1920s, the frescoes were partially painted over during renovation work. This paint, along with moisture, caused serious damage to the frescoes. The layer was therefore chemically removed during the last complete renovation (2006).

Pope Benedict XVI studied from 1946 to 1951 as Joseph Ratzinger on Cathedral Hill theology , was ordained a priest in the cathedral, and later worked as a professor of theology in Freising. On September 14, 2006, the Pope visited Freising at the end of his trip to Bavaria and met the clergy in the cathedral .

The towers were built from brick and partly from tuff . In contrast to the south tower, the north tower is tapered by two slight steps that result from the removal of the Romanesque structures. Its spindle-shaped staircase is original. Remains of Romanesque arched friezes and pilaster strips have been identified. They were eliminated when the towers were painted in 1724. With regard to the absolute height above sea level (and with only a few meters difference), the cathedral towers with a height of 56 meters and their location on the Domberg are after the new transmission tower at the forest cemetery and the water tower on the Wehrberg, but before the water towers of the brewery Weihenstephan and the 84 meter high tower of the parish church of St. Georg, the third tallest building in the city of Freising.

The narrow external portal (1681) with the niche figure of St. Corbinian is a beautiful Salzburg stonemason and stone carving work made of red Adnet marble , a limestone . The side vaults of the three-part vestibule come from the early Gothic period (1314). On the left side altar the painting by Johann Andreas Wolff “The Beheading of St. Katharina ”, around 1699/1700.

The mighty Romanesque main portal of the previous building (built before 1190) stands under the late Gothic reticulated vault of the central nave from 1483. During the reconstruction, 1159 stone sculptures were placed on the main portal. The figure on the left has traditionally been identified with Friedrich I Barbarossa , Emperor of the Holy Roman Empire, and the Freising bishop and historian Otto von Freising (his uncle); however, this identification could be a baroque innovation. The figure on the right is today identified by a baroque inscription as Friedrich's wife Beatrix of Burgundy , but it may also have been originally designed differently. In any case, there is no contemporary evidence of Emperor Barbarossa's participation in the reconstruction after the fire of 1159. Below the representation of Beatrix a toad can be seen, in which since the 19th century people have wanted to recognize a symbol of fertility , which should provide rich blessings for children; however, the toad is a negative symbol in the Middle Ages. This speaks against an original identification of the portal figure above as Beatrix of Burgundy. It was probably originally a depiction of King Solomon on the left and the Queen of Sheba on the right, which was then referred back to Friedrich Barbarossa and Beatrix after a redesign of the Romanesque portal became necessary due to the installation of the organ gallery, which was done by cleverly adding the inscriptions . 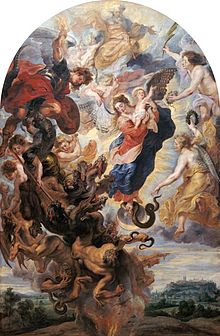 The apocalyptic woman by Peter Paul Rubens; Altarpiece, the original of which is exhibited today in the Alte Pinakothek in Munich.

The current high altar was created by Philipp Dirr in 1625 and replaces the older Gothic high altar. The artist Peter Paul Rubens created the high altar painting between 1623 and 1625, which depicts The Apocalyptic Woman , but was replaced by a copy by Emil Böhm in 1926 . The original painting is in the Munich Pinakothek . On the high altar picture you can see a huge storm of color and movement. In the middle a woman (Maria) who calmly lets the wild fight between the archangel Michael and the devil happen in the black cloud of disaster. Only her dress flutters a little. With the tenderest pressure of her foot she can hold the serpent of evil. The right side is fascinatingly brightly lit. Angels cheer her from the bright side. With maternal pride she carries her child, the Savior of the world, to meet Heavenly Father. At the lower right edge of the picture you can also see the Freising Cathedral Hill.

For the high altar - as is customary in the Baroque era - the Council of Trento (1545–63), based on the medieval sacrament house (or niche), was dispensed with and a tabernacle was added to the high altar itself. However, this represents an art-historical peculiarity insofar as the corresponding directive of the Tridentinum did not apply to episcopal churches.

The cathedral has Gothic choir stalls from 1488 with a row of bishops from 724. Each field has a different rear wall decoration. 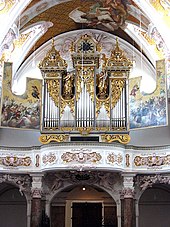 Today the church has five aisles. In the northern area (inner aisle, in the east) is the sacrament chapel with the lamentation group by Erasmus Grasser , created in 1492 (side altar II). In the north outer aisle (eastern end) an altar painting by Peter Candid , 1626, "Maria visits her base Elisabeth". In the south aisle apse is the Johann Nepomuk Chapel (side altar I). Egid Quirin Asam designed it in the years 1737 and 1738 in the style of the Italian late baroque. The three stucco figures on the altar represent the three Saints John (the Baptist, the Evangelist and John Nepomuk). Hence the popular name Johannikapelle . The two outer aisles developed from small side chapels (14th and 15th centuries) that were gradually added to the church. Magnificent wrought iron grills stretch between the outer and inner aisles. The gilded grilles are richly decorated; they are works from Freising around 1630.

The organ was designed according to research results from 2015 by the organ builder Daniel (II) Hayl. The artistic design of the organ and its figurative decoration comes from Philipp Dirr . Only the case of the organ, completed in 1624, has been preserved.

The organ can be locked with two illustrated wing doors, a clock with a Roman dial can be seen in the middle at the top. On the wings there is a concert of angels on the inside and the Annunciation of the Lord on the outside . The current organ was created from 1978 to 1980 by the Winfried Albiez company in Lindau and has 52 registers with three manuals . She has the following disposition:

View into the crypt, on the right the beast column. 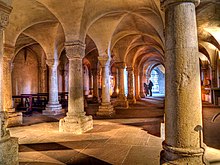 Middle row of columns in the crypt

The new construction of the cathedral began with the construction of a Romanesque, four-aisled crypt , which is of particular importance. This was probably already completed on September 2, 1161, when the relics of St. Nonnosus were buried in it in the presence of Archbishop Eberhard von Salzburg .

The vault of the crypt is arched yoke by yoke and is supported on three by eight columns and two by eight half-columns, whereby the weight is evenly distributed. All columns and capitals of the crypt are individually designed. In the middle of the crypt, as it were as a central column, stands the beast column from the 12th century, the only one of its kind in Germany.

In the crypt there is the Korbinian shrine from the 19th century, in which the relics of St. Korbinian are kept. Saint Lantpert is also buried there.

The octagonal Maximilian Chapel was added to the east of the crypt by Giovanni Antonio Viscardi in 1710 as an extension. Stucco by Nikolaus Liechtenfurtner , ceiling paintings by Hans Georg Asam . Under the niches mural 1772 by Johann Baptist Deyrer . The altarpiece was designed by Johann Andreas Wolff . The chapel also houses a small reliquary donated by Cardinal Friedrich Wetter , with a relic of Blessed Kaspar Stangassinger .

Immediately to the east of the cathedral is the Gothic cloister ; Newly laid out in the 15th century and stucco work by Johann Baptist Zimmermann in 1716 . In its northeastern part, the cloister leads through the Benedictine Church (14th century), in the south, above the cloister, is the baroque hall of the cathedral library (1732).

Bishopric of the Roman Catholic Church in Germany