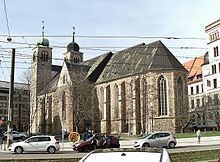 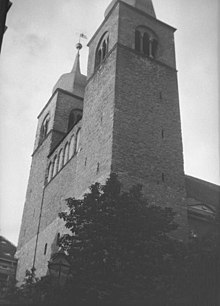 The foundation stone was laid around 1015 by Archbishop Gero , who was buried in the church after his death in 1022. It was founded as a collegiate foundation . In addition to St. Sebastian, the monastery was originally dedicated to John the Evangelist and St. Fabianus . After obtaining the head relic of St. Sebastian, the other cartridges lost their importance. On the occasion of the approach of Henry IV's army , the relic was carried along the border of the Archdiocese of Magdeburg . In later years there was a procession with the relic from the cathedral to the St. Sebastian's Church on January 20th . After several structural extensions, the Romanesque church building burned down in 1188 and 1207.

In the first half of the 14th century the church was rebuilt in the Gothic style. The old choir, probably from Gero's time, was torn down and replaced by a new, larger one. At the beginning of the 15th century, the nave was redesigned with the aim of building a late Gothic hall church. The Romanesque floor plan was retained. On May 17, 1489, the church was consecrated again by Archbishop Ernst after the renovations were completed .

St. Sebastian from the southwest

During the siege of the city of Magdeburg by Moritz von Sachsen in 1550, cannons were placed on the church towers for defense.

In the course of the Reformation , the canons of St. Sebastian renounced the Catholic faith in 1558. Saint Sebastian became Protestant. In 1573 the monastery was converted into a Protestant monastery. On the 1st Sunday of Advent in 1573, the cathedral preacher Siegfried Sack held the first Protestant service. From 1573 to 1609 Georg Rollenhagen held the office of preacher to Saint Sebastian.

Destruction in the Thirty Years War

When Magdeburg was stormed in the Thirty Years War on May 10, 1631, the church burned down. It was still in ruins in 1642 . In 1663 the choir was rebuilt and a wooden ceiling in the form of a vault was added. The first service took place only 61 years after the destruction in 1692. A cloister originally located north of the church fell into disrepair and was then used as a cemetery. The street name cemetery, which existed until after the Second World War, testifies to this .

Detail view of the east side

Repair of the church towers in 1952

There were also burials of respected citizens inside the church.

Use as a magazine

From 1756, there were initially no more services. The church served as a magazine . At the end of the 18th century, the Geros tombstone disappeared from the choir. During the French occupation, the monastery was dissolved in 1810. The building served the French military as a blacksmith's shop and warehouse for beer , brandy and salt . From 1823 the church was owned by the city of Magdeburg and was used as a wool warehouse.

The choir of the church found a religious use again between 1845 and 1854 by the German Catholics . In 1873 Saint Sebastian became the parish church of the Roman Catholic community. It was renovated and new stone vaults were built. From 1878, services were held again in the church.

During the Second World War , during the air raid on Magdeburg on January 16, 1945 , the church was also damaged. The damage to the nave was repaired as early as 1946. Since the other inner-city churches were badly damaged, they were first used jointly by the various denominations . The towers were repaired later.

From 1949 Saint Sebastian served as the episcopal church of the auxiliary bishop of the Archdiocese of Paderborn . Extensive restorations took place in the years from 1953 to 1959 and 1982 to 1991. A bishop's crypt was newly laid out.

In 1994 Magdeburg became an independent Catholic diocese again . Saint Sebastian became the cathedral of the newly established diocese of Magdeburg and the seat of the Magdeburg cathedral chapter . In 2005, further construction work on the cathedral was completed.

The interior was redesigned, a covered cloister was added as well as a sacristy and a chapter cemetery. The altar island was partly redesigned, a new popular altar was erected, in this there is a tooth relic of St. Sebastian, which comes from the skull relic of the Benedictine Abbey in Vienna and was sent for the consecration of the altar. During the construction work, a youth room was built over the existing flower sacristy and confessional chapel . In 2007, Cathedral Chapter Ulrich Lieb inaugurated a room in the west portal, which serves as a silent memory of deceased children. 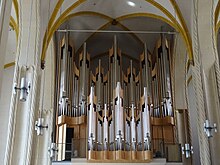 In 1958 the A. Schuster & Sohn company (Zittau) built an organ with 47 registers, 3 manuals, electro-pneumatic action and a free-standing prospectus with little reference to the factory layout. The wind chests - with the exception of the positive one - all on one level took up almost the entire area of ​​the intermediate tower structure. After the main work had become unplayable in the 1980s, it was brought back to full playability in the late 1980s.

This work gave way to an organ built in 2005 by the Eule company as Opus 637 . The instrument was largely arranged in the Central German Classical and Central German Romantic styles, supplemented by a few stops in the French symphonic style. It has 56 stops on three manuals and a pedal .

There is also a choir organ in the church, which was initially installed on the west wall of the north transept and moved to the high choir in 2004. Its construction was started in 1992 by A. Schuster & Sohn, Zittau, dragged on for several years and was completed in 2004 by the Schuster successor company Welde. The organ with mechanical playing and stop action has 20 stops on two manuals and a pedal.

Since the re-establishment of the Magdeburg diocese in 1994, the St. Sebastian Cathedral has been the seat of Bishop Leo Nowak , who retired in 2005, and since 2005 of Bishop Gerhard Feige . The board of directors of the municipality and the municipal association Magdeburg-Mitte is Provost Josef Kuschel, cathedral chapter , supported by the subsidiary (cooperators) and a deacon .

On May 2, 2010, the St. Sebastian cathedral parish was established from the Magdeburg Mitte community of municipalities founded on April 1, 2006 . At the same time, the existing parishes Propstei St. Sebastian, Parish St. Norbert , Magdeburg-Buckau, Parish St. Adalbert , Magdeburg Reform and Parish St. Johannes-Baptist , Magdeburg-Südost were dissolved and integrated into the new parish as sub-parishes. On August 1, 2010, the leadership of the parish was transferred to Provost Reinhold Pfafferodt, who is also the cathedral priest. In addition to Pfafferodt, a cooperator (Chr. Kobert), a deacon (W. Gerlich) and a community officer (Sr. Teresa) are active in the pastoral care of the parish (as of May 23, 2019). The St. Marienstift Chapel also belongs to this parish today.

Bishopric of the Roman Catholic Church in Germany