The title of this article is ambiguous. For the church that used to exist in Magdeburg's old town see Sankt-Nikolai-Kirche (Magdeburg) 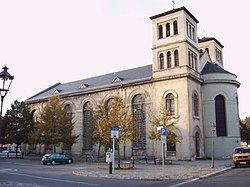 The Sankt-Nicolai-Kirche is a Protestant church in Magdeburg 's Neue Neustadt district . It is dedicated to Saint Nicholas .

The Sankt-Nicolai-Kirche goes back to the tradition of a total of 5 church buildings that have existed in Neustadt near Magdeburg over the centuries and were consecrated to Saint Nicolaus, the patron saint of Elbe boatmen.

The first Nicolaikirche was built from around 1150 onwards. In connection with disputes between Otto IV. And the Archbishop of Magdeburg, Otto IV. Had the Neustadt and the surrounding areas devastated. The church also fell victim to this.

A second Nicolaikirche was built, but it was demolished in 1481 because of dilapidation .

The third construction began immediately, but the inauguration did not take place until 1528. The building was demolished again on April 1, 1554, this time on an order during the siege of the city of Magdeburg.

The fourth church was opened on May 20, 1585 by the evangelical preacher at Magdeburg Cathedral, Dr. Siegfried Sack inaugurated. The dedication sermon has been handed down. It contains a dedication as a quote, which takes up the missing short dedication inscription of the Torgau Castle Chapel from 1544. This church was also badly damaged again during the destruction in the Thirty Years' War .

The fifth Nicolaikirche was granted a longer existence. The inauguration took place on Palm Sunday of the year 1654. Only when the Magdeburg suburbs Neustadt and Sudenburg were largely demolished for an improved field of fire and to expand the Magdeburg fortress during the French occupation in 1813 on the orders of Napoleon , this church was also opened on March 27th Destroyed by demolition in 1813 .

The Neustadt citizens were assigned a new area to settle a little further north. This is where the New New Town was built. In 1817, Karl Friedrich Schinkel was commissioned to design a church for the new location. It was his first church building. Schinkel initially proposed a building based on the Gothic . However, the draft was not implemented for cost reasons. A second draft, created by Johann Conrad Costenoble in coordination with Schinkel, was rejected by the Magdeburg city commandant because the tower was too high. A possible enemy view into the fortress was feared. The foundation stone was laid for the third design in 1821. The building was made by the Prussian state under Friedrich Wilhelm III. financially supported. The inauguration took place on October 10, 1824. The Nicolaikirche is said to have served as a model for the normal church later designed by Schinkel .

Towers on the east side

In the last decade of the 19th century the church was restored again. A new altar and stained glass windows were also purchased.

In 1934 a renovation took place, in the course of which fixtures were removed from the west gallery and the font from 1712 was moved from its central location in front of the altar in front of the left choir arch. In 1935/36, the preacher's houses of the St. Nikolai congregation were built to the west of the church as a replacement for buildings from the beginning of the 19th century.

During the Second World War , the Nicolaikirche was hit by an explosive bomb during an air raid on September 29, 1944 . The bomb hit the south tower. The upper storey of this tower, but also parts of the roof and the barrel ceiling of the nave were destroyed. Further damage was caused when bunkers near the church were blown up after the end of the war .

Reconstruction began in 1946 and was essentially complete by 1954. The middle window of the apse was bricked up in this context. The painter Günter Johl created the mural “Breakers of all bonds” for this area .

In 1975 the Nicolaigemeinde received a used, two-manual organ with 27 registers and an electro-pneumatic action from A. Schuster & Sohn , built in 1957. This was originally made for the Heilig-Geist-Kirche . The organ could no longer be installed there because the socialist planners had this church, which did not fit into the cityscape, blown up in 1959. Since there was no organ in the cathedral since the bombing of 1945, the Schuster organ, although it was completely undersized for the cathedral, was installed there as an emergency solution, and after a Schuke organ with 37 registers could be put into operation there in 1975 with the omission of the prospectus and a thinning of the sonority (expansion of the Offenbass register 16`, as well as the lowest octave of the main work principals 8` and 4`) after St. Nicolai.

In 1993 the eaves collapsed on the south side of the church . Extensive renovation work was initiated, including a renewal of the rotten roof structure affected by core rot , a new covering of the roof with slate and a renewal of the barrel ceiling.

The Schuster organ, built with post-war material, is now worn out, usable registers are to be taken over in a new building, which is scheduled for completion in 2024.

The church was built as a hall church in the classical style with high round windows. The church building is plastered and has a gable roof . On the east side there are two square four-storey towers that flank the choir and have hip roofs . 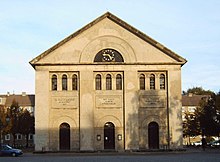 The entrance is on the west side, which is spanned by a large triangular gable . The west facade is divided into three equally sized areas by pilaster strips . Each of these areas bears a large inscription: "DESTROYED IN WAR DRAG 1813" "WITH GOD BY KÖNIGSHULD" "ESTABLISHED IN PEACE 1824".

Inside there are two-tier galleries on the side. The ceiling was designed as a coffered barrel vault. The rectangular choir is followed by a semicircular apse, which originally had three windows with a height of 7.5 meters. The middle window was closed during the reconstruction and now bears the picture "Breakers of all ties" by Günther Johl-Stendal. The picture was made in sgraffito and mosaic technique. On the outward-facing side of the former window, the inscription: "DESTROYED 1944 RIEDERGESTELLT 1948 - 1954" is attached in the same way as on the west gable.

The nave has six high arched windows on each of the long sides.

In the church there is a baptismal font from 1715. This comes from the previous building in the old new town.