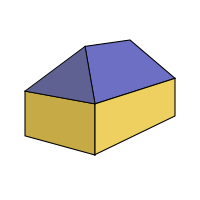 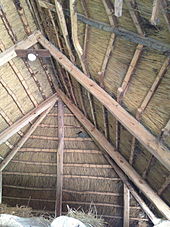 Roof structure of a full hip from the inside (historical, Denmark) 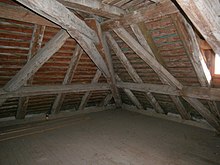 A hip roof is a roof shape , in contrast to the pitched roof , not only on the eaves , but also on the gable end has sloping roofs. The roof surface above the gable end is called the hip.

A complete hip replaces the gable , so the walls are at the same height all around and a rectangular building has four roof surfaces. A hipped roof always has a ridge ; if the four roof surfaces touch in a common point, one speaks of a tent roof or pyramid roof .

The sloping roof surfaces offer less contact surface for wind, the wind load on the construction is reduced. The hip rafters together with rafters , Schiftern and purlins (or wall bar ) triangles in the roof surface, the roof structure stiffened.

If a tower or other building with a square floor plan is provided with a hipped roof, then in the simplest case a pyramid roof is obtained , the four roof surfaces of which each form an isosceles triangle and taper to a point at the top. Pointed pyramid roofs are also known as helmet roofs .

If the floor plan is not square (and does not form any other regular polygon ) and the roof areas still form a common point, you get a tent roof .

If the gable is not completely hipped , it is not completely formed, depending on the perspective. H. crippled or crippled . Such Halbwalm therefore Schopfwalm or partial hip (North German Kröpelwalm) called. The cripples can be of different sizes and inclined, as the picture of the Humberghaus shows. In the old days, the carpenter took the existing or just affordable beam material into account when erecting the roof structure.

Sometimes a hipped roof is equated with a hipped foot roof .

If only the lower part of the roof is hipped (so that a gable is created in the upper part), this is known as the hip .

A hip that neither begins at the ridge nor ends at the edge of the eaves is possible as a special shape. This roof shape is also called Lower Saxony gable.