Combination of the "Welscher hood" and a bulged but not rounded intermediate part ("onion hood") at the baroque St. John's Church in Frankfurt-Bornheim

In architecture, the term hood refers to a bell-shaped, curved roof shape of a tower , which clearly stands out from the usual medieval pointed helmets or the pyramid roofs that were also used later . In the early days, the comparatively low hoods were usually cheaper than the tall pointed helmets and less susceptible to wind pressure .

The term “ hood ” essentially implies rounded shapes, possibly also with almost horizontal intermediate levels and lateral curves. The term " Welsch " denotes a foreign - mostly Romanesque - origin or descent. It is unclear when these terms were first combined to designate a new and eye-catching architectural element.

The “bell hood” as the simplest form of a roof hood is in structural terms something between the pyramid roof and the dome . Although more detailed studies are lacking, it can be assumed that the first construction of a curved tower dome was possible at the earliest in the late Gothic period with its curvilinear flamboyant shapes. The architecture of the hood in Germany was inspired by the travel report of a pilgrimage to the Holy Land by Bernhard von Breidenbach , published and illustrated in German in 1486 . The possibly oldest bellied "onion hoods" in the Christian-Orthodox cultural area ( Assumption Cathedral in the Moscow Kremlin ) are only a few years older (1475–1479). The bulbous " onion hood " or the so-called "Welsche hood" were - mainly in German-speaking countries - often used as roofing for church and town hall towers in the Renaissance and especially in the Baroque period . In the case of the “Welschen Haube”, the crowning of the tower usually consists of several concave and convex parts lying one on top of the other as well as lantern-like spacers . 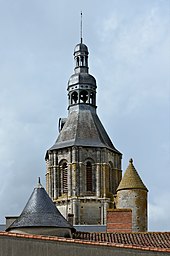 The multi-tiered tower roof of the Saint-Nicolas priory church in Civray ( Nouvelle-Aquitaine ), resting on an octagonal substructure, is not (!) A hood, as there are no curved shapes

A precise delimitation of the different hood shapes has not been undertaken by architectural research so far - mainly because of the regional differences in the use of terms; Also at the time and place of the origin of the frequently used term "Welsche Haube" or the less frequently used term "Thuringian Haube", more detailed studies have so far been lacking, so that the terminology has largely been left to regional traditions or the respective author. The transitions to some spire or dome shapes are fluid in some cases; The main distinguishing features are the characteristic curved shapes of the hoods and the lack of pronounced tips. The following constructive or conceptual delimitations are possible and useful:

"With the interposition of a lantern, the construction of a Welschen dome can be repeated several times on top of each other, so that a high spire is created" (e.g. Petrikirche , Riga ).

The main area of ​​distribution in Germany and Austria is in the Alpine region . Isolated examples can also be found in Swabia , Hesse , Thuringia and Bohemia . More detailed investigations are necessary.

In the area of Franche-Comté , which until 1477 belonged to the Duchy of Burgundy , then came to the House of Habsburg and was only annexed by France in the 17th century, there are counts of over 600 curved tower domes ( clochers comtois ), but also here there are no studies on their exact age. They are mainly found in late Gothic and Renaissance churches , but they could also have been added later (i.e. in the Baroque ).