An isosceles triangle is a triangle with at least two sides of equal length. Consequently, the two angles that lie opposite the sides of the same length are also the same size. For a complete determination, two determination pieces are required, of which at least one side.

Every isosceles triangle is axially symmetrical . It can be acute , right angled or obtuse angled . If the apex encloses the angle or , it is called the golden triangle of the first or second kind .

The basic set of angles says that in an isosceles triangle the two basic angles, i.e. the angles that lie opposite the sides of the same length, are equal. The reverse also applies: If two angles in a triangle are the same size, the two opposite sides are also the same length.

In the isosceles triangle, two sides of different lengths immediately determine the third one, if you know which of the sides is the base. This results in an SSS case . The angles can be calculated using the law of cosines .

One side and one angle

If an angle is given, the relationship can be used

immediately calculate all remaining angles. This allows the triangle to be treated according to the WSW case . The missing sides can be calculated with the sine law.

In an isosceles triangle that is not equilateral , Euler's straight line therefore coincides with the axis of symmetry. 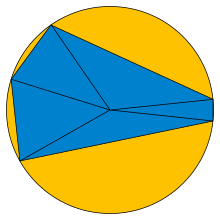 A polygonal tendon is divided into isosceles triangles by the radii of its circumference .

Each chord polygon that contains the center of its circumference can be divided into isosceles triangles by the radii of this circle , which run through its corner points . These triangles are isosceles because all the radii of a circle are the same length. This decomposition can be used to derive a formula for the area of the polygon as a function of its side lengths, even for chordal polygons that do not contain their circumcenter . This formula generalizes Heron's theorem for triangles and Brahmagupta's formula for quadrilateral tendons .

Some particular polyhedra have isosceles triangles as faces , for example regular pyramids and regular double pyramids . The surface of a Catalan body consists of congruent isosceles triangles. The polyhedra mentioned are rotationally symmetrical , ie they can be mapped onto themselves by rotating about certain axes of rotation .