Head of a TP pillar near Possenhofen , Starnberger See (Bavaria). The triangle here marks the south side. 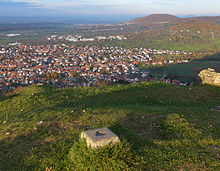 TP (front) on the summit of Limburg

old signal tower of the first order trigonometric point on the Hainleite near Oldisleben, taken in 1990 shortly before its destruction. The year of construction is unknown, but was already in the 50s. It was the last tower of its kind and consisted of 2 nested wooden towers

A trigonometric point (TP) or triangulation point is an observation point of the national survey or a larger triangular network . With its coordinates and its marking (stabilization in the terrain) it forms an essential basis for geodesy and cartography . The surveyors involved in performing triangulation were formerly known as trigonometers .

The TP are marked as small triangles on the topographic maps . In the field, such points are used for geodetic connection measurements , their precise orientation and as fixed points for local measurements.

Top and bottom point on Mont Alban in France

A distinction is made between high points and ground points :

In Germany the pillars usually have a triangle on the north side and the letters "TP" on the south side. In Austria, Hungary etc., on the other hand, “KT” (cadastral triangulation ) is engraved to the north; in the east there are also pyramid-shaped pointed "KF" stones in use.

To ensure security, important TPs are "attached" to additional survey points in the immediate vicinity, i. H. insured controllably by bulky measures . For TPs in the vicinity of buildings , some of the complex marking can be omitted and z. B. be secured by tower bolts on churches or by " twin stones ".

For precise measurements in the TP field, the point on the ground is exposed and then the pillar is again dug centrically above the plate. For all other purposes ("local connection") the cross mark on the stone surface is usually sufficient.

TP are not height control points . In the case of pillars in particular, the height can change as a result of digging in and out. To check the horizontal position, a few securing points are created in the immediate vicinity, the distance to the TP is precisely known. In localities, ground points can also be located on streets or sidewalks in small depressions that are closed by a cover. For TPs with low priority (4th to 5th order, see below), maskable metal tags are also used.

Some points in the first-order network or important control points e.g. B. in the case of dams instead of granite stones are marketed with surveying pillars that are about 120 cm high. They must be founded at least 80 cm deep or erected directly on natural rock ( frost depth ~ 60 cm). The cross-section is at least 35 × 35 cm, in which a stainless steel or brass plate is embedded at the top , on which the measuring instrument ( universal instrument , theodolite , etc.) is placed exactly in the center. Astronomical and Laplace points have i. A. a larger cross-section to be able to set up a passage instrument or an astrolabe . For particularly delicate measurements - e.g. B. on the portal points of a tunnel - a wooden platform is erected for the observer to avoid even the slightest pillar slope.

In the past, the TP were marked with their own signal structures (raised stands or surveying towers or " pyramids ") made of wood or metal to consolidate and check trigonometric networks for national surveying . These signals were often set up permanently because they had to be aimed at from a greater distance (3 to 30 km) for angle measurements . These signals were erected as towers with a height of up to 40 m on particularly important TP. Because of the good visibility, numerous signal and observation towers were later discovered and expanded as lookout points :

Since the coordinates of new points have increasingly been determined with satellite-based methods ( GPS ) in recent years , the signal structures are sometimes unnecessary. Smaller signal structures can still be found here and there, especially as pole signals in mountainous countries . Survey points to hardly accessible mountains in Asia or America are also by " stone men signaled" centrally built cairns, which are up to 40 km wide recognizable in the theodolite.

Monument in memory of the TP Rauenberg in Berlin-Tempelhof

On the basic network of the 1st order triangulation points - which are about 20–50 km apart - more closely meshed surveying networks are built : from the 2nd order network with a point distance of about 10 km - in the previously common way of working - down to the 4th order in km -Spacing. From the 3rd order onwards, the TPs are less expensive to market because they can be restored more easily if they are destroyed or overgrown. In Austria , Hungary and some neighboring countries, these points are marketed as granite stones about 80 cm deep and called KT stones (after the earlier cadastre - triangulation of Austria-Hungary).

In Lower Saxony some trigonometric points go back to the Hanoverian land survey by Carl Friedrich Gauß . The TP Rauenberg is a special point : It is the fundamental point of the German Main Triangle Network (DHDN) - similar to the Hermannskogel mentioned above for Austria's national survey.