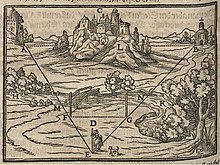 The triangulation (dividing an area into triangles and the measurement of) the classical method of Geodesy for performing a national survey .

In Europe and America, such trigonometric surveying networks were established by almost all states in the 18th and 19th centuries; some western small states and most developing countries continued to do this in the 20th century.

The basic survey of a country in the form of triangular networks also served the so-called earth measurement (exploration of the large-scale earth figure ) as well as the basis for the survey of the country (creation of precise maps ) and for all further surveying work.

The method was probably already tried around 800 by Arab astronomers for the determination of the earth's figure ( degree measurement ), but it was only worked out mathematically precisely by Snellius . Their practical application was gradually replaced by the new satellite geodesy methods from the 1970s .

This article essentially relates to the application of triangulation in geodesy or cartography and its history.

Measurement of a point in the triangle

In the field, angles can be measured much more easily (without contact) and more precisely than distances, especially if they are very long. The triangulation method is therefore used for large-scale measurements : If the angles between the sides of a triangle and the length of one of the sides of the triangle are known, the lengths of the other sides can be calculated using trigonometric formulas .

Simple trigonometry is sufficient for short distances or in the plane. If one looks at a target point C from the two ends A and B of the base c, the two angles α and β to the base can be measured. The third angle γ = 180 ° −α − β. The distances AC = b and BC = a then result from the equation

If the triangle is also oriented astronomically (in the south or north direction ), the positional relationships of the triangle points can also be calculated in a coordinate system .

As triangle points z. B. understood the two ends of the known route and the point to be measured in the landscape. The process is divided into distance measurement and angle measurement .

If no measured distance is available yet, e.g. B. at the beginning of the national survey , it must be determined. Either directly or, if it is too long, indirectly. For the above-mentioned example of national surveying, a baseline of only a few kilometers between two fixed points was determined and precisely measured by placing rulers next to one another or with measuring tapes or wires. The determined length was in turn by triangulation on the z. B. 50 km long distance of the actual measuring triangle transferred.

The vertical and horizontal angles are measured with the theodolite . 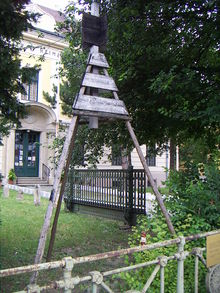 Description label for the small pyramid

Triangulation column on the Hohe Brand

By connecting the triangles with common corner points to form a triangle network, the already determined sides of a triangle can serve as a basis for calculating the neighboring triangles. The basic measurement of the Großenhain baseline was sufficient for the entire Royal Saxon triangulation .

Geodetic fixed points were set up as triangular points on elevated points in the landscape, for example mountain tops or alternatively towers. High structures are generally less suitable because they can sink and change their inclination and thus the position of the elevated point. For each of these points, the angles between all triangle sides ending here are determined with a theodolite by aiming at the other points on the side. To do this, the points must have a clear view of one another.

But only then are the positional relationships between the points determined. The network could still be moved and rotated as a whole on the surface of the earth. Therefore one more fundamental point is chosen. Using astronomical observations, its exact position in the geodetic graticule and the north deviation of the direction ( azimuth ) to another fixed point are determined.

As a rule, the triangular network is overdetermined, that is, not only the triangles are determined that are necessary for a simple coverage of the measurement area, but all that result from the mutual observability of the points. In this way, the accuracy can be increased by a compensation calculation.

In order to be able to use the trigonometric formulas at all, the calculation must be carried out on a mathematically describable surface, the figure of the earth . At first a sphere was used as a first approximation, then an ellipsoid of revolution, one axis of which coincides with the axis of rotation of the earth. If you put the length of these axes into the equations, you can find the best-fitting ellipsoid by minimizing the errors that occur.

The triangular network determined in this way is the first order network . Since its points are very far apart, it is again condensed by triangulation to form a 2nd order network with a point spacing of the order of magnitude of 10 km, and this in turn to further networks with terrain-dependent point spacings.

These points can then be used as fixed points for small-scale measurements, and in this size range you can also calculate with the formulas of plane trigonometry, i.e. H. Assume the sum of the interior angles to be 180 ° and calculate the sides of the triangle using the sine law .

History of triangulation in geodesy

The basics of trigonometry go back to ancient times. Hipparchus of Nicaea (died 120 BC) and Menelaus of Alexandria (approx. 100 AD) defined the first connections within the shape of a triangle. Ptolemy expanded this knowledge. He also made a first transfer to geographical purposes: he determined several thousand places on earth with angular coordinates.

In the Middle Ages, the knowledge was picked up again in Europe, presumably through contact with Arabs. At first the knowledge was only used for astronomy, but in the late 16th or early 17th century, for example, Bartholomäus Pitiscus devised an application in the field of geodesy and geography .

First put WILLEBRORD SNELLIUS (Snell; 1580 to 1626) to this order using the method of triangulation, the length of a meridian arc to measure and hence the circumference of the earth. Due to some measurement and calculation errors, the result was still relatively imprecise.

After a few other surveyors who used this method, triangulation broke through in land surveying at the end of the 17th century. The first Europe-wide triangulation networks emerged, with Jean Picard (1620–1680) and the Cassini family as pioneers . Detailed and particularly accurate recordings such as the Tranchot - v. Müffling map or the triangulation of the Kingdom of Hanover emerged primarily at the beginning of the 19th century, especially in the course of the establishment of conventional administrations in European states, e.g. B. in Prussia . Land surveying was institutionalized across Europe through triangulation, when in 1864 and later various states committed themselves to mutual cooperation, re-measurements and reorganizations with the treaty for the “Central European Degree Measurement ”.

Triangulation is still the basis for land surveying today. However, today localization is mostly done using satellite-supported systems (e.g. GPS ). Distance measurements have often been made by electronic distance measuring devices since the late 1960s . The results of the various measurement methods are often combined.