An approximation to the shape of the earth that can be mathematically defined as easily as possible is called an earth figure (or earth shape ) . Such a reference surface is required in many areas of the geosciences for calculations and for position information.

The first thoughts on this are likely to go back to South American civilizations , India and Babylonia , but above all to the Ionian natural philosophy . Instead of the prehistoric notion of a “ disk of the earth ”, the model of the “globe” appeared during ancient Greece .

A theoretical ideal "globe" ( globe ) is a rake surface for the sciences only suitable because the earth by its rotation to the Poland is flattened by about 0.3 percent. This flattening would hardly be noticeable with the naked eye from space, but it actually makes up over 21 kilometers.

The zonal deviations from the usual “mean earth radius ” of 6371 km are between –14 km at the poles and +7 km at the equator . With a spherical radius of 6368 km you would decrease to –11 km / + 10 km (two-dimensional view), but this would result in values ​​that are far too small for the surface and volume of the earth ( three-dimensional view: when calculating surface and volume is possible in each case the distance of the element under consideration from the earth's axis ). The sphere of the same volume as our planet has a radius of 6371.2 km; the radius of a sphere with the same surface deviates by a few meters.

Therefore, spherical models for the earth are only useful if no accuracy better than 10 km is required. Even for the maps in a simple school atlas you need a model that is about ten times better, and especially for location information with geographic or Gauß-Krüger coordinates .

The geocentric and geographical latitudes differ by up to 0.19 ° or 22 kilometers.

In principle, the shape of the earth can be defined in several ways:

The first two options are ruled out in practice because they are too complicated for the majority of applications. Calculations on an inclined, variably inclined surface require significantly more effort. The digital terrain models (DGM, international DTM ) required for this have only been sufficiently accurate and available worldwide since the 1990s.

Visualization of the geoid

The third option is usually ruled out - despite the relatively even sea level - because this area is mathematically too complicated. A superposition of spherical surface functions , which represents the sea level with an accuracy of 2–4 km, already requires a formula group with 2 10  = 1024  coefficients . For an accuracy of ± 1 km, the effort increases to at least ten times, i.e. 100 times the computing time.

Nevertheless, "Variant No. 3" is used for special purposes ( oceanography , physical geodesy and geoid research ). It corresponds to a mixed physical-mathematical model.

For practical use, the geoid is determined by its deviation from a reference ellipsoid within the framework of a geoid determination: the vertical deviation (difference between ellipsoid normal and plumb line) and the geoid undulation (height difference between ellipsoid and geoid) are specified in a regular grid . Thus, despite the irregularities in the gravity field, precise surveying networks can be calculated and combined with gravimetry . 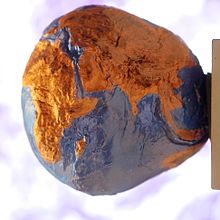 Three-dimensional model of the “Potsdam Potato” (2017) with a 15,000-fold exaggerated representation of the earth's surface, German Research Center for Geosciences

In June 2011 the German Research Center for Geosciences (GFZ) in Potsdam published the heavy model EIGEN-6C . This global model was created from the combined data of various satellite measurements from LAGEOS , GRACE , GOCE and other measurement methods and has a spatial resolution of around twelve kilometers.

An oblate ellipsoid of revolution

After all this, model no. 4 remains , which is the basis for the vast majority of applications and calculations: a not physically , but purely geometrically defined rotational figure, which is defined by the two axes equatorial radius  a and polar radius  b .

The specific values a and b depend on the respective region, because the mean curvature of the earth can differ by up to two kilometers within one continent . Details on this can be found in the articles on the ellipsoids by Bessel (1842), Clarke (1866/1880), Hayford (1924) and Krassowski (1940) as well as the GPS models GRS 80 and WGS 84 .

The last-mentioned reference systems are intended for global measurements (e.g. with satellites ) or for space travel . For the national survey of individual states, that of the aforementioned reference ellipsoids that is best adapted for the respective country, or one of about one hundred more , is usually used. The reference ellipsoids differ from one another by up to 1000 meters, so the corresponding reference system should always be specified for more precise location information.

In geoscientific literature since 1900 and in practice, the earth figure is - depending on the subject and research area: