A reference ellipsoid is an ellipsoid flattened at the poles , usually an ellipsoid of revolution , which is used as a reference system for calculating surveying networks or for directly specifying geographic coordinates. As a mathematical figure of the earth, it should approximate the area of ​​constant height (see geoid ), with the historical development going from regional degree measurement to global adjustment of the gravitational field .

The globe has been a scientifically recognized model of the earth since Greek natural philosophy . The first doubts about the exact spherical shape emerged in the 17th century; Around 1680 Isaac Newton was able to theoretically prove in a dispute with Giovanni Domenico Cassini and the Paris Academy that the earth's rotation must cause a flattening at the poles and not at the equator (see elongated ellipsoid ). The survey of France by Philippe de La Hire and Jacques Cassini (1683–1718) initially suggested the opposite. The empirical proof was only achieved in the middle of the 18th century by Pierre Bouguer and Alexis-Claude Clairaut , when the measurements of the expeditions to Peru (today's Ecuador ) and Lapland (1735–1741) were unequivocally evaluated. This first precise degree measurement also led to the definition of the meter as the 10 millionth part of the earth's quadrant , which, however, was “too short” by 0.022% due to inevitable small measurement errors .

In the 19th century, numerous mathematicians and geodesists began to deal with the determination of the ellipsoid dimensions. The determined values ​​of the equatorial radius varied between 6376.9 km ( Jean-Baptiste Joseph Delambre 1810) and 6378.3 km ( Clarke 1880 ), while the widely accepted Bessel ellipsoid resulted in 6377.397 km (the modern reference value is 6378.137 km). The fact that the differences exceeded the measurement accuracy of that time by five times is due to the location of the individual surveying networks on differently curved regions of the earth's surface (see vertical deviation ).

The flattening values , however, varied less - between 1: 294 and 1: 308, which means ± 0.5 km in the polar axis. Here Bessel's value (1: 299.15) was by far the best. Due to ever larger surveying networks, the result "leveled off" in the 20th century at around 1: 298.3 ( Friedrich Robert Helmert 1906, Feodossi Krassowski 1940), which corresponds to a 21.4 km difference between the equatorial and polar axes , while the Hayford Ellipsoid with 1: 297.0 was clearly out of line due to the type of geophysical reduction. Due to the great US influence after World War II, it was nevertheless chosen as the basis of the ED50 reference system, while the " Eastern Bloc " took the Krassowski values ​​as the norm. The latter were confirmed as the better ones in the 1970s by the global satellite network and global multilateralation (time of flight measurements on signals from quasars and geodetic satellites).

Reference ellipsoids are used by geodesists for calculations on the earth's surface and are also the most common reference system for other geosciences . Every regional administration and surveying of a state needs such a reference ellipsoid in order to

Since the physical earth figure, the geoid , has slight waves due to the irregularities of the earth's surface and gravitational field , calculations on a geometrically defined earth figure are much easier. The objects to be measured are projected vertically onto the ellipsoid and can then even be viewed on a small scale as in a plane . For this z. B. a Gauss-Krüger coordinate system is used.

The height indicates the distance to the ellipsoid, perpendicular to its surface. However, this perpendicular differs by the so-called. Perpendicular error of the real plumb line as a plumb line would pose. For measurements that are supposed to be more precise than a few decimeters per kilometer, this effect must be calculated and the measurements reduced by it. Depending on the terrain and geology, the vertical deviation in Central Europe can be 10–50 ″ and causes a difference between astronomical and ellipsoidal longitude and latitude ( or ).

In a geocentric, right-angled reference system, the origin of which is in the center of the ellipsoid of revolution and is aligned in the direction of the axis of rotation ( ) and the prime meridian ( ), then applies

Calculation of φ , λ and h from Cartesian coordinates

The ellipsoidal length can be determined exactly as

For a given , the height is as

Although this relationship is exact, the formula offers itself

rather for practical calculations because of the error

depends only on the square of the error in . The result is therefore several orders of magnitude more accurate.

For the calculation of recourse to approximation methods must. Due to the rotational symmetry, the problem is moved to the XZ plane ( ). In the general case, is then replaced by . 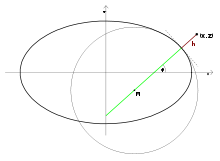 Ellipse with a circle of curvature. The length of the green route is .

This is an iterative solution because there and over are related. An obvious starting value would be

With this choice, an accuracy of is achieved after one iteration step

With a good choice of , the maximum error for points in space can be reduced even further. With

the angle (for the parameters of the earth) is determined with an accuracy of 0.0000001 ″ by inserting it once into the iteration formula (regardless of the value of ).

The ellipsoids used in different regions of the shape and size are generally produced by its semi-major axis and the flattening (Engl. Flattening ) set. Furthermore, that centrally located “ fundamental point ” has to be defined on which the reference ellipsoid touches the geoid and thus gives it an unambiguous altitude . Both definitions together are called " geodetic datum ".

Even if two countries use the same ellipsoid (e.g. Germany and Austria the Bessel ellipsoid ), they differ in this central point or fundamental point . Therefore, the coordinates of the common border points can differ by up to one kilometer.

The axes of the ellipsoids differ by up to 0.01% depending on the region from whose measurements they were determined. The increase in accuracy in determining the flattening (difference in the ellipsoidal axes around 21 km) is related to the launch of the first artificial satellites . These showed very clear path disturbances with regard to the paths that had been calculated in advance. On the basis of the errors one could calculate back and determine the flattening more precisely.

The Bessel ellipsoid is ideally adapted for Eurasia, so that its “800 m error” is favorable for the geodesy of Europe - similar to the opposite 200 m of the Hayford ellipsoid (after John Fillmore Hayford ) for America.

For many countries of Central Europe that is Bessel ellipsoid important also the ellipsoids of Hayford and Krasovsky (spelling inconsistent), and GPS - surveying the WGS84 .

The results of Delambre and von Schmidt are pioneering work and are based on only limited measurements. On the other hand, the big difference between Everest (Asia) and Hayford (America) arises from the geological geoid curvature of different continents. Hayford was able to eliminate part of this effect by mathematically reducing the isostasy , so that its values ​​were considered better than the European comparison values ​​at the time.