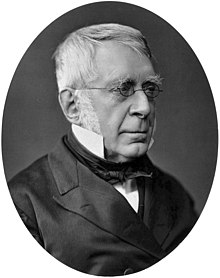 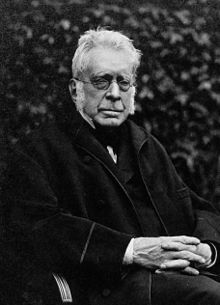 Sir George Biddell Airy (born July 27, 1801 in Alnwick , Northumberland , † January 2, 1892 in Greenwich ) was an English mathematician and astronomer . He made significant contributions to celestial mechanics , astrometry and optics .

Airy comes from a family whose ancestors lived in Westmorland in the 14th century . The members of the branch, which Airy belonged to, had to move to Lincolnshire as a result of the English Civil War and to farm in the following period.

Airy attended primary school in Hereford and then the Royal Grammar School in Colchester . A rich relative encouraged his further education and got him excited about physics .

From 1819 he studied at Trinity College of the University of Cambridge . Due to excellent performance, he was the best of the year several times. In 1823 he completed his studies and was awarded the "Smith Prize". The following year he took up the position of lecturer in mathematics at Cambridge . In December 1826 he took over the Lucasische Chair of Mathematics as the successor to Thomas Turton . However, he only held the chair for a little over a year, since he was appointed Professor of Astronomy and "Experimental Philosophy " in February 1828 and took over the management of the newly established Cambridge Observatory .

At that time, the observatory's only telescope was a “ passage instrument ” for determining star positions. Airy used it to carefully take measurements, which he published annually. In 1833 a quadrant was purchased and the Duke of Northumberland bequeathed a high quality telescope with a 30 cm aperture to the observatory. The device was placed on a mount designed by Airy .

During his time at Cambridge, Airy dealt with mathematical, physical and astronomical problems. Among other things, he published treatises on the refraction of light by lens glasses (the so-called Airy discs are still used today to assess the quality of telescopes), the formation of rainbows and discovered the astigmatism of the human eye . He calculated the mass of the planet Jupiter and examined the orbital disturbances of Earth and Venus . The latter work was very important and led to the improvement of astronomical tables. The Royal Astronomical Society awarded him with their gold medal in 1833 .

In addition, he made a comparison of the advances in astronomy in England and other countries, which turned out very unfavorable for England.

His time in Greenwich

In June 1835 Airy was appointed Astronomer Royal and Director of the Royal Greenwich Observatory to succeed John Pond . The working conditions at the observatory were inadequate in Airy's opinion, so that he reorganized the entire operation. He revised the existing records, ensured the foundation of a library, had Richard Sheepshanks set up an equatorial telescope and set up an observatory to measure the terrestrial magnetic field .

In 1847 Airy had a telescope set up with an equatorial mount , which enabled better observation of the moon ; until then the moon could only be observed in Greenwich when passing through the meridian . In 1848 he invented a zenith prism for easier observation of stars at the zenith . In 1850 a meridian telescope with a 20.3 cm aperture and 3.5 m focal length was put into operation, followed by a telescope with a 33 cm aperture in 1859. From 1868 they worked in the field of spectroscopy in Greenwich and from 1873 on, photographs of the sunspots could be made.

Airy sifted through the extensive data of the lunar observations made in Greenwich from 1750 to 1830. The result was a summary of 8,000 observations made by his predecessors James Bradley , Nathaniel Bliss , Nevil Maskelyne and John Pond. The data were available to astronomers from 1846 and could be used for comparison purposes and to improve astronomical tables. The Danish astronomer Peter Andreas Hansen determined two further irregularities in the orbit of the moon around the earth at the Gotha observatory using the data. Thanks to Airy's influence, Hansen received financial support from the British Admiralty and was able to complete his famous Tables de la Lune ( moon tables ). Lunar tables were of great importance for the sea power England, because with their help the tides could be determined exactly. For his work Airy was awarded the gold medal of the Royal Astronomical Society for the second time in 1848 .

Another research object of Airy was the determination of the mean density of the planet Earth. He approached the problem with pendulums , which he made swing on the surface and in the depths. In 1826 he began experiments in the "Dolcoath Mine" in Cornwall , but the pendulum, which was placed underground, was buried. Another attempt had to be stopped because of water ingress. Airy was only able to continue his research much later. Another experiment probably took place in 1854 at Harton Pit, near South Shields . Airy found on the basis of the different oscillation frequencies that the gravitation at 383 m depth is greater than on the earth's surface. For the density of the earth he derived a value of 6.566 g / cm 3 (the actual value is 5.515 g / cm 3 ), and a model of isostasis can be traced back to him .

In 1872 Airy devised a method for the exact numerical determination of the lunar orbit, which he published in the news of the Royal Astronomical Society. It was based on Charles-Eugène Delaunay's numerical expressions for determining latitude , longitude and parallax , whereby terms had to be inserted into the system of equations. Determining the orbit required immense arithmetic and Airy published the results in 1886, at the age of 85. Shortly before, he suspected that his calculations contained errors, but due to his age he lacked the strength for a complete revision. In 1890, he resignedly announced that a serious error had crept in in the first calculation steps.

The Royal Greenwich Observatory gained worldwide recognition through Airy's activities. From 1872 to 1873 Airy was President of the Royal Astronomical Society. In 1881 he resigned from all official positions. He lived in the "White House" near the observatory until his death in 1892. 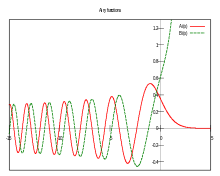 The following were named after Airy: