This article deals with the astronomical equipment, for the military uniform see there.

A mount is a device that is supposed to fulfill the following tasks in practical astronomy : 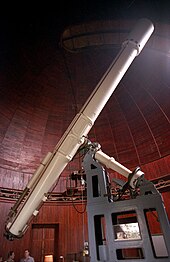 Equatorial mount of an amateur telescope

The equatorial mount, also called equatorial mount , is a device for holding and moving a telescope, in which, in contrast to other types of mount, one of the axes is aligned exactly parallel to the earth's axis.

Advantages of the equatorial mount

The inclined position of this axis, called the hour axis or right ascension axis , means greater mechanical effort, but has the advantage that the telescope can precisely track the apparent star orbits .

The hour axis is inclined with respect to the horizon by the angle of the geographical latitude of the observation location. It points exactly to the celestial pole , which is located in the northern hemisphere near the North Star. The second, perpendicular axis points to the celestial equator and is called the declination axis . The telescope and a counterweight are attached to it in such a way that the entire system is in mechanical equilibrium . The angle of rotation of the telescope around this second axis corresponds to the declination of the celestial coordinate of the star being targeted.

The parallactic (equatorial) mounting allows the apparent movement of the stars caused by the rotation of the earth during telescope observation to be compensated by a corresponding counter movement around only one axis, the right ascension axis. You can keep every celestial object in the telescope's field of view despite its movement ( tracking ). With other types of mount, for example azimuthal mounts, movements around at least two axes are necessary.

In the simplest case, equatorial mounts can be adjusted manually using a fine movement on the right ascension axis. In order to enable long exposure times of several minutes or even hours in astrophotography , it makes sense to use a motor drive. This requires an exact alignment of the mount, for example with the help of a polar finder . Stepper motors with appropriate controls make it possible to point the telescope at an object to be observed and to track it. Without such tracking, a line trace would be recorded and the objects would move out of the field of view . If the telescope is not properly aligned with the celestial pole , the field of view is rotated . Often there are partial circles on both axes in order to find the stars with the help of the coordinates.

Due to the inclination of the two main axes, the telescope can no longer be adjusted as easily as you would e.g. B. is used to a tripod . Problems can arise especially in the meridian : When crossing the southern meridian, the telescope has to be swiveled from the west to the east position at some point, because otherwise it will hit the mount and / or its height and thus the position of the eyepiece will be too low . This interrupts continuous observation, and the exposure of photographic recordings must also be canceled.

Similar problems arise at the north meridian, especially in the area of ​​the pole, when a certain position has to be reached. In order to reach an object that is only a few angular degrees away from another in the vicinity of the pole, it may already have to be turned around again. In telescopes with a lateral view, such as Newtonian telescopes , the view is often in a position that can no longer be reached after pivoting; the tube (the telescope body) must then also be turned in the pipe clamps .

Parallactic mounting types and their adjustment

Different variants of the equatorial mount have been developed for different observation instruments:

For the correct alignment of the German and other mounts, a polar finder is sometimes used with smaller mobile instruments . Instead of a small telescope, a thin metal tube that is aligned with the Pole Star is sufficient. If the installation of a polar finder is not possible, the Scheiner method can be used for precise adjustment . It is observed whether the star orbit in the meridian of the instrument is exactly horizontal.

For stationary instruments (at observatories or earlier time services) for accurate orientation of the hour axis are also Miren used.

If you have a little manual skills, you can also build an equatorial mount yourself. The example on the right for a 10 cm Newtonian telescope has a stability of around 5 "even in light winds and allows manual tracking of around half an hour. The Swiss astronomer Hans Rohr has created very good construction documents for heavier metal mounts . The "barndoor" assembly is particularly easy , in the simplest case it consists of a threaded rod, a hinge and two boards.

Azimuthal mounting of a telescope in fork mount with fine adjustments in both axes
→ Main article : Altazimuth

Azimuthal mounts, also called altazimuth mounts or altazimuths , have a vertical main axis ( standing axis ) around which the entire system can rotate. The observation instrument itself can be pivoted around a horizontal axis between the horizon and the zenith . These mounts are mechanically simpler and more stable. However, it must be accepted that the movements around both axes must take place at constantly changing speeds. In addition, the field of view of the observation instrument rotates. This means that for astrophotography or measuring devices on the observation instrument, it must also be rotated by motor. However, these control problems can now be solved by using appropriate computer technology. The largest telescope systems have azimuthal mounts.

Also fork mounts are aligned in azimuth, but can with a wedge are additional or upgraded and are then aligned Equatorial.

"Old-old mounts" are also conceivable. The name is derived from old for height (ger .: altitude ). The main axis is horizontal. This means that the observation instrument is swiveled vertically around this axis as well as around a second axis running perpendicular to the first. This type of mount is more of theoretical interest. 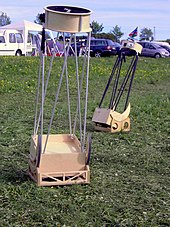 The Dobsonian mount is a very simple form of the azimuthal mount and was developed by John Dobson in the 1950s . The reason for their development was that the best possible mount for telescopes with a large aperture should be created. For the astrophotographic field, this type of mount is only suitable with an equatorial platform. Short-term exposures on the moon and planets (bright objects) are possible with the help of a digital camera without tracking. The non-fixed tube becomes so top-heavy due to the camera attached to the eyepiece that it has to be stabilized with the help of weights. The main advantage of this mount is its low price and compact design. See also: Dobsonian telescope .

The hexapod mount is rarely used as a pure telescope mount. The movement of the observation instrument does not result from rotating around two axes, but from changing the length of six hydraulic cylinders . The demands on the precision of the variable-length elements are very high compared to the mechanical effort required for a different type of mounting.

A prototype of an astronomical hexapod telescope with a primary mirror diameter of 150 cm was developed by Krupp in cooperation with the University of Bochum. It was extensively tested in Bochum from 1999 to 2004. Developing suitable software in particular turned out to be complicated. In summer 2004 it was dismantled and brought to Chile to Cerro Armazones, a telescope location of the Universidad Catolica del Norte, where it is to be used for astronomical observations by the Bochum institutes.