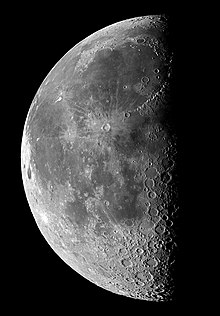 The moon , the closest star to earth , is a popular object in amateur astronomy.

The amateur astronomy is a hobby of lovers astronomers operated, which in contrast to professional astronomers do not pursue professional interests with their work. Intensive nature experiences under the starry sky are combined with the use of very different optical and astronomical instruments. The spectrum ranges from free-eyed observations (constellations, variable stars, Milky Way, meteors, etc.) to the use of simple binoculars (star clusters, gas and dark nebulae, comets) to highly developed telescopes , complex astrophotography and self-made electronic controls for telescopes or radio astronomy . The activity usually also includes the graphic or arithmetic processing of one's own observations and the study of specialist literature.

For many years it was run by a tiny minority of enthusiasts. Since the beginning of the 20th century , amateur astronomy has developed into a widespread hobby, especially in the USA , and since 1950 also in Europe . In addition to the generally growing interest in the natural sciences and space travel , the falling prices of astronomical instruments as a result of their mass production also contribute to this.

Today, the field of activity of amateurs is fanned out in different directions, such as the free-eyed observation of meteor streams , the holding of public star tours , the observation of lunar or solar eclipses , comets, double stars , satellite tracking ... and especially the visual observation of the night sky, which often with large, self-made reflector telescopes . Since about 2000 the photography of celestial objects ( astrophotography ) has increased in importance, v. a. because of the availability of suitable CCD cameras.

The amateur astronomers also take on scientifically relevant tasks - such as monitoring variable stars, the structures on Jupiter or star coverings by the moon, tracking and orbital measurement of comets or the recovery of lost asteroids . A special hobby of friends of patient precision work is the DIY telescope, the amateur telescope making . Some astro clubs offer their own courses on mirror grinding .

Unlike professional astronomy , scientific research is not the primary goal for amateur astronomers. But it is possible to get scientific results and many amateurs contribute very successfully to the overall knowledge of astronomy. Astronomy is even often described as one of the last scientific fields of activity in which amateurs can still make contributions.

In particular, amateur astronomers can often perform such tasks as monitoring the change in brightness of variable stars , tracking asteroids, and monitoring star occultation to determine the shape of asteroids and the surface of the moon.

Until recently, amateur astronomers played an important role in the discovery of new comets . Recently, however, projects like Lincoln Near Earth Asteroid Research and Near Earth Asteroid Tracking have resulted in most comets being tracked by automatic search systems long before they can be seen by amateurs.

The same thing happened to the amateurs in the field of supernova search . Most supernovae these days are no longer discovered by amateurs, but are found using automatic search systems, such as the Katzman Automatic Imaging Telescope (KAIT) at the Lick Observatory .

Einstein @ home is an open scientific astronomy project for amateurs without specific instrumentation .

Amateur astronomers do not deal with astronomy full-time, but out of scientific interest .

Fields of activity are z. B.

Amateur astroms sometimes have well-equipped private observatories with powerful telescopes. Formerly reserved for wealthy star lovers and equipped with a dome , today they are often built as a garden or roof observatory - or as a low hut with a sliding roof .

Installations of the Astrofarm Kiripotib ( Namibia )

M 8 ( Lagoon Nebula ), example of an astro image taken on an astro farm in Namibia

Often the astronomical hobby is combined with the photographic hobby. By using CCD technology, light-sensitive webcams and computer-aided image processing , some amateurs today achieve results that a decade ago were only available to large research observatories. In this way, detailed images of the planets or extremely faint objects such as gas nebulae or distant galaxies can be displayed. For this purpose amateur astronomers travel to Namibia , for example , because the conditions there are particularly good for star photography. In Namibia there are more and more astronomical farms that offer astronomers the necessary infrastructure, accommodation and catering that is adapted to the work rhythm.

The observations made by amateur astronomers sometimes complement scientific research . B. the observation of variable stars or the determination of the orbit data of asteroids . A variety of minor planets and comets have been discovered by amateurs. One example of this is the discovery of the minor planet (5) Astraea by the postmaster Karl Ludwig Hencke ; The doctor and astronomer Heinrich Wilhelm Olbers , who discovered asteroids No. 2, 4 and the dynamics of comet orbits, also began as a hobby astronomer.

One of the world's best known amateur astronomers was the Englishman Patrick Moore , who published numerous books on astronomy and has hosted an astronomical program on the BBC since 1957 . Numerous good non-fiction books and other publications come from amateurs, among which the names Bruno Bürgel , Rudolf Brandt , Hermann Mucke , Günter D. Roth and Oswald Thomas deserve special mention.

Contrary to the cliché that “stargazers talk to the stars alone at night”, many amateur astronomers are sociable. They organize themselves

In terms of numbers, the largest association in Germany is the Sternfreunde Association , in neighboring countries the Austrian Astronomical Association and the Swiss Astronomical Society . Some periodicals are also published by astronomical associations, e.g. B. in Stuttgart the journal for astronomy and in Vienna the star messenger .

Many larger astro clubs hold annual meetings for their members and interested guests. There are also nationwide such conferences, for example

Some books to get you started in the field: