Heinrich Wilhelm Matthias Olbers (born October 11, 1758 in Arbergen near Bremen, † March 2, 1840 in Bremen ) was a German astronomer and doctor . He developed methods for determining the orbit of celestial bodies , discovered the asteroids Pallas and Vesta as well as six comets and formulated the Olbers paradox .

Olbers was born as the eighth of sixteen children of pastor Johann Georg Olbers, who worked in Arbergen . In 1760 the father was appointed to the Bremen Cathedral and the family moved to what was then the Free Imperial City of Bremen. Olbers attended the pedagogy , the Athenaeum and, from 1771, the Illustre grammar school . In 1777 he began studying medicine at the University of Göttingen .

He was already interested in astronomy as a schoolboy and as a ten-year-old observed the Great Comet of 1769 with fascination . As a student, he also attended astronomical lectures. In 1779, during a medical internship , he devised a method for determining the orbit of a comet , which he observed through a window while caring for a patient. A year later he completed his studies with a dissertation on the human eye . In 1781 he opened a doctor's practice on Bremer Sandstrasse. He married Dorothea Elisabeth Koehne (1767–1786) in 1785. She died the following year giving birth to her daughter Doris (Henriette Marie Dorothea Focke, née Olbers, 1786-1818). In 1788 he married Anna Adelheid Lürssen (1765–1820), with whom he had a son, the future Bremen Senator Georg Heinrich Olbers (1790–1861). After the early death of his daughter and that of his second wife, Olbers retired from working as a doctor in the seventh decade of his life.

Olbers telescope in the Focke Museum

Olbers devoted most of his free time to astronomy. Since he got by on only four hours of sleep, he was able to make extensive sky observations. He also evaluated all the records of conspicuous comets that had appeared since 1531. In 1797 he published the treatise on the easiest and most convenient method of calculating the orbit of a comet . The work was published again in 1847 and 1864. The method described in it can still be used today. In 1797 he was elected a member of the Leopoldina .

In 1800 the Astronomical Society was founded in the Lilienthal observatory near Bremen at the suggestion of Franz Xaver von Zach . The first president was Johann Hieronymus Schroeter , founder and owner of the observatory, which at the time was considered to be excellently equipped. Other founding members were Olbers, Ferdinand Adolf von Ende , Johann Gildemeister and Karl Ludwig Harding .

In addition, eighteen other leading European astronomers were appointed members. The aim of the society was to find unknown celestial bodies in our solar system , in particular a suspected planet between Mars and Jupiter . For this purpose, the sky was divided into 24 sections and closely examined in the vicinity of the ecliptic . On January 1, 1801, Giuseppe Piazzi discovered the first minor planet from Palermo , which was later named (1) Ceres . On March 28, 1802, Olbers (2) discovered Pallas and on March 29, 1807 (4) Vesta . The asteroid (3) Juno was discovered by Harding in Lilienthal on September 1, 1804 . In 1804, Olbers was elected a Fellow of the Royal Society .

Grave of Heinrich Wilhelm Olbers in the Riensberger Friedhof in Bremen

As a result of the Napoleonic Wars, Northern Germany came under French rule at the beginning of the 19th century . Olbers was appointed a member of the Corps législatif , the legislative assembly in Paris , in 1811 . In the period that followed, Olbers traveled to Paris three times to represent the Weser estuary . There he made the personal acquaintance of Napoléon Bonaparte .

After the French rule ended, Olbers resumed his astronomical activities in 1814. In the years that followed he discovered six comets, including the short-period 13P / Olbers , which will return in 2024. In 1822, Olbers was elected to the American Academy of Arts and Sciences and in 1823 to the Royal Society of Edinburgh .

Olbers' extensive library was bought in 1841 by Friedrich Georg Wilhelm Struve for the Pulkowa observatory . In 1997 it was badly damaged in an arson attack.

In 1823, Olbers formulated the Olbers Paradox named after him. He showed the contradiction that it gets dark at night, although assuming an infinite, transparent space with homogeneously distributed stars there would have to be a star at every point in the sky. The sky should therefore be brightly lit even at night when the sun is not visible . 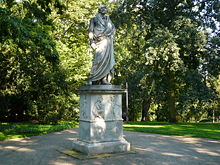 The Olbers monument in Bremen in the ramparts

Olbers was also the name of various sailing ships: A frigate built in Arkhangelsk was acquired by FC Delius & Co. in Bremen in 1829 and scrapped in 1837. A sailor built in Grohn in 1838 by the same owner , the full ship Olbers (1851) , had a crash in 1848. Later a three-masted barque of the Imperial Navy bore the name of the astronomer.