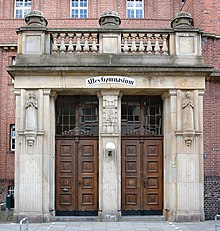 Entrance portal at the Kleine Helle

The location of the school was from 1875 to 1987 in Dechanatstraße 13/15 in the old town . Since then, this building has been the main building of the music area of ​​the University of the Arts .

The three-storey building was built from 1872 to 1875 according to plans by senior building officer Alexander Schröder in the historicizing style for the secondary school (pre-school, grammar school and business school).

The school building formed the backdrop for the feature film Ich bin ein Elefant, Madame (1969) by Peter Zadek , the building at the Kleine Helle 1993–1997 for the ARD early evening series Not von Bad Eltern and Aus gute Haus ; both produced by Radio Bremen .

The building has been a listed building since 1984 .

Since 1987 the school has been located on the site of the former grammar school on the Kleine Helle. Since 2006, after the University of the Arts moved to Überseestadt , the school has also been using the building at Am Wandrahm 23 . Among other things, a cafeteria for the students was built there. The school is now an all-day high school.

The building was built from 1914 to 1916 according to plans by Hugo Weber and Hans Ohnesorge for the first municipal college for girls in Bremen (Lyceum). The brick-faced building with its monumental pillar facade and the parapets decorated with terracottas is completed by a mansard roof. The three wings form a courtyard open to the northeast. Originally there were two gyms. To the east is the ballroom above. A terrace with three distinctive flower baskets is located above the intensely designed entrance area to the street. The girls' figures on the pillars of the portal were designed in Art Nouveau forms by the sculptor Rudolf Gangloff .

The building has been a listed building since 1984 .

"Anno 1528 is tho Bremen a frey school prepared dorch the erbaren Radt" - this is the message about the establishment of the old high school in an old chronicle. The old grammar school has existed for almost 500 years and it has a checkered history.

The “Schola Bremensis”, as it was called at the time, was a fruit of the Reformation . With the introduction of the new faith, the monastery schools responsible for education were also dissolved. Now the authorities in town and country should take care of the upbringing and education of the children and young people - according to the reformer Martin Luther . Initially, in the new "school of scholars", which was housed in the rooms of the former St. Catherine's Monastery , the focus was on studying the ancient languages ​​that are important for understanding the Bible: "Lectiones in Hebrew, Grekeschen and Latin".

After 1562 Mayor Daniel Buren the younger the Lutheran orthodoxy had overcome in Bremen, he opened the school for the offspring of the "common citizens people," and the Bremer Council approved a curriculum that "fundamenta Pietatis, linguae Latinae, Arithmeticae et Musicae" included. Johann Oldenburg from Münster († 1569) was the first rector of the Latin school. He taught with two other teachers. The main subjects were Protestant religion and Latin. Johannes Molanus from Flanders was one of the important teachers from 1553 to 1559 and the second rector of the Latin School from 1563 to 1583.

A helper from Buren was Christoph Pezel . In 1579 he was asked to settle the teaching disputes among the preachers in Bremen. In 1581 he stayed permanently in Bremen and in 1584 became superintendent . In 1584, Pezelius divided the school into an upper school class and a publica classis. The Latin school thus received an academic superstructure in the sense of a grammar school illustrious , in the Reformation period a hybrid of higher school and university. In 1595, with his help, the Consensus Bremensis , the reformed doctrinal and church order, was created. Pezel taught theology, history and ethics as a professor at the school.

The doctor Johannes Ewich (1525–1588) became the first professor of medicine at the grammar school in 1584 . His speech at the opening of the grammar school on October 15, 1584 has been handed down in print. In his letters and pamphlets he emerged with investigations into the nature of the plague from a medical and social point of view and as a critic of the persecution of witches .

When the school got into a crisis, the city council restructured the institute in 1610. In addition to a six-class elementary school, the Paedagogeum , there was the illustrious grammar school that built on it and enabled university studies in the four classical faculties of theology, law, medicine, and philosophy and philology. Now the school was also a university-like academy. The first rector was the theologian Mathias Martinius († 1630). With Gerhard Meier from Bremen, rector from 1655 to 1695, the school experienced a high point in its development.

The newly organized academic high school illustrious enjoyed a good reputation and attracted students from all over the place. In 1613 70 students had registered. The number of registrants then fluctuated between 27 and 106 in the years up to 1730. Then the number decreased drastically, in some years there were only 8 to 15 entries. In the Matrikel Album Studiosorum from 1610 to 1810 7,755 names are listed.

However, in the 18th century the college began to decline gradually. The competition from other universities such as Göttingen and the declining importance of a Christian-denominational higher education course gradually removed the floor from the grammar school illustrious, so that the pedagogue moved more and more into the foreground.

In his school history, published in 1928, Hermann Entholt paints a vivid picture of the conditions prevailing in the Paedagogeum: “[The pupils] ... often came as 'tender plants' at the age of three ... Around 1600 they were employed non-stop even on Sundays , with repeated church attendance and school-like lessons about what they heard, and in 1749, for example, the Quartans sat in school from 7 a.m. to 7 p.m., with only an hour's lunch break. For this they retaliated with tumult, stone throwing and 'inhuman hum' ... The writing was done on the knees, if not on the benches, as there were no tables yet. Geography was taught in such a way that only the textbook was read, without any map. For a long time there were no mathematics lessons at all, because there was no suitable teacher for it ... Of course the boys always spoke Low German to each other, 'the mob language' as the teachers said ... had to just to make ends meet financially. 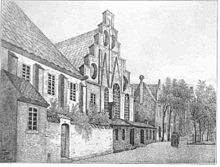 The former Lutheran Athenaeum (also Latin cathedral school ), from 1817 to 1858 school of scholars

The Eschenhof, former curia of the cathedral dean, since 1817 secondary school on the Domsheide; left some students

Around 1800 Bremen had a further secondary school in addition to the Paedagogeum, the Lyceum, which was founded by Lutherans in Bremen, which was predominantly Calvinist and which had emerged from the Cathedral School and the Athenaeum Bremen after 1803 . When the later mayor of Bremen, Johann Smidt, was responsible for education as a scholarch , he reorganized the Bremen secondary schools. In 1817 he combined the Paedagogeum and Lyceum to form the three-branch general scholar, action and pre-school, later called Hauptschule for short . The basis was the pre-school, in which boys from 8 to 14 years of age were taught religion, German, Latin, French, history, geography, natural history, mathematics and drawing. English and Greek were added as electives in the final year of preschool.

After that, the pupils could either attend the commercial school founded in 1802 , which prepared them for the commercial profession, or the scholarly school, which was soon to be called a grammar school , which created the prerequisites for university studies. The pre-school and business school were housed in a building belonging to the Domdechanei on Domsheide , the so-called Eschenhof .

For the time being, the school of scholars remained in the rooms of the Lyceum in the Kapitelhaus at the cathedral, but in 1857 it was also located in the Eschenhof and was now called the Gymnasium.

In 1875 all three branches of the secondary school moved into a new classical building, which was built on Dechanatstrasse and which was to house the school until 1987. In 1886 the preschool was closed and most of it was attached to the other two schools. A little later the commercial school was renamed to Oberrealschule . Now the secondary school under construction on Dechanatstrasse comprised only two branches of the secondary school and the upper secondary school, but these now had nine grades from sixth to upper primary. Growing numbers of pupils and changes in the school system in the German Reich prompted the Senate to reorganize Bremen's higher education system again in 1905; the grammar school was now officially called the old grammar school. With the New Gymnasium ( Gymnasium am Barkhof ) and the Bremen Realgymnasium on Kaiser-Friedrich-Straße (today Hermann-Böse-Straße), two other educational institutions were added to the side, which led to the Abitur.

During the Third Reich , the Alte Gymnasium was unable to completely oppose attempts to harmonize it, but the school's humanistic profile was largely retained. Many teachers and students kept an inner distance from the spirit of the times.

After the war, in which the school had not suffered too serious damage from bombing, teaching was resumed. However, the building soon turned out to be too small, so that the secondary school was relocated to Parsevalstrasse in 1958. But the lack of space remained. In addition, the building, which had long been neglected by the city, fell into disrepair. Therefore, as part of a program to close numerous high schools in Bremen, the Senate ordered the relocation of the old high school to the building of the high school on the Kleine Helle, which was closed at the same time. In 1987 the move was completed. The Music Department of the Bremen University of the Arts and the Klaus Kuhnke Archive for Popular Music are located in the building on Dechanatstraße .

The school seal of the old grammar school

The school seal of the old grammar school comes from the early days of the school, when it was still called "grammar school illustrious". In the form we know today, it dates from the 17th century, namely as an oblate seal on a quotation by Studiosus Ptolemäus Sticht from Jever on June 13, 1647. And as was customary in the past, a clear statement was made on the seal that refers to the origin and the aims of the school.

A golden lion standing upright on a red field forms the seal; in his right hand he holds the silver city key, in his left the open Bible. On the two leaves of the book you can read the first letters of the Latin text from the biblical book of Joshua (1,8): “Ne discedat liber iste legis ex ore tuo; sed meditaberis de eo interdiu atque noctu. ”The German translation reads:“ This code of law should not leave your mouth, but think about it day and night (and it goes on: so that everything you do is aligned with my instructions. Then you will Have success and everything you start will happily finish) ”.

Sorted by year of birth

Abitur class from 1876: in the middle school director Wilhelm Adolf Boguslaw Hertzberg (* 1813; third from the left in the second seated row); Ludwig Quidde in the first standing row, third from the right