Lahusen villa built in Delmenhorst in 1886

The North German Wool Combing & Kammgarnspinnerei (short Nordwolle ) in Delmenhorst was a major player for the processing of wool and worsted , which existed from 1884 to 1981. The buildings that have been preserved on the factory premises are one of the great industrial monuments in Europe and an important testimony to historic factory architecture. On the site of the disused factory, a district with modern residential developments was created in connection with the listed buildings. The Northwest German Museum for Industrial Culture is also located here.

In close proximity to the important trading hub of Bremen , the manufacturer Christian Lahusen founded the North German Wool Combing & Worsted Spinning Mill (NW&K, soon to be called North Wool ) in Delmenhorst on March 5, 1884 . The location turned out to be extremely suitable for processing wool , because the site was located between the railway line to Bremen, where the wool bought around the world was delivered by ship, and the Delme River , thus offering good transport options and sufficient water for washing the wool. Delmenhorst was also duty-free, in contrast to Bremen, where high tariffs were levied on finished goods.

Lahusen, who had lived in Argentina for a long time and had owned a wool processing company in Neudeck , Bohemia since 1873 , brought the wool from large Argentine sheep farms to Delmenhorst and processed the raw material here into fine yarn . Johann Heinrich Volkmann , who was a member of the board of directors until 1893 and then chairman of the supervisory board of Nordwolle from 1893 until his 70th birthday in 1912 , also had experience in the wool trade . Lahusen and Volkmann were recognized for their intensive church and social commitment, which was also reflected in the company's own welfare institutions that were later created.

In 1888 the son of the company founder , Carl Lahusen , took over the factory. Under his management, the Delmenhorst factory rose to a large scale within a few years. From 1897 onwards, several spinning mills, dye works and soap factories were affiliated and the company in Delmenhorst was constantly expanding. The number of employees grew rapidly, in 1887 there were 900, by 1911 already 3000 workers, civil servants, administrative employees and apprentices in the Delmenhorst plant. Within two generations, the family company developed into a group that produced a quarter of the world's raw wool yarn production in the 1920s and employed up to 4,500 people in Delmenhorst alone. In recognition of his achievements, Grand Duke Friedrich August II of Oldenburg awarded Carl Lahusen the honorary title of Privy Councilor of Commerce in 1912 .

The expansive expansion of northern wool and the poor pay meant that it was difficult to find German workers and workers from East Central European countries were recruited for factory work. The Delmenhorsters called the young girls and women from Silesia , Galicia and Bohemia “wool mice” who operated the doubling and twisting machines for a daily wage of 1.50 marks . Her male colleagues in the spinning mill earned a little more.

Due to massive immigration, the number of inhabitants in Delmenhorst tripled between 1885 and 1905. Extreme housing shortages and social misery were the result and notorious as the proverbial “Delmenhorst conditions”.

When Carl Lahusen died in 1921, his son Georg Carl Lahusen took over the management of the company, which was now based in Bremen. A few years later his brothers joined the board: Heinz in 1923 and Friedel in 1929 . The group was a stock corporation , but was ruled by the Lahusen brothers, under whose leadership the company experienced an unsound expansion with enormous capital requirements. Mismanagement and the global economic crisis with falling sales then drove the company into bankruptcy in July 1931 . Two prestigious buildings that G. Carl Lahusen had erected at the end of the 1920s also contributed to this: the corporate headquarters in Bremen (later the house of the Reich and today's tax office) and the palace-like pompous mansion Hohehorst with over 100 rooms in Bremen Switzerland , the Family from 1929 to 1931 served as a summer residence.

"Irregularities in senior personalities" and incorrect balance sheets were seen as the cause of the corporate crisis. The Lahusen brothers founded the Dutch company Ultra Mare , initially to cover up the profits from northern wool . In the crisis, apparent claims by the north wool against the Ultra Mare were used to make the losses of the north wool appear to be lower. The Reich government under Chancellor Heinrich Brüning had looked for ways to avert the bankruptcy and save the almost 20,000 jobs, but saw itself - also with regard to possible comparative cases - not in a position to compensate for the losses that were already too high. The losses were estimated at 180 to 240 million Reichsmarks , and so the collapse of the north wool far beyond Bremen triggered the so-called German banking crisis , in which various banks and the Bremen state suffered considerable financial damage. Bremen Senator Heinrich Bömers , who was related by marriage to Lahusens and died shortly afterwards, had to resign . G. Carl Lahusen and his brother Heinz Lahusen were arrested and sentenced to prison and fines in 1933.

For the house bank of the north wool, the Darmstädter und Nationalbank (Danatbank), the bankruptcy had the immediate consequence that they themselves became insolvent. The banks in Germany were closed for a few days. Danatbank lost 48 million Reichsmarks and was placed under Reich trust and taken over by Dresdner Bank the following year . The Schröder Bank was therefore insolvent and had to close.

On June 14, 1932, a creditors' meeting decided to found two successor companies. One of them was the Norddeutsche Woll- und Kammgarnindustrie AG (NW&K) with operations in Delmenhorst, Mühlhausen ( Thuringia ), Eisenach and Fulda .

In 1939, the National Socialists declared northern wool to be an armed forces operation. From then on, the company produced for the armaments industry and used foreign workers from the areas occupied by Germany for forced labor during the war .

After the end of the war, the company, whose operations had been lost in the GDR, was able to produce limited production again and was called Norddeutsche Wollkämmerei und Kammgarnspinnerei AG since 1950 . At the beginning of the 1960s, the sustained economic upswing led to a labor shortage in Germany. As a result, women workers from Spain were hired at low wages and poor conditions .

In 1970 there was a merger with the Düsseldorf worsted spinning mill to form the United worsted yarn spinning company (VKS) based in Bremen. Due to a structural crisis in the textile industry - production was increasingly relocated to low-wage countries - jobs were cut in Delmenhorst and production was finally stopped in 1981. The company Rehers ( Nordhorn ) formed a small operation from the bankruptcy estate , but it had to close in 1982.

The abbreviation Delespa has stood for Delmenhorst soap and perfume works since 1925 . When NW&K was founded, it was planned to further process waste products from washing the raw wool . In the potash house next to the wool laundry, the wool washing water was evaporated and chemically treated in order to use the fatty substances and the potassium compounds contained in them to produce potash .

In the located in the immediate vicinity since 1886 grease factory that was from the wash water initially wool fat obtained from 1896 and "chemical department" in a street at the Hasberger also Rohwollfette, wool fatty acids neutral fats and lanolin made.

In 1905, NW&K took over the Bremen fine soap and perfume factory Hoepner & Sohn and from 1907 expanded the chemical department as a subsidiary of the group. The product range expanded to include fine soaps, curd soaps, industrial soaps, washing powder, perfumery and cosmetic items such as toothpaste, etc.

The "Delespa" works no longer exist. 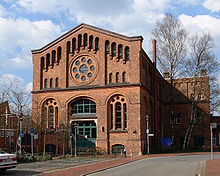 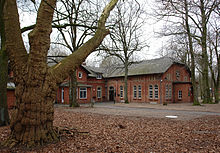 Factory architects and management created a functional and representative architectural style for the expanding company, in which the location, size and construction of the individual buildings were determined by their function and importance. The spatial boundaries of the site were determined by the railway line in the south and the Delme river in the west and north. The traffic connection and the water supply determined the orientation of the facility from south to north. For decades, the huge industrial plant with a total area of ​​around 25 hectares was one of the largest of its kind in Europe.

The Lahusen villa , in which Carl Lahusen and Mrs. Armine lived with their eight children until his death in 1898, was built in 1886 between a large park and the factory. Today's wool park - built by landscape architect Wilhelm Benque - was not open to workers and the public at the time.

After the north wool began to react to the housing shortage in the 1880s, the first workers' settlement Enclave was built in 1888 .

From 1893, the “city within the city” was created, the shed roof production halls and the power station, as well as the first so-called officials 'houses for operations managers and engineers and other workers' accommodation were built.

After high profits, which the group achieved in 1895, the establishment of a generous system of so-called welfare institutions began. a. a bathhouse, a hospital and a cooperative with a bakery belonged.

The construction of girls 'homes began in 1884 with a lodging house for 40 girls, followed in 1898 by a girls' home for 150 Eastern European single young workers. A house with 20 single rooms, a large garden and tennis court was built in 1900 for younger unmarried civil servants and commercial apprentices. It was a bachelor home, called a “men's boarding school”.

In 1902 the new machine house was built by the second works architect, Henrich Deetjen . The building, also known as the Cathedral of Labor , housed the 2500 hp steam engine until 1929 . It powered the machines in the production area via a flywheel , cable run and transmissions .

In the 1920s, larger workers' settlements emerged in the east and north of the area.

In order to do justice to the increased production volume, a new boiler house was built next to the turbine house in 1951/1952.

The entire complex, this largely self-sufficient "city within the city", created social security, but also dependency on the manufacturer, who could now control all areas of his workforce. To date, it has not been precisely researched whether the social institutions are to be seen as a reaction to grievances or as the fulfillment of a “great social task”.

Also worth seeing are the industrial buildings preserved from the 19th century on the entire area of ​​the Nordwolle, such as the workers' houses or the entrepreneur's villa.

The Northwest German Museum for Industrial Culture, which opened in 1996, is located on the site of the former factory, including the former light station from 1884 and the turbine house from 1902 . The history of North Wool is presented on an exhibition area of ​​around 3,000 square meters . Industrialization in the 19th and 20th centuries is also shown as an example. In the future, the textile history of the region is to be shown in all its breadth and linked to modern textile art projects. Since 2014 there has been a separate part of the exhibition on the history of the clothing industry in Delmenhorst, which was shaped by the company delmod , among others .

Museum director of the Northwest German Museum for Industrial Culture :

The route of industrial culture in the northwest began at the Northwest German Museum for Industrial Culture in 2010 .