Transmission wave in the windmill Stove

The transmission is a historic belt drive and is one of the traction drives . Typically, transmissions were used in early industrialization , the roots of the construction going back to antiquity. The drive belt (transmission belt) forms a central element .

Preserved transmission systems are today to be regarded as industrial monuments and documents of industrial history that are worth preserving .

In the pre-industrial times, water wheels , wind turbines and similar constructions were used to drive machines. Their performance was usually so low that generally only a single system was installed on the output side. For a second mill run, a second scythe hammer, a second drive wheel had to be created, or the first machine had to be shut down by switching. In the course of industrialization , central steam engines were built in many companies , whose comparatively enormous power could be used to drive many individual machines . Therefore, the production began to be grouped in factories .

Shafts made of steel and pulleys made of cast iron, which were connected by flat belts , the transmission belts made of leather , textile band or steel band, were used to transmit the centrally generated power . The transmission waves were preferably designed as a wave running on the factory hall ceiling, which was led through the entire hall, sometimes even into other buildings or floors. At the points where a machine was to be driven, a belt was brought down to this machine with a pulley.

Later, mobile steam engines, the locomobile , appeared, which could be used particularly in agriculture, but also in mining and elsewhere.

Many tractors - like the " Ur-Bulldog" from Lanz - were equipped with a detachable pulley until the 1950s and 1960s, which in stationary operation were used to drive a large number of additional devices (such as large grinder , threshing machine , wind sweeper , baler, hay and Crop conveyor , forage harvester (crop chopper ), stone crusher , (firewood) circular saw, cone splitter , water pump, workshop machines , etc.) could be used. Thus, these tractors combined the advantages of a farm and tractor and a stationary drive motor for the operation of additional equipment and were sometimes still used in agriculture in the 1970s, in some cases even longer, until they were increasingly replaced by more modern, more powerful and more compact machines with their own Drive were replaced after electric drives with sufficient power or smaller combustion engines became increasingly affordable.

The transmissions were replaced by individual drives for the machines, which today mostly have electric motors and, in mobile use, mainly internal combustion engines. 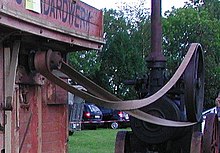 Belt drive for driving a threshing machine by a traction engine

As long as no individual drives were available, transmission was a prerequisite for industrial, machine-driven manufacturing and machining processes, as it was only possible through it, that provided by a central energy source (e.g. mill wheel, combustion engine, steam engine) To distribute energy to several machines and thus to dissolve the close connection between a consumer and “his” energy supplier.

Compared to the gear drive , which is often used in mills , this was able to transmit the required forces over longer distances with comparatively little use of material.

Compared to the fixed shaft from the waterwheel to the machine with control via the water supply, the drive machine could run with optimum efficiency and each consumer set its speed separately. The use of cascaded (stepped) belt pulleys (pulleys of different diameters right next to each other) made it possible to set different speeds on the driven machine. A simple type of coupling was created by arranging two identical belt pulleys next to one another, one of which, the idle or loose pulley, spins on the shaft . To engage the belt, a so-called belt switch was pushed onto the fixed pulley attached to the shaft , and to disengage it was pushed onto the empty pulley.

If the distance between the shafts was large enough, the direction of rotation could be changed by crossing the belt. Inclined positions of the shafts to each other could also be compensated for by twisted belts without problems. For further advantages see belt drive .

One disadvantage, however, was and is the slip , which leads to transmission losses and is excluded in the case of gear wheels or fixed shafts. Further disadvantages are high idling or partial load losses due to the large number of bearings and belts that always had to run, maintenance requirements and wear (bearing lubrication, belts). In order to achieve even wear, flat belts were often made as Möbius strips.

The transmission represented a considerable danger for the workers in the factories: Especially when power was transmitted with belts, loose pieces of clothing or long hair were repeatedly caught, which led to severe or fatal injuries. In addition, it could happen that the belt jumped off the shafts and running wheels and caused serious injuries to the workers standing nearby due to the abruptly released forces. Transmissions (belt and gear drives) are therefore only allowed to be operated in enclosures (boxes or grids) today.

Transmission systems, especially when powered by hydropower, do not have a quick emergency shutdown . For further disadvantages see belt drive .