This article deals with the machine element; for further meanings see coupling (disambiguation) 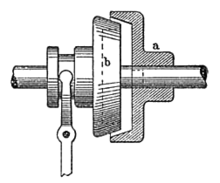 A coupling is a machine element for the rigid, elastic, movable or detachable connection of two shafts . A non-rigid coupling can also be a non-positive connection in addition to a form -fitting connection. The connection makes it possible to transfer rotation and thus torque and ultimately mechanical work between the two shafts .

The single-plate dry clutch , which is mostly used in motor vehicles , is a friction-locked clutch that can be released during operation. This is used to interrupt the flow of power between the engine and manual transmission when the gear is changed or the vehicle is to be stopped with the engine running. When starting up, the friction-locked connection is continuously increased with the "slipping" clutch until the fully engaged state is reached.

In contrast to a transmission with different input and output speed or input and output torque , couplings torques and speeds only transmitted but not walk. This means that the speed and torque on the clutch input shaft are greater than or equal to the values ​​on the output shaft.

In general, every connection between two shafts is a coupling, but colloquially only a releasable coupling is usually referred to as such (for example in a motor vehicle).

In addition to rigidity and releasability, a coupling can have other functions:

Motor vehicle clutch , open
at the rear: engine with flywheel (with ring gear for the starter )
Middle: clutch
disk at the front: cover (pressure plate and plate spring partially covered) 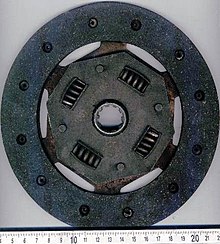 To change the gear stages ("gears"), the torque transmission must be interrupted so that the desired gear pair (= gear) can be brought into mutual engagement. With today's synchronous gears, the necessary speed adjustment of the two gears is done with the help of synchronizer rings . When the connection between the engine and the gearbox is re-established, any speed difference is bridged by brief slip in the clutch.

A clutch disc (3) provided on both sides with annular friction linings is usually clamped between two discs attached to the engine crankshaft (1). One disk is the flywheel (2) rigidly connected to the crankshaft, the other is the so-called cup / pressure disk (4) that rotates with it and is pressed against the flywheel by a diaphragm spring (5). The clutch disc is torsionally rigidly connected to the gear shaft (6) by means of a toothed clutch .

Torsionally flexible coupling in a coupling disc (not detachable)

The outer part of the clutch disc with the friction rings is connected to the hub with the toothing for the connection to the transmission input shaft in a torsionally flexible manner. The built-in compression springs absorb torque and rotational speed surges.

Other non-releasable couplings in motor vehicles

A cardan shaft is usually used to transfer the power from the front engine to the rear-wheel drive . This is connected to the output shaft of the transmission with a universal joint. This angularly movable coupling allows the sprung vertical movement of the rear axle relative to the basically permanently installed transmission. The or another cardan joint can also be located in a split cardan shaft.

If the driven rear wheels are not connected to a rigid axle, but move elastically against the vehicle individually, the two semi-axles are also often connected by means of universal joints on the rear axle differential and on the wheels.

With front-wheel drive , the wheels are vertically sprung and are also steered. Because the transmission of rotation fluctuates too much over one revolution in an angled position, uniformly transmitting homokinetic joints are used.

The hardy disk is related to the universal joint. It contains a rubber washer that is elastically deformed in the event of angular deflections between the two shafts and torsional jolts.

Centrifugal clutch of a chainsaw Release when the speed falls below
a minimum
1 friction segment, 2 radial coupling, 3 tension spring 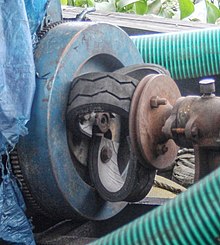 An improvised , non-releasable elastic coupling made of pieces of tire connects the shafts of a motor and a water pump. It compensates for the offset of the waves or their non- alignment . Recorded in Kerala ( India )

Non-releasable couplings can be flexible in various ways:

Differentiation between force and form fit

Non-positive clutches (friction clutches) are particularly suitable as detachable clutches and self-releasing clutches (slip clutches) in the event of overload (which also includes starting and starting up). They can have more than one or two non-positive surface contacts (for example when equipped with several slats). The contact surfaces are flat or conical.

Positive couplings are built more simply. They exclude slippage in the transmission, but offer no protection in the event of overload (except for an additional predetermined breaking point, for example with a shear pin). Embodiments are, for example, dog clutches and tooth clutches . Positive couplings that yield to positional errors and jolts are correspondingly more complex, for example the Hardy disk, the metal bellows coupling , the universal joint, the constant velocity joint, the parallel crank coupling and the Oldham coupling .

A special feature compared to the generally mechanical couplings are the viscous coupling and the fluid coupling . They are not rigid, which is why they should be counted among the frictional mechanical clutches, but they permanently have a slip of the order of 10%.