Karl Benz is a redirect to this article. For other people see Karl Benz (disambiguation) . 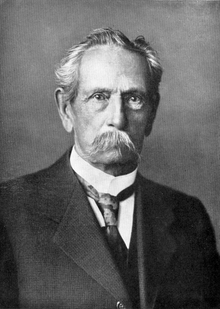 Carl Friedrich Benz (born November 25, 1844 in Mühlburg as Karl Friedrich Michael Vaillant , † April 4, 1929 in Ladenburg ) was a German engineer and automobile pioneer . His Benz Patent Motor Car No. 1 from 1885 is considered the first practical automobile . On January 29, 1886, he applied for a patent for his motor vehicle.

From his mechanical engineering and automotive company Benz & Cie. was created in 1926 through the merger with Daimler-Motoren-Gesellschaft , the Daimler-Benz AG (now Daimler AG ).

Carl Benz was born out of wedlock as Karl Friedrich Michael Vaillant on November 25, 1844 in the city of Mühlburg (today a district of Karlsruhe ) . The name Karl Friedrich Michael Wailand was accidentally entered in the church register of the evangelical parish of Mühlburg . His parents were the Karlsruhe maid Josephine Vaillant and the locomotive driver Johann Georg Benz, born in 1809 . The mother was Protestant, the father Catholic. Johann Georg Benz came from Pfaffenrot (today the municipality of Marxzell ), where his ancestors had operated a forge for generations . He worked for the Baden Railway .

According to the church register, the baptismal witnesses were the "citizen, host and brewer" Michael Kramer from Mühlburg and the master shoemaker Karl Axtmann from Karlsruhe, whose ancestors come from Schielberg, very close to Pfaffenrot. It can be assumed that Michael Kramer was the mother's employer at the time and that his heavily pregnant maid continued to have quarters. His inn at Rheinstrasse 22 was probably the house where he was born. It was later named "City of Karlsruhe". It was demolished in the late 1950s.

On November 16, 1845, the parents married in the Catholic town church of St. Stephen . Michael Kramer was again the best man. The child was now called Karl Friedrich Michael Benz . (Carl Benz later preferred the spelling Carl and published his memoirs under the name Carl Friedrich Benz .) After the wedding, the parents and their child moved to Karlsruhe at Erbprinzenstrasse 13. Carl Benz was less than two years old when his father was in the summer Died of pneumonia in 1846 .

From 1853 Benz attended the science-oriented Karlsruhe Lyceum . His mother couldn't live on her meager widow's pension alone. In Karlsruhe she gave board and lodging to students at the Polytechnic . With this she also financed her son's education.

Marriage and first successes as a mechanical engineer

Karl Benz with his family 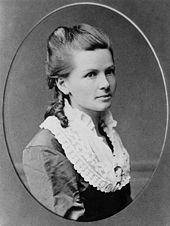 Carl Benz founded the iron foundry and mechanical workshop in Mannheim in 1871 with the funds of his future wife Bertha Ringer , which he later renamed the Factory for Sheet Metal Working Machines .

On July 20, 1872, he married Bertha Ringer. The marriage had five children:

Development and construction of engines

In 1878/79 Carl Benz developed a compressionless two-stroke engine . Because of the costly development work, his house bank requested the conversion of the company into a stock corporation in 1882. It now traded as a gas engine factory in Mannheim A.G. On the supervisory board of the newly established company, however, the designer found little understanding for his visions. Benz later wrote about this difficult time in his memoirs: “Only one person waited next to me in the ship of life in these days when things were about to end. That was my wife. Brave and courageous she hoisted new sails of hope. "

Benz therefore left the company and founded Benz & Cie. In 1883 . Rheinische Gasmotorenfabrik in Mannheim to produce its gas engines , which initially sold very successfully as stationary engines and secured the economic basis for further developments. 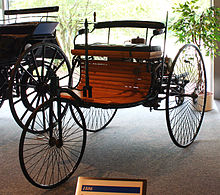 In 1885, Carl Benz built the first automobile with its four-stroke engine and electric ignition, the Benz Patent Motor Car Number 1 , a three-wheeled vehicle ( tricycle according to the patent text). It drove for the first time in Mannheim in the summer of 1885, as Bertha Benz affirmed again in writing in 1941. The vehicle had a valve-controlled single-cylinder four-stroke engine which, according to Benz, delivered an output of 0.67 hp at a speed of 250 rpm  . The vehicle thus reached a top speed of 16 km / h. On January 29, 1886, Karl Friedrich Benz wrote industrial history by registering a patent for this vehicle with the Reich Patent Office under number 37435 .

Although various steam vehicles and steam buses had been in use as commercial vehicles long before , a specialist publication came to the conclusion that Carl Benz designed the first practical passenger vehicle with the three-wheel patented motor vehicle number 1 . At first, however, Carl Benz received a lot of ridicule for his work. His motorized carriage was called " carriage without horses ridiculed". On the other hand, the general gazette of the city of Mannheim said in September 1886 that this vehicle will have a future because it “can be put into use without much ado and because it will be the cheapest means of transport for business travelers, possibly also for tourists, as quickly as possible ". Carl Friedrich Benz saw it similarly and steadily improved his vehicles. He further developed a light four-stroke engine , the differential gear and other motor vehicle elements, such as the kingpin steering , the spark plug , the belt shift as clutch , the carburetor , the water cooler and the gear shift .

Carl Benz received the world's first driver's license for his motor vehicle , issued on August 1, 1888 by the Grand Ducal Baden District Office. A few days later, his wife Bertha took the first successful long-distance automobile trip in the Benz Patent Motor Car Number 3 : She drove about 104 km with her sons Eugen and Richard von Mannheim to their native Pforzheim , where they arrived after 12 hours and 57 minutes, and back again. The Bertha Benz Memorial Route commemorates this journey today . The Wiesloch city ​​pharmacy on the way became the first petrol station when the local pharmacist supplied the group's vehicle with ligroin as fuel. Bertha Benz became a pioneer in automotive history alongside her husband .

In 1888 the new vehicle (“Complete replacement for wagons with horses!”) Became known beyond the borders of Germany through participation in the Munich power and work machine exhibition , but potential buyers initially remained skeptical. In 1889 the new Benz models were presented at the Paris World Exhibition. In France, which at that time had the best roads, the automobile began to spread.

The competing designer Gottlieb Daimler had developed the glow tube ignition together with his friend Wilhelm Maybach , an essential prerequisite for the further development of the four-stroke gas engine invented by Nicolaus Otto into a gasoline engine with high revs. Daimler had received a patent for the glow tube ignition in 1883. In 1896 he successfully sued Benz 'company for infringement of his patent. Benz & Cie. then had to pay license fees to Daimler-Motoren-Gesellschaft . Although Daimler traveled to Mannheim for the trial, Benz and Daimler did not get to know each other personally. Even when the two met again in 1897 on the occasion of the founding of the Central European Motor Vehicle Association , they did not speak to each other. In 1900 Gottlieb Daimler died. 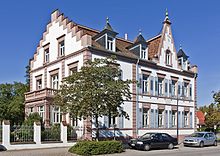 81-year-old Carl Benz on the patent motor car, Bertha next to it

In 1899 Benz & Cie. Rheinische Gasmotorenfabrik converted into a stock corporation ( Benz & Cie. AG ). Around 1900 it was the largest automobile factory in the world. Despite the tremendous success, Benz angrily withdrew from the company in 1903.

In 1906, Carl Benz and his sons founded the Carl Benz Söhne company in Ladenburg , which specialized in vehicle construction and is now home to the Dr. Carl Benz can be found.

On November 25, 1914, the Technical University of Karlsruhe awarded Carl Benz an honorary doctorate .

In 1926 Benz & Cie. and the Daimler-Motoren-Gesellschaft for Daimler-Benz AG founded by Gottlieb Daimler .

Carl Benz died at the age of 84 of complications from bronchitis on April 4, 1929 in Ladenburg and was buried there.

The spelling of the first name causes confusion. For example, there is a Karl-Benz-Platz in Stuttgart- Untertürkheim , which was originally written as Carl-Benz-Platz . The exchange of street signs in 1986 was initiated by Daimler-Benz . The then 60-year-old automobile company preferred Karl Benz as the historically better-founded spelling of the name. The first names Karl Friedrich Michael are recorded in the birth register of Mühlburg . Karl Benz is written on the gravestone in Ladenburg . There are therefore good reasons for using the spelling Karl .

Signature of Dr. C. Benz under the portrait in Memoirs

Today, however, the spelling Carl is predominantly used. The car pioneer has made sure of that himself. At the Polytechnic in Karlsruhe, he was still handwritten as Karl Benz in 1860 . At the end of the 19th century, however, the French spelling of German names came into fashion, Karlsruhe was spelled Carlsruhe . Since around 1881/1882, Karl Benz has mostly signed as Carl Benz . While Karl Benz zu Mannheim is still on his first patent from 1880 , the next patent from 1882 was issued to Carl Benz in Mannheim . The company, founded in Ladenburg in 1906, traded as C. Benz Sons . In 1925 the autobiography appeared with the name Carl Friedrich Benz in the title.

The Daimler AG uses the Group only the spelling since July 2010. Carl Benz . In 2007, the name Carl Benz School was introduced at the University of Karlsruhe, today's Karlsruhe Institute of Technology (KIT) , for the English-language Bachelor's degree in mechanical engineering . 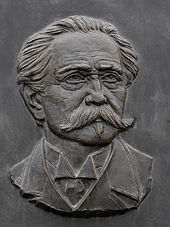 The stadium of the football club SV Waldhof Mannheim is named after him Carl-Benz-Stadion . The same applies to the Benz Pass , a mountain pass in the Antarctic. 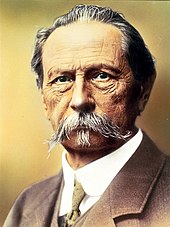