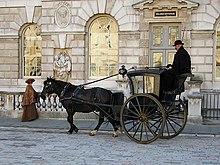 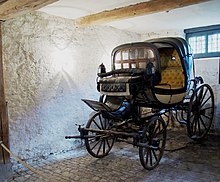 Goethe's Batarde - his carriage for city trips and smaller excursions

A carriage is a spring-loaded wagon , that is, a wagon pulled by draft animals , but in any case covered. A carriage can have one or two axles, a closed body or a movable roof . By definition, completely open horse-drawn carriages are not carriages.

Mail wagons were generously referred to as stagecoaches even in the “stagecoach era” even when the suspension was missing. Carriages are almost exclusively drawn by horses, with single and multiple horses .

The word carriage is derived from the Hungarian Kocsi "from Kocs " or from kocsi szekér "carriage from Kocs". Kocs is a village near Győr (Raab) . The irony of the history of language: the Hungarian Kocsi were light, unsprung wagons made of wicker. In Hungary, however, the elastic suspension of the car body was reinvented in the 14th century. When the covered wagon-like weather protection of the Kobel wagons was replaced by more elegant forms of the roof, the Hungarian name for modern wagons prevailed throughout Europe. The first German mentions are Cotschien Wägnen and Gutschenwagen in the first half of the 16th century, and since the second half of the same century the independent Gutsche, Gotzi, Kotsche, Kutz have also appeared. 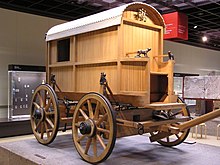 Advertisement for a carriage factory in Saxony, 1882

Stagecoach on the Gotthard Pass , Switzerland

modern chariot with pneumatic tires, longitudinal benches like in the classic horse bus and with a table

Even the Romans , at least from the 2nd century AD, used spring-loaded touring carriages. The technology was obviously lost with the decline of antiquity. In the 15th century, the suspension was reinvented in the Hungarian Kocs . The first written mention of the word kocsi (at that time still spelled kocsy ) dates back to the year 1469. From then on the carriages were continuously improved, whatever the development of the technology brought about. The great success of this comfortable coach - car , which spread quickly across the continent, reflected by the fact that were named in numerous European languages appropriate names for this Erfindungsort (and are still called that) such as coach (English) , Carriage (German), coche (French), cocchio (Italian), coche (Spanish).

A whole range of professions was involved in coach construction: e.g. B. wheelwright , carpenters , varnishers , liners and. v. A.

As a private vehicle, carriages have always been a status symbol , which was not only expressed by the car itself, but by the entire equipage . With the postal system appearing around the same time as the modern carriage , the stagecoach became the most important means of public transport in Europe and the New World for over two centuries .

By the end of the 19th century, the city of Columbus , Ohio, owned more than 20 companies that produced carriages, making one sixth of all carriages produced worldwide from Columbus. The Lindner Waggonfabrik in Halle has also made a significant contribution to world production: "By the end of carriage production in 1912, a total of almost 6000 vehicles had been delivered."

Until the end of the 19th century, carriages were the ultimate means of traveling overland. The wealthy British family of nursing pioneer Florence Nightingale , for example, undertook a trip to the European continent from 1837 to 1838, for which William Edward Nightingale had a six-horse traveling coach built, which, in addition to the Nightingale family of four, also had room for two maids , one on the roof of the coach Servant and a messenger. Only with the development of the automobile did the carriage slowly disappear from the street scene.

In very few countries the carriage is still an important means of transport. In Central Europe , team driving is practiced almost exclusively as a hobby or sport today . In the official timetable of Switzerland in 2005 there was still a carriage line (between Pontresina and Roseggletscher ).

From the carriage to the automobile

On March 8, 1886, the automobile pioneer Gottlieb Daimler ordered an Americain carriage from Wilhelm Wimpff & Sons in Stuttgart , which was delivered in August 1886. Originally intended as a present for his wife Emma, ​​it "ended" as the first four-wheeled automobile after Daimler installed an engine there .

Carriages used to be built individually by manufacturers to order from the customer. Only at the very end of the carriage era were at least individual parts manufactured industrially. Therefore historical carriages are always unique . The different car types are therefore not comparable with today's models in the automotive industry .

Nevertheless, there are some features to be able to classify a carriage:

two or one; uniaxial z. B. the Hansom Cab and, if provided with a hood, the Gig

Position of the charioteer

Drawbar seen from the driver's seat

As a coach box or shortly Bock refers to the seat of the carriage on which the driver sits while driving.

When using saddle horses , the charioteer could sit on one of the pulling horses and steer the other horses or, in the case of large teams ( 4, 6, 8 ... ), support the coachman as a so-called pioneer .

The suspension distinguishes the carriage from the wagon , the design shows the progress of the technology, but also the status (see also: Equipage ). The suspension makes the transport of people more comfortable and safer. Pulling is made easier for the draft animals.

The suspension of the car body on four posts by means of a leather strap was the first form of suspension. The posts were later replaced by leaf springs and finally spring packages .

Arrangement of the springs on the carriage frame 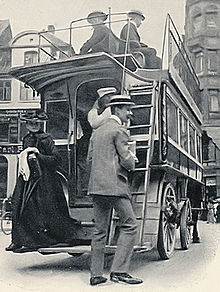 To delimit: The carriages do not include:

Pope's carriage in the Vatican Museums