The title of this article is ambiguous. Further meanings are listed under coachman (disambiguation) . 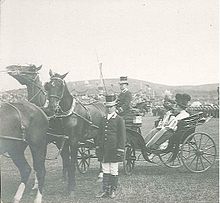 Württemberg court coach and pioneer in court uniform at a parade in Stuttgart, 1909

Eigenkutscher was a regional job title for a coachman with his own horse and carriage, who carries out transports for a fee. It's an early form of freight forwarder.

The leaders of rather slow vehicles for transporting goods ( carts ) are called carters or carters.

Today, the drivers of the teams in driving are often referred to as coachmen, but they refer to themselves as (team) drivers.