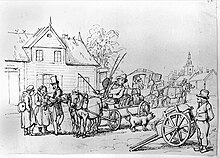 Horse-drawn vehicles in Sweden, around the mid-19th century

A truck driver was a man standing beside the commodified Fuhre also transported people. This was done with a cart , such as a horse or ox cart . The wagoners, as they were mostly called in the legal system, were subject to a number of laws and regulations as contractual partners in the transport of goods and people.

While in Roman times a highly developed infrastructure in the form of roads, changing stations for the draft animals ( mutationes ) and accommodations ( mansiones ) were available above all for the state-organized Cursus publicus and a clear legal framework was created, the early medieval carter was more likely worked for large manors, such as monasteries. The Prüm monastery in the Eifel had an extensive network of traffic connections for the transport of income from areas that were often far away, such as East Frisia. The transport of self-owned persons was handled, but also by owners of charities, whose duties included these transports. The typical manual and tensioning service (angaria) consisted of half a wagon load per hoof, which required four draw oxen.

When collar tension increasingly prevailed in the 13th century, starting from Western Europe, this made it possible to use horse-drawn carts with a considerably higher load, which could also cover longer distances more quickly. It was customary to use water and land routes for longer transports, which, however, resulted in high costs for reloading. The drivers were often hired by the organizers of this transport system for the respective freight and on site, as evidenced by the corresponding letters in the archive of the Tuscan merchant Francesco Datini . In the 15th century, the efforts of the more complex state organizations to set up a kind of state postal service intensified. This was particularly true for the transport of high-priced goods, but above all for the correspondence between traders. In 1331 the Florentine merchants in Lyon were able to get a messenger to connect the city with Rome every 12 days, which took 6 to 8 days. In 1442, a messenger still needed 5 to 6 days to travel from Rome to Florence. In the alpine valley communities there were regulated valley cooperatives which had a monopoly on transport, but which were also responsible for maintaining the roads and paths.

Since the wagoners, who belonged neither to state nor to private monopoly associations, concluded an individual contract with the person who wished to transfer goods, they were subject to the provisions of contract law. They were just as responsible for the safety and completeness of the goods as they were for delivering them undamaged to the right person at their destination and for having this confirmed in writing. If there was major damage to the goods, or if they were lost, the guilt or the degree of guilt of the driver was assessed and he was punished if necessary. If a passenger died in the 18th century and the driver was to blame, he was punished as if he had killed the passenger himself. However, if he was the victim of a robbery, he was exempt from punishment, provided he was not the mastermind behind the attack.

In the course of the consolidation of road traffic, regulations were increasingly being created before 1800 as to how the driver should behave in actual road traffic. In Wuerttemberg in 1808, for example, it was stipulated that he had to avoid an oncoming vehicle sufficiently, to the right of the road. Until 1826, however, a violation of this provision remained unpunished. In Switzerland it was determined in 1834 that every wagon "should avoid the oncoming wagon on the right hand across the middle of the street width". Upon shouting or cracking the whip, the slower driver should behave towards the faster driver who wanted to overtake. In addition, the carter should carry a “sound” when it is snowing, and a light “on very dark nights”.

In Cologne ever more stringent regulations emerged against overloading wagons, which was countered with a compulsory weighing system, or on the question of the brakes that were required for the "artificial roads" and which were called "inhibiting devices".

In the Oberbergischen the freight of the carters often consisted of black powder from the powder mills. Serious accidents could occur during the transport of this dangerous cargo, so every powder trolley had to be marked with a "P".

The dictionary of the German language from 1808 equates carters and carters. A carter is therefore the one who “drives or steers the cattle in front of a cart; the coachman, if the wagon is a carriage. ”The term Kärrner is particularly widespread in Franconia and Thuringia , also in the spelling Kärer, Karrer, Kärcher, which is derived from the Karre = carriage. In the Neuwied area , the name Schärjer was common for the men who loaded Rhine ships with pumice stones. This term is derived from "Schar", dialect for cart, or was taken from French (la charette). Schärjer and Karrner were unskilled workers of little repute and differed in this respect from the Schrötern , who were members of the guild .

In the German-speaking world, “ Kärrnerarbeit ” is a synonym for particularly hard physical work. In a figurative sense, it is used when solving a problem requires special effort.