The pumice or pumice stone (from Middle High German bimz from Old High German pumiȥ / bumeȥ [ ˈpumiȥ ] from the Latin word pūmex , genitive pūmicis ) is a porous (blistered loosened) glassy volcanic rock , which corresponds in its chemical composition to the obsidian and its density due to the numerous pores , which make up a substantial part of the volume, is smaller than that of water , which means that pumice floats in water. Its color can vary greatly: pumice made from basaltic lava with large bubbles is almost black, with increasing air content and decreasing bubble size the color becomes lighter, so that almost white pumice is also possible (for example in the north of Lipari or on Stromboli ), as well as all shades (about yellow-gray). Possibly penetrating the pore boundaries (also colored) deposits such as volcanic glass and crystals can occur.

Pumice is created by volcanic eruptions rich in gas , in which viscous lava is foamed up by water vapor and carbon dioxide. Chemically, pumice is no different from other lava (the chemistry can vary just as much as with lava), but it is significantly lighter (about a third of the density ) and often has a significantly lighter color than lava due to the pores caused by volcanic gases same composition. 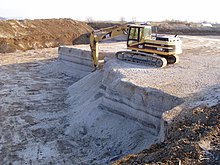 Pumice is mined in Germany in the Laacher See area and near Neuwied . In the Neuwied Basin , between the Eifel and the Rhine near Koblenz , it is stored under thick layers of loess . Deplete the loess is set aside on the most arable crops, the pumice in the open pit promoted and then again reclaimed the area with the loess soil. Therefore, the mining of pumice, unlike that of lava, for which valuable biotopes are destroyed, is not very harmful to the environment. There are occurrences worldwide near former large volcanoes z. B. in New Zealand Taupo (volcano) , around the remaining lake.

Pumice stone can get into the sea through rather constant land erosion, but also through acute volcanic eruptions. The particularly large eruption of the Tambora in Indonesia in 1815 threw so much pumice into the sea that even years later ships came across floating pumice rafts. In August 2012 in the South Pacific between New Zealand and Tonga, light floating pumice stone was spotted on a sea area of ​​463 × 55 km, which is attributed to the underwater volcano Monowai as a source.

In August 2019, the catamaran sailors Michael Hoult and Larissa Brill discovered a pumice stone carpet with an area of ​​150 km 2 and took samples of the 1–25 cm diameter chunks. NASA satellite images show that an underwater volcano erupted off the island state of Tonga on August 7th. The Queensland University of Technology (QUT) geologist Scott Bryan expects that micro- and small organisms will colonize the porous rock. At the end of August, the carpet was already divided into two areas and loop-shaped foothills and is driven 10–30 km per day on Fiji by ocean currents , waves and wind . Should the pumice reach the Great Barrier Reef off Australia in 7–12 months, as expected , it could enrich the reef with young corals, but it could also provide invasive species . These types of carpets appear in this region about every 5 years.

The use of pumice was very pronounced since the earliest times in Crete , where the sea was constantly pumice stones from the volcanic neighboring islands, since the second half of the 16th century BC. Especially from Santorini . Paul Faure reports that there were 15 types of use. The inhabitants of the coast collected among other things the washed up pumice stones as building material, cleaning agents, degreaser in the pottery , as a remedy for ulcers and drunkenness and to stop fermentation . It was also sacrificed to the gods in small bowls, such as the gods of the port Nirou Chani , those of Arkalochori in the area of ​​the large cult cave of the place and the gods of the city and port of Kydonia . The Cretans regarded the gray pumice as male, the white as female.

In ancient times, the pumice stone was used for personal hygiene, for treating the sick, for sharpening nibs and for smoothing parchment leather for books. In Spain and Asia, bricks for house building were made from clay containing pumice.

In the preface to the Critique of Practical Reason, Kant uses the Latin expression “ex pumice aquam”, which means something like: “To squeeze water out of pumice stone”, which he accuses people who want to squeeze necessity judgments from empirical statements.

Around the middle of the 19th century the industrial production began in the Neuwied Basin Schwemmsteinen of pumice. Its history has been documented by the German Pumice Museum in Kaltenengers near Koblenz since 2014 .