Abandoned opencast mine Zwenkau . The brown coal was mined in a counterclockwise direction.

Open pit (in Austria and Switzerland Surface Mining ) is a generic term used in mining . It describes the extraction of mineral resources near the surface , in contrast to the mining in shafts and / or tunnels . In addition to the technology, the system or the location of an open pit mine where the technology is used, such as B. Hambach opencast mine . Depending on the type of occurrence, there are more specific names such as sand pit , gravel pit , clay pit or quarry .

A special form of opencast mining is the mountain top removal mining practiced in the American Appalachians , in which mountain tops are first blasted and removed and then the raw materials are mined in opencast mines .

The extraction of stone in opencast mining can be traced back to the Stone Age ( menhirs ).

As opencast mining technology, all technical measures and means for the extraction of z. B. ores , hard coal , lignite , gravels , sands and solid rocks understood. Lignite, gravel and sand are extracted dry or wet by dredging, solid rock is blasted out of the deposit or sawn out. The extraction takes place through the combination of different opencast mining equipment . It is divided into continuous and discontinuous extraction.

Multi-vessel excavators are used for continuous extraction. These include bucket chain and bucket wheel excavators . In Germany, two device combinations have prevailed. The bucket wheel excavator / spreader combination and the overburden conveyor bridge association . In international mining there are also devices that extract the valuable mineral through milling ( Continuous Surface Miner ) and large boreholes ( Auger miner ). The continuous recovery requires an equally continuous promotion . Today this is mainly done with conveyor systems adapted to the conveying capacity of the extraction equipment. Transport by bench track , as was still partly customary until the end of the 20th century, is rarely found today. In Germany, the Cottbus-Nord open- cast lignite mine was last operated with this system.

Single-vessel excavators, wheel loaders and flat excavators are used for discontinuous extraction . Among the Eingefäßbaggern hydraulic excavators, rope excavators and include draglines ( English Dragline ). Among flat excavators are dozers ( dozer ) Scraper and scrapers crawler understood. Large-scale devices with a high conveying capacity are used internationally. In Germany, these devices tend to be in the medium to lower size range. As transport unit have heavy vehicles (SKW) and dumpers established. These vehicles are differentiated according to their weight. Up to a total weight of around 60 t one speaks of dumpers, above that of SKW. The largest SKW in the world is the BelAZ-75710 with a total weight of 810 t and a payload of 450 t .

The transport route for solid materials always ends at a primary crusher . This crushes the material obtained to a grain size that can be used for the following processes. The size of the SKW and dumpers is adapted to the loaders hydraulic excavators, rope excavators and wheel loaders.

Panoramic photo of the Rhenish opencast mine Garzweiler with various bucket wheel excavators in action and the power plants Frimmersdorf (left), Neurath (center) and Niederaußem (right) in the background 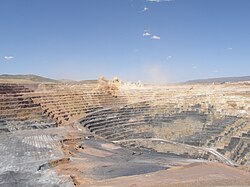 Rössing mine in Namibia , largest uranium mine in the world (2009) 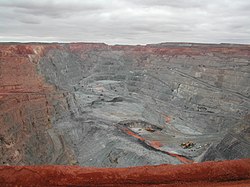 Because of the space required and the effects on the landscape and groundwater, setting up open-cast mines was and is often controversial. Whole localities are sometimes relocated to operate an opencast mine - see also: List of excavated localities .

With an opencast mine, especially if it has been in operation over a large area for many years, a drastic change in the landscape is initially associated, as the layers of earth above the raw material to be extracted, the overburden , are also removed. This often causes a massive lowering of the groundwater , which also affects the surrounding landscapes. The lowering of the groundwater level can lead to subsidence of the ground in adjacent regions, which can cause damage to buildings (" mountain damage "). The pumped-out groundwater is mostly discharged into the surrounding rivers or seeped away to maintain wetlands near the mine. A not inconsiderable part of the raised groundwater is used in open-cast mining for immission control purposes and as extinguishing and service water .

In 2017, the newly added land use by opencast mines in Germany was 2763 ha or around 7.5 ha per day. Of this land use, 4.2 ha were accounted for by the mining of construction minerals, 2.1 ha for open-cast lignite mining, 1 ha for peat mining and 0.3 ha for the extraction of industrial minerals .

Opencast mines are also relevant for air pollution control . The airborne dusts that are released as diffuse emissions by mining activities, internal traffic and wind erosion are of particular importance . For example, increased PM 10 concentrations were found in the vicinity of the open- cast lignite mine in the Rhenish lignite mining area . In addition, combustion exhaust gases from internal works traffic and machines operated by internal combustion engines should not be neglected.

During the open-cast mining operation, the overburden that arises is usually used for backfilling on the dump side of the hole that has been created.

After the dismantling is complete, the landscape is usually recultivated : agricultural and forestry areas and / or local recreation areas are created. Recultivated opencast mines often result in "second-hand biotopes", new lake landscapes and recreational areas. Examples are the Geiseltalsee near Merseburg, the Senftenberger See , the Leipziger Neuseenland , the Borkener Seenland in Northern Hesse, the Blausteinsee near Eschweiler and the Sophienhöhe near Jülich as well as the Oberpfälzer Seenland .