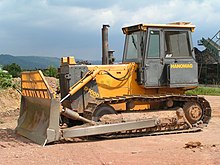 A bulldozer , also a push crawler , bulldozer , chain scraper is a flat excavator that is used for loosening or transporting as well as for laying soil. Bulldozers are tracked vehicles ; Graders with a wheeled chassis are wheel graders.

historical chain tractor, Holt from before 1925

Bulldozers emerged in the United States between the world wars. The origins were heavy tractors, caterpillar tractors that were equipped with a clearing blade .

Bulldozers have a steel shield on the front that they can use to push the ground. Bulldozers can be equipped with various accessories, e.g. B. Rippers (single, multiple), with which the ground behind the bulldozer can be torn up and loosened. Rippers are also used in quarries. There are also winches, plows and laser control systems that can be used for automatic leveling , i.e. H. the blade control is carried out automatically. There are GPS controls to control the installation of the material in large renovation or construction projects.

Dozer blades are available in the following main designs:

Smaller caterpillars have a so-called 6-way shield, which can be adjusted in three levels.

In mountain resorts are snow cats (also snow cats or PistenBully ) standard, which typically have a very low center of gravity and a very large contact surface. You can negotiate steep slopes easily. Your job is to level snow and prepare it for skiing.

Bulldozers are also used in agricultural operations. The tasks here are limited to earthworks and bogging down maize silos . Their high weight and large shields are particularly advantageous.

The Israeli armed forces use armored bulldozers for pioneering work . Rome plow was the name of a bulldozer used by the US military during the Vietnam War.