In some armies (as in the Swiss Army ), the engineering corps, after it earlier related word as Engineer Corps (of Latin Genius ) or as a Corps of Engineers referred. The historical sappers , from the French for 'stone masons', were siege pioneers and were used to build fortifications; the miners, on the other hand, laying mines and mine tunnels in the fortress battle. In the German army , the pioneer troop is a separate branch .

Origin and emergence of the pioneers / word origin

Artisanal soldiers were already specializing in the Roman army. The first pioneers according to today's understanding were trained and deployed as Schanzbauer in France around 1500. In the Prussian army, the term appears for the first time in the "Regiment Pionniers". The regiment was set up on January 8, 1742 by royal orders by General von Walrawe , the fortress builder of King Frederick the Great .

The current term "pioneer" was first used in 1810. At the suggestion of General Scharnhorst , the already existing mining and pontooning companies were merged into a pioneer corps. As part of the rapid technical progress, the pioneering device was continuously modernized from now on. At the same time there was a continuous increase in the number of personnel in the pioneering group. 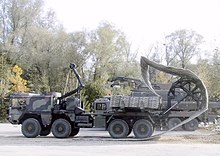 According to the different abilities of the pioneer troops, the pioneers are further subdivided into bridge pioneers, landing translation pioneers, blocking pioneers and tank pioneers . Furthermore, up to the time of the Cold War there were special associations such as the railway pioneers for the restoration and commissioning of railway systems as well as in the territorial army in Germany the Wallmeister for the establishment and triggering of prepared bridges and permanent roadblocks in West Germany. These continue to exist after the end of the Cold War, some with a new assignment and giving up independence.

Pioneers of the armed forces in bridge building

The express bridge after completion

The combat support troops of the pioneers inhibit and direct enemy forces by laying their own and clearing enemy mine barriers in order to encourage movements of their own troops and hinder those of the enemy.

Tank pioneers (combat engineers) blow up traffic infrastructures such as bridges and narrow streets in order to direct and channel the enemy advance , to hinder supplies and to render roads unusable as marching routes. With their equipment they support the development of positions and the defense by creating wire barriers, mine barriers, throwing and laying mine barriers, in order to block spaces, especially in flanks. Tank pioneers are fully mechanized or armored and therefore capable of providing pioneering support to the brigade's infantry in direct fire fighting. In addition to inhibiting enemy movement, the second focus of the tank pioneers is increasing the freedom of movement of their own troops, for example with an armored rapid bridge device or mine clearance tanks .

Pioneers such as tank pioneers but without a direct combat mission and mostly with non-armored group vehicles (e.g. MAN mil Gl 5/7/10 to) as well as unarmored earth moving vehicles and construction machinery.

Bridge building pioneers build traffic structures over water for their own troops. In addition, pioneers are able to carry out general construction work as well asto set up and operate the water supply and infrastructure in a field camp. The water treatment, however, was the task of the NBC defense force .

Land translation pioneers - this designation existed in the National People's Army (NVA) until 1985; their main task was to translate armored spearheads and to create bridgeheads on the opposing bank. This should be achieved by translating on rivers and water hazards with translation technology (amphibious vehicles). Motorized buoyant tracked vehicles ( PTS , PTS-M , GSP and K61 ) transport infantry with technology and tanks, supported by rockets, artillery and flak fire. The infantry then creates the conditions on the opposing bank for the deployment and construction of pontoon bridges over the water hazard for the subsequent troop transfer. Within seven days, the 5th Army in forward defense should have reached the German-Dutch border; various water hazards would have been forced here. After 1985 a defensive strategy followed.

Landing translation pioneers also bring the rearguard when the mobile bridges are dismantled. When these forces were called NVA country ferrying companies (Luek) and a Pionierbataillion were subordinated.

Due to the special tasks, the LüK was mainly set up with NCOs; they had driver and helmsman training for buoyant tracked vehicles. Demolition service, mine laying and clearance skills as well as close-range fighting were trained. The engineer battalion was assigned to a tank division or regiment. In the northern Military Area V be created in November 1973 in Havelberg at the mouth of Havel in the same the landing and ferrying battalion (lüb-5). In 1981 the battalion joined the Ponton Regiment 5 stationed at the same location.

Railway construction pioneers are needed to maintain railway lines and their infrastructure. They were trained and stationed with the NVA in Doberlug-Kirchhain. Many track builders and train drivers did their reservists there.

Air force pioneers are air force personnel for runway repair . Flight operations areas are repaired after an attack and building repair measures are carried out.

Pioneers are various vehicles such as armored engineer vehicle , armored vehicle launched bridges , mine clearing and mine laying vehicles such as the mine-launching system Scorpio equipped, and have diverse entrenching tools .

Pioneers in the early modern army

In the armies of the 18th century, miners were used to lay mines under fortification walls and the sappers to build field positions. Pontoniers were used to build bridges to cross bodies of water. In some armies, especially in Switzerland, these types of weapons were grouped into engineering or genius troops, which consisted of craftsmen and Schanz workers ('Schanzbauern'). The engineering corps was the combination of the trained engineers in an army.

In the First World War, the importance of the engineering corps rose through the trench warfare particularly on the Western Front but also in mountain warfare sharply. The construction of shelters , trenches , bunkers , saps and fortified and protected positions by originally sappers and tunnels by miners required special knowledge and skills in order to support the infantry or artillery.

New weapons, such as mine throwers and flamethrowers , and at first the hand grenades that were increasingly used in trench warfare, were also used by pioneers. For this purpose, special formations were set up, such as mine throwing companies, searchlight trains, pioneer parks and railway pioneers. In the event of attacks, pioneers accompanied the storm troops in order to shut down the fortifications of enemy lines as quickly and effectively as possible or to create transitions over natural obstacles such as rivers.

With the advent of shock troop tactics, pioneers were used to set up the first assault battalions . From these emerged the storm pioneers in World War II.

Use in World War II

The pioneer troop was considered a branch of the fighting force of the Wehrmacht . During the Second World War , its importance within the Wehrmacht increased due to motorization and blitzkrieg strategy .

Pioneers in the Bundeswehr

Activity badge of the pioneer troop

Air force pioneers are tasked with repairing or building runways. You are part of the → Air Force Object Protection Regiment .

The navy had previously set up its own pioneer forces and belonged to the navy's amphibious group . The task was to create the structural requirements for landing operations.

For historical reasons, the Swiss Army only calls the soldiers of the transmission troops pioneers. The transmission arose from the engineering troops (construction of telegraph lines) and was formally assigned to them until 1951. Then a separate department was created in the administration and in 1978 the Federal Office for Transmission Forces, which then became today's base of command and support in the course of further army reforms. However, the name of the soldiers as pioneers has remained.

The infantry within the Bundeswehr (hunters, tank grenadiers and air force security units) is able to do this in the course of the "pioneer training of all troops"

The infantry cannot cross bodies of water independently by means of assault boats , this results from the lack of STAN structures in the Bundeswehr, the infantry is therefore dependent on pioneer support. The last motorized translation device " TPZ Fuchs " has now been replaced by the non-buoyant GTK Boxer .

To a limited extent, all types of troops are trained in the pioneer service of all troops, but in contrast to infantry, they are only able to do so to a limited extent due to the heavy equipment. In particular, the mechanized combat troops and the logistics troops require permanent support from the pioneer troops for their own movements, especially when crossing the water and when the transport infrastructure is damaged.

Arms in the Austrian Armed Forces