A branch of service or type of weapon (including in the armed forces , the NVA and the Austrian Federal Army ) is the totality of all military forces within an armed force , armed force or military organization area have comparable skills, equipment and training and jobs.

The functional division of modern armies with reference to the type of service has largely superseded the classification according to the type of weapon , although in German-speaking countries, especially in the Austrian Armed Forces , the designation weapon type is still sometimes preferred, but is mostly meant completely synonymously . Actually, the branch of service groups troops in terms of their armament and equipment.

A military group is the combination of several military branches, e.g. B. to combat troops or combat support troops . The division of a modern army according to functional aspects does not correspond to the actual subordinate relationship . The formations and units, which are predominantly composed of one type of troop, are given similar names based on this: formations of the armored troops, for example, as a tank battalion, tank brigade, tank regiment, etc. 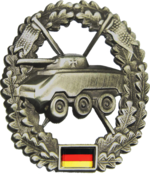 Under branches of service refers to the German Army and partly in the Joint Support the division into the same according to their abilities and their equipment various units and formations.

With the transfer of some army forces to the armed forces base, u. a. entire branches of the armed forces, the armed forces base for these former army troops (army uniform wearers) has also taken over the division according to military types. The same applies to the central medical service , but the former army troops in this area are almost exclusively members of the medical service . All army uniform wearers are externally recognizable by a combination of weapon color (cf. weapon type), beret color , beret badge and, if applicable , the badge of activity .

In the history of the Bundeswehr , the branches of service have often been renamed, reclassified, renamed, newly created or even completely dissolved. In addition to the official division of the troop type, there are often unofficial troop types based on the classification of the former troop types, which group forces according to their function. Examples are tank scouts or long-distance scouts , which officially no longer represent a separate service category.

In the Air Force and the Navy, there are no branches of service, but service areas (e.g. aviation service) or application series (e.g. application series 76, naval security service ), which, however, are also classified according to functional aspects.

According to Art. 7 of the Ordinance of the Federal Assembly on the Organization of the Armed Forces are “elements of the armed forces for whose training recruit schools are held. There are no recruiting schools for the service branches ”.

Military branches / branches of service in the Anglo-American language area

In many Anglo-American armed forces, the branches of the individual armed forces are called branches (of service) or branch .

In the United Kingdom, the term Corps of ... is used for this. So z. B. in the British Army the Royal Artillery , the Royal Engineers or the Royal Signs .

Military branches of the NVA

Weapon class (in the sense of military class ) was the collective name for troops or forces of the armed forces (TSK) of the National People's Army of the GDR , as well as the armed forces of the former Warsaw Pact states with their own typical armament and equipment for carrying out or participating in combat or Acts of combat. The branches of service were the main component of the TSK concerned and were divided into formations , units and units . The special troops, forces and services of all TSK were entrusted with their support and security . The following classification applied.

Arms of the Wehrmacht

With the order of the High Command of the Wehrmacht on October 14, 1942, the following division of weapons was applied to the field army :

In most modern armies, the following historical troop types are no longer known. Exceptions are, for example, railway pioneers (Italy) . Many generic terms such as infantry or artillery are still quite common. In addition, the classification is "mixed", both according to branches of service and branches of service.

Military branches in the German army

Arms in the Austrian Armed Forces

Military branches in the Swiss Army