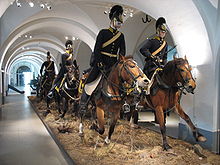 Gun drawn by six horses from the front

When Mounted Artillery the equipped with smaller guns were artillery designated whose gunners for better mobility in battle (faster change of position ) and on the march on horses rode. In the German Army , the mounted artillery and the mobile artillery formed the field artillery . In Austria it was called "Driving Artillery".

Originally, the gun crews marched alongside them on foot. At the beginning of the 18th century, the first units of the mounted artillery , then still called Compagnie , were set up. Compared to the then normal artillery in a four-horse train , their guns were mostly driven by horses in a six-horse train and thus had more tractive power. To keep the horses in (dismounted) use, two horse owners were also required (see tension ). A total of 14 horses were required per gun (without associated wagons, such as ammunition wagons, etc.), 8 of which were riding horses, which should also be permanently available due to the riding training of the gunners and horse keepers. Because of the considerably higher operating costs , only a few units could be made mounted.

When, in the middle of the 19th century, most of the field artillery also became more mobile due to the crews riding on mounts and limbs (moving artillery), the mounted artillery continued to maintain its advantage over the rest of the artillery . Since no one was sitting on the vehicles, their weight was lower and no one could fall off when the vehicle was bumpy or fast. In contrast to the mobile artillery, it could therefore also be used in difficult terrain and change position more quickly. It was for these reasons the cavalry associations or the so-called artillery reserve allocated.

In addition to handling the gun, the gunners of the mounted artillery were also trained in riding. They were armed with cavalry sabers and their uniforms matched those of the cavalry. So they didn't wear a tassel on their sabers , but a thong .

While the Reichswehr was still in three artillery regiments , there was an additional mounted battery for each of the three cavalry divisions . At that time, however, there was no longer any distinction between foot artillery and motorized artillery.

One of the last mounted artillery units for ceremonial occasions is the King's Troop, Royal Horse Artillery of the British Army , which parades along with other ceremonial units for state occasions.