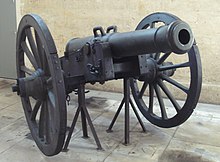 French 12 pounder field cannon from 1793, a muzzle loader with a bronze barrel

Cannon at the Frundsbergfest in Mindelheim (2009)

Cannon is originally the name for a gun that is used both in artillery (terrestrial artillery , ship artillery , anti-aircraft artillery ) and for aircraft (on- board cannon also machine cannon) and tank armament ( combat vehicle cannon or tank cannon ). The tube length is at least twenty times the caliber ( caliber length L ). In the military system of the former Warsaw Pact, the cannon of the earth artillery was defined as a flat fire gun with a barrel elevation of up to + 40 ° and a barrel length of over 30 to 70 calibers.

Colloquially, no distinction is made between the terms gun and cannon , although gun is a generic term that includes cannons as well as mortars and howitzers .

The term comes from the Italian word canna (like French canon ) for "tube" or "pipe", which is expanded to cannone with an augmentative ending . The underlying Latin word canna is itself a takeover from the Greek, where κάννα (kanna) means pipe . Guns have been around under various names in the German-speaking world since the 14th century . The term cannon did not become common in German until the 17th century. A distinction between the cannon, howitzer and mortar types can be proven in the late 18th century.

In the early days, the type of ammunition used and the caliber length were the main distinguishing criteria. Cannons fired solid shot at close range and grapeshot in direct income. The howitzers, invented in 1683, fired bullet grenades with time fuses in direct and light archery fire, and mortars fired those in steep fire. Howitzers and mortars used to be referred to as chamber pieces, as the rear end of the tube core, the powder chamber, was reduced in diameter. Chamber guns have a two-part barrel.

Modern cannons are flat-fire guns with an elevation possibility of up to about 35 °. Since they give the projectile a straight trajectory due to the high muzzle velocity, they can be used for indirect fire and direct shot. In contrast to this, howitzers (elevation up to 75 °) and mortars are used as high- angle fire guns for indirect fire , with howitzers also allowing direct fire for close-range defense.

The anti-tank guns were replaced by the lighter and more mobile anti-tank guided weapons because of their ineffectiveness compared to the modern armor .

The term cannon is still used today for the main weapon (also combat vehicle cannon ) of battle tanks , the anti-aircraft cannon or smaller automatic cannons . In military technology , the term is also used for lasers and electromagnetic cannons such as railgun and coilgun used as weapons .

The term cannon is associated with idioms and metaphors such as cannon fodder or sports cannon .