from Wikipedia, the free encyclopedia
This is the spotted version , flagged on August 20, 2020 . There are 3 pending changes that have yet to be viewed. 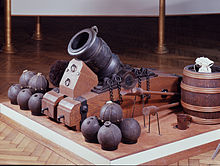 The term mortar refers to a high-speed gun with a short barrel. In contrast to howitzers , use in flat fire is usually not intended. Mortars are often part of the equipment of units of the combat troops, but are also used in part by artillery and navy . In the German-speaking area, the terms mine throwers (Germany until 1918; Switzerland until today) and grenade launchers (Germany until 1945/1990; Austria until today) are also common.

Mortars differ greatly in their technical structure. What they have in common is that they are downright high-speed weapons. Often it is not possible to shoot with a tube elevation of less than 45 ° above the horizontal. The advantage of steep fire is to be able to hit targets behind cover and thus protected from flat fire. Steep fire can hit the upper side of covered targets, such as forts, shelters or the upper deck of a ship, which is often less protected and easier to hit. Due to the steep angle of fire, mortars can shoot out from behind cover that would block fire from flat-track guns. You are also better protected against enemy fire. In this way, during the fortress war, mortars could shoot out of a depression or a sap that could not be hit with the flat fire of the fortress guns. Conversely, it was also necessary for the defender to use mortars. Another advantage of the almost vertical angle of impact is a significantly more efficient distribution of the shell fragments, since the majority of the fragments of an HE grenade are blasted off approximately at right angles to the projectile trajectory.

Older mortars were primarily weapons of fortress warfare. Their task was to shoot an enemy fortification ready to attack. "Light" mortars fought enemy soldiers and drove them out of certain defensive positions with their fire. Conversely, the defender used them to fight fire positions and accumulations of the attacker in the immediate vicinity. "Heavy" mortars were supposed to destroy fortifications, coverings and obstacles. Mortars were part of the fortress or foot artillery, sometimes also of the pioneer troops. In peacetime they were usually stored in arsenals. At the beginning of the war, they were given to units that had previously been cadreed. The horses to be drawn had to be requisitioned first. This made the siege trains cumbersome and unsuitable for field warfare. At the beginning of the First World War, only the German Army had modern, fully operational heavy and heaviest artillery and modern light high-angle weapons for both siege and field warfare.

Mortars in the modern sense are support weapons belonging to combat units for every type of combat. The simple mortar is called the infantryman's artillery. They complement the fire against targets that can not be fought by flat guns. They supplement the fire of the artillery when it cannot take effect quickly enough, when their fire would endanger their own troops or against targets of low priority. When attacking, mortars are primarily effective against heavy weapons of the defender, which are supposed to hold them down or destroy them. In defense, they work against deployments and dead spaces in advance as well as against intruders in preparation for counter-attacks. In addition to HE shells, they also fire smoke and light grenades and other special projectiles. The firing position of mortars is as close as possible to the front line, as their range is limited. At the beginning of the Second World War , this meant that individual medium mortars followed the preceding infantry unit from cover to cover. The infantry themselves had light mortars that were part of their order of action. The firing position and the observation post were often close together. Only in the course of the war did a stronger concentration of high-angle weapons prevail. The fire control approached thereby the more complex procedure of the artillery. This trend has continued to this day with the increasing introduction of heavy mortars and modern fire control equipment. Because of their ease of use, light weight, and general availability, mortars have also become the preferred weapons of irregular forces and are part of the typical spectrum of asymmetric threats.

Modern mortars are divided according to their weight:

The first use of mortars occurred in the late Middle Ages during the conquest of Constantinople (1453) . In the case of the mortar types of that time, the barrel length was about three times the caliber diameter . Earlier than other types of guns, mortars were used to fire high explosive projectiles. In the case of the light mortars, the tube and foot were often cast together in one piece. Such pieces were called "stool or foot mortars". Carriages for mortars were available as wall mounts and as stable block mounts or “loops”. The hook mortar is one of the smallest mortars . The developed forms of this weapon include the Coehoorn mortars developed at the end of the 17th century , which were still used in the American Civil War and in some cases even in the trench warfare of the First World War . 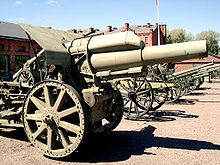 With the introduction of rifled breech-loading guns, the range of the fortress artillery increased. Therefore the range of the siege guns had to be increased. The pipes of mortars of this time were therefore usually longer. The guns were therefore typologically rather heavy howitzers and were also referred to as such outside of the German-speaking area. The German 21 cm mortar from 1910 with a barrel length of 12 calibers is characteristic of this genus . It was followed by the long mortar with 14.5 calibers, which was replaced in the Wehrmacht by the 21 cm mortar 18 with a barrel length of even 31 calibres. These guns were no longer intended exclusively for fortress warfare. As fortifications were increasingly protected, heavier projectiles were increasingly necessary to penetrate armor and thick concrete ceilings. This led to over-heavy weapons, such as the 42 cm caliber mortar, usually referred to as Big Bertha , and the 60 cm caliber mortar Karl . Even before the First World War, the German Reich was the leader in terms of both quality and quantity when it came to equipping it with high-angle weapons and retained this top position, at least in technical terms, until World War II. The development of the Luftwaffe and the decreasing importance of fixed places for warfare increasingly called into question the military added value, especially of the super-heavy mortars.

Mortar for combat support (from the 19th century)

In addition to the heavy mortars, there were also lighter deep-fire guns for infantry support in the fortress war in the 19th century. Usually they were old mortars from the arsenals or improvised guns. It was not until the beginning of the 20th century that technically modern and powerful weapon systems were put into service in the form of the German mine throwers ( light mine throwers 7.58 cm ). The decisive factors were the experiences of the Russo-Japanese War and the tactical tasks that awaited the German Army with their strong fortifications in the course of a war against France and Belgium. They were used by the pioneer troops and were intended for the fortress war. During World War also showed their suitability for trench warfare . This form of combat led to an unprecedented need for support weapons for the infantry, not least because the artillery often proved unable to adequately support its own infantry. As a result, armies of the Entente also initially provided improvised means of fire with a wide variety of technical characteristics on a large scale. These included, in addition to compressed air and wing mine launchers and weapons with a shooting stick, the Stokes mortar designed in 1915 . Its structure is still the basis for the majority of the support weapons known as mortars.

In a modification of this principle, propellant gases are diverted in some systems or the length of the firing pin (and thus the effective barrel length) is varied in order to change the firing range. The firing angle is usually determined by a height-adjustable bipod attached to the tube or a comparable frame. With small mortars up to a caliber of 60 mm, the barrel can also be held at the correct angle by hand. The recoil of the grenade is absorbed by a simple base plate on which the barrel is attached. Since a pipe return system and a locking mechanism can be dispensed with, the manufacturing costs are low. Mortars of this type were developed in calibers from 50 to 240 mm, with the heavier types from 160 mm having a simple breech-loading system with a drop-barrel lock, as loading via the muzzle is no longer practical due to the length of the barrel and the weight of the bullet. In addition, they often have simple damping systems that prevent the floor slab from digging too deep.

Firing can take place immediately when the thrown ammunition strikes a solid pin in the barrel with the propellant charge fuse. Some mortars also have a manual trigger or a pull cord for larger calibers. In the case of smooth barrel weapons, the ammunition is sealed against the barrel with a labyrinth seal , which consists of several gas sealing rings that surround the projectile. However, this type of seal is significantly worse than with a breech-loading gun and some of the propellant gases escape between the barrel and the projectile. In a mortar with pulls, there is a baffle plate at the bottom of the ammunition, which is squeezed outwards by the propellant gases and thus both seals and adjusts to the pulls and thus creates the twist.

After the Stokes mortar was refined in the 1920s by the French company Brandt, such weapons spread rapidly and - some imported, some with slight modifications - became a standard weapon for the infantry. The reason for this was not least the extremely low price. The Wehrmacht introduced them in the 1930s instead of the old mine throwers from the First World War. 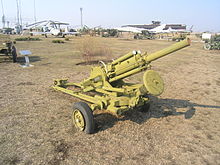 The technical basis of mortars has hardly changed for over a century. Improvements have been made primarily through the development of ammunition and fire control systems. On the other hand, there are developments that sometimes radically deviate from the principle of the Stokes mortar. In the last few decades, several manufacturers have developed breech loading mortars, often with an automated feeder. At the price of considerably increased weight and higher technical complexity, they offer increased firepower and, as a rule, the possibility of flat-track shooting. In addition, rifled barrel mortars with increased range are being introduced with increasing frequency. Systems with a closed combustion chamber (FLY-K principle) are available for light mortars, which have a significantly weaker firing bang and glow. In contrast, multiple launchers such as the Belgian PRB 426 have not proven themselves in land warfare, but the Hedgehog - "mortar" used by the British Navy in World War II for anti -submarine defense.