This article or section needs to be revised. More details should be given on the discussion: percussion cap from Ｔｏｍ ( discussion ) 15:38, Oct. 6, 2019 (CEST). Please help to improve it , and then remove this flag. 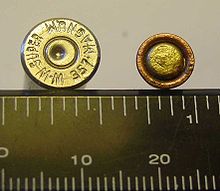 Two percussion caps on the
left: for handguns , fired and pressed into a .357 Magnum . Right: for shotgun ammunition . 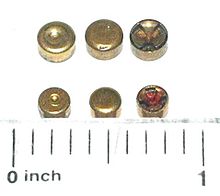 A fired (left) and intact (right) percussion cap in the bottom of a cartridge case caliber 5.56 × 45 mm NATO 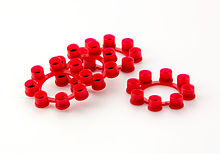 Primer (often simply primer , primer or igniter ( Engl. Cap percussion or primer called)) are used to ignite the gunpowder , so the propellant charge of the cartridge ammunition and cartridges of ammunition , or other powder charges. Percussion caps are also used to ignite non-electric detonators . The percussion cap was invented around 1818. For the next 60 years it became the means of choice for detonating a powder charge in a muzzle loader . For this purpose, the flintlock was developed into a percussion lock . The invention of the primer was a milestone on the way to the development of modern center fire cartridges .

All modern weapons use centerfire ignition, with a primer pressed into the bottom of the cartridge case. Exceptions are weapons for small caliber cartridges such as .22 lfB , where rimfire ignition is used.

The Scottish clergyman Alexander John Forsyth came up with the idea at the beginning of the 19th century to use impact-sensitive substances such as fumed mercury or potassium chlorate to ignite the propellant. Various inventors tried to use this new approach practically to replace the previous unreliable flintlock. The idea for the primer cap was also claimed by some people in different countries. Since there was no international patent law at the time, it is not possible to say with certainty who was the first. The same idea can also have arisen at about the same time. On the one hand there is the Englishman Joshua Shaw who emigrated to the USA and claimed this for 1814. Shaw registered a patent for a reusable steel tube that could be filled with the impact-sensitive substance. Since Shaw lived too short in the United States, he was not granted the patent. Since the patent office burned down years later, there are no documents to support Shaw's claim. In 1815 he is said to have experimented with a disposable primer made of pewter and a year later finally made of copper . Shaw did not receive an official patent until 1822. The invention of the copper primer by the London gunsmith Joseph Egg , which is dated to 1818, is better documented . The company Sellier & Bellot, founded in Prague in 1825, played a major role in improving and disseminating the percussion cap .

In civilian weapons, the percussion caps caught on very quickly; from the mid-1820s they were widespread. The military initially had reservations about parting with the tried and tested flintlock weapons. The military began testing the new system in the 1830s, and by the mid-1840s it was also militarily established in Europe and the United States. Often flintlock weapons were switched to percussion ignition. Even if the first pioneering breech-loading weapons with standard cartridges (e.g. Dreyse needle gun ) were available from the 1840s , primers for muzzle-loading weapons were predominant for the next few decades. The high point in the production of percussion caps for percussion weapons was in the mid-1860s, after which they were increasingly replaced by primers for modern breech-loading weapons integrated into center fire cartridges.

These primers consist of a - usually nickel-plated - brass capsule in which the primer is located. This is protected against moisture by a paper disk coated with lacquer. The three-legged anvil is also used as an abutment on the boxer primer.

External primers are placed on the piston ; this is considered an anvil and passes the pilot flame on to the propellant charge.

While with the boxer ignition the pilot jet is directed through a central ignition hole in the sleeve into the powder chamber, the anvil is attached to the Berdan sleeve at this point. Next to the anvil are the ignition channels. Berdan ignition is still mainly used in the military sector, while boxer ignition dominates in the sporting sector, as the fired primer can easily be ejected in order to reload the cartridge. Shotgun primers are longer than the flat brass capsules described above; The primer, anvil and ignition hole are integrated in its casing.

All primers are ignited by friction when the firing pin of a weapon hits the primer and the material squeezes against and past the anvil. Depending on the substance, even a very small amount of vibration or exposure to heat is sufficient to cause an ignition, which is why manipulating primers or cartridges is life-threatening.

Since around 1930, a mixture of tetrazene and lead trinitroresorcinate (" Sinoxid sentences") has been used as an initial explosive in perchers . These and related mixtures have completely displaced the previously common, very toxic and corrosive fulminate mercury (mercury fulminate). The lead azide detonates immediately and can only be used as a primer for other explosives and not in primers. The also very poisonous silver fulminate ( silver fulminate ) is too sensitive and too expensive for this use.

Boxer primers are available in sizes 4.45 mm (small) and 5.33 mm (large). If the dimensions are the same, a distinction is made between pistol and rifle versions and a Magnum version with a reinforced primer. Berdanz primer caps are available for pistols with a diameter of 4.5 mm and 5 mm and for rifles with a diameter of 4.5 mm, 5.5 mm and 6.45 mm. As a rule, primers do not have an identification of their size or charge.

So-called snap peas work according to the same principle as percussion caps . These are small bangers that z. B. are filled with a small amount of silver fulminate. If you throw them on the floor, the impact ignites the fabric and there is a more or less loud bang.

All substances mentioned are highly explosive and fall under the Explosives Act or the ordinances based on it (SprengV).

When firing, the reaction products of the initial explosives can be released. In the past, the unhealthy fatal mercury and lead trinitroresorcinate mixtures were used. Diazodinitrophenol (DDNP), on the other hand, contains neither lead nor mercury.