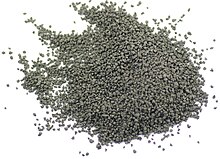 Black powder was the first known propellant for firearms and solid rocket rockets and is still used today. Wet-fire powder was a further development for use in muzzle-loading weapons. Nitrocellulose powder , which, in contrast to the previously used black powder, consists of so-called low-smoke cellulose nitrate powders , is widespread today. Instead of the term “gunpowder”, which was historically derived from black powder, the term propellant powder is also used today. These include, along with the initiating explosives , explosives , gunpowder detonators and pyrotechnics to explosives .

Black powder is the oldest known gunpowder and propellant.