The title of this article is ambiguous. Further meanings are listed under explosives (disambiguation) . 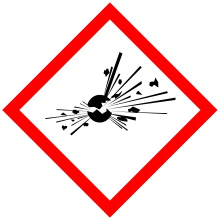 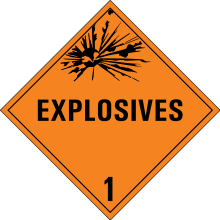 An explosive or explosive is a chemical compound or a mixture of chemical compounds which react very quickly under certain conditions and can release a relatively large amount of energy in the form of a pressure wave (often with heat generation) ( detonation ). The speed at which the reaction spreads within the explosive is above the internal speed of sound . A substance that can detonate is called explosive , which in particular includes means of ignition .

The explosives belong together with the initial explosives , propellants and shooting materials ( black powder and gunpowder or propellant charge powder), detonating agents and pyrotechnic products to the explosive substances ( explosives ).

Explosives are based on high-energy compounds. These are partly organic compounds, which contain atoms of the elements carbon (C), hydrogen (H), nitrogen (N) and oxygen (O) and are thermodynamically unstable, or strong oxidizing agents in combination with reducible substances, for example a mixture of inorganic chlorates with organic substances, metals, carbon powder or sulfur . Typically, most organic explosives have nitro groups . The explosion creates very stable, gaseous compounds such as carbon dioxide CO 2 , water vapor and nitrogen N 2 . During this conversion, a large amount of heat is released within a few microseconds or milliseconds, and the reaction products that arise during the conversion of the explosives are also gaseous because of the heat of several thousand degrees Celsius. The sudden formation of very hot gases with a large space requirement, from a solid or a liquid, then results in the pressure wave typical of explosives . The explosive effect is drastically increased by the high temperature of the gases, because the more heat the explosive releases during detonation, the higher the gas pressure. As high a temperature as possible thus contributes to the greater explosive effect. However, the pressure also depends on other factors.

Both civil and military explosives sometimes still contain metals such as aluminum or zinc . While finely powdered aluminum increases the gas impact effect through higher temperatures , aluminum or zinc grit in anti-aircraft ammunition is used to increase the fire effect in the target.

Detonators are used to initiate explosives . There are electrical, non-electrical, and electronic ignition systems. In addition, detonators are occasionally used, which are ignited with a safety fuse. If the main charge consists of a very insensitive explosive, an additional boosting charge (booster, impact amplifier ) is required between the detonator and the main charge .

The first explosive - black powder - was made very early in human history because all of the components ( potash nitrate , sulfur and charcoal ) are readily available. The "Liber Ignium" (the book of fire ) by Marcus Graecus from the 11th century, with surviving copies from the beginning of the 13th century, still contains several recipe variants. But it was not until the second half of the 14th century that it was increasingly used, mainly in firearms and as an explosive.

The first synthetic explosives were nitroglycerin , discovered by Ascanio Sobrero in Turin in 1847 , and cellulose nitrate ( nitrocellulose or gun cotton ) in 1846 . Since glycerol trinitrate is very sensitive to vibrations and insufficiently neutralized cellulose nitrate tends to self-ignite, the cause of which was initially not recognized, handling was very dangerous. In 1862 Alfred Nobel invented the initial spark and in 1867 he succeeded in producing dynamite in Krümmel near Geesthacht by absorbing glycerol trinitrate in kieselguhr . In 1875, Nobel found blasting gelatin, the strongest commercial explosive at the time, by gelatinizing the liquid glycerol trinitrate with 6 to 8% solid cellulose nitrate. Since the blasting gelatine was still quite sensitive to impact and was expensive, so-called gelatinous explosives were developed by adding wood flour and nitrates . They are safe to handle and sensitive to detonators. In the meantime they are being displaced by ammonium nitrate explosives , especially in the field of extraction blasting .

Picric acid and m-trinitro-cresol, whose raw materials were obtained from coal tar, are among the oldest military explosives . However, these had the major disadvantage that they formed shock-sensitive heavy metal picrates on the inner wall of the grenades, which led to gunfire . For this reason, the grenades were painted inside before being filled. When petroleum distillation was able to provide enough toluene, TNT replaced its predecessors as a frequently used, highly safe, explosive military explosive.

Modern high explosives are often based on hexogen , nitropenta or ethylenedinitramine. Octogen is one of the most explosive explosives, but it is complex and very expensive to manufacture. It is used almost exclusively for special charges , for example shaped charges , when very high explosiveness is required.

The specific vapor volume is the volume of gas in liters that would result from the complete conversion of 1 kg of explosive under normal conditions .

With the amount of substance of the gaseous detonation products (vapor) per gram of explosive (in mol / g) the specific vapor volume (in l / kg) results as follows:

The above formula results in a specific vapor volume or normal gas volume for pure ammonium nitrate of 980 l / kg.

The specific energy is the amount of energy in kilojoules that is released when 1 kg of explosive is completely converted.

According to its unit of measurement MPa l / kg, which is commonly used in practice, it can also be understood numerically as the pressure in megapascals that 1 kg of the explosive in question would generate if it were fully converted in a volume of 1 liter (1 MPa l = 1 kJ). Specific energy, specific vapor volume and explosion temperature are therefore closely related.

Data from some explosives

Characteristics of some selected explosives, as they are usually determined empirically from standardized experiments such as the lead block bulge :

Warning sign on the premises of the Gnaschwitz explosives plant

Civil explosives are mostly used for the extraction of rock in opencast mines ( quarry : basalt , granite , diabase , lime etc.), for the extraction of ashlar and in mining ( hard coal , potash & salt , gypsum , ore mining etc.). They are also used in traffic route construction, tunnel construction, demolition blasting, seismic explosions and pyrotechnics ( fireworks ). The production of commercial explosives in Germany in 2004 was around 65,000 tons. ANC explosives accounted for approx. 36,000 tons, gelatinous explosives based on NG approx. 10,000 tons, and pumped and cartridged emulsion explosives for approx. 16,000 tons. The remaining amount is divided between weather explosives for coal mining and black powder for stone extraction. Leading manufacturers of industrial explosives in Germany are Orica (Troisdorf and Würgendorf), Westspreng (Finnentrop, belongs to Maxam ), Sprengstoffwerk Gnaschwitz (belongs to Maxam) and WASAG AG (Sythen, also Maxam).

Military explosives are used as fillers for grenades , bombs , mines , warheads for missiles and torpedoes , and as components of propellants. A special point is the use in nuclear weapons for the compression of plutonium in order to obtain a critical mass and thus to trigger a chain reaction .

Both military and civil explosives as well as self-made explosives (self-laboratory) are used for terrorist purposes. Examples are the mixture of powdered sugar and a weed killer containing chlorate or mixtures based on ammonium nitrate . Mixing such explosives is very dangerous as it can detonate unpredictably.

The handling, including the production, handling, processing, use, spend (Transport) and handing over within the establishment, the recovery and destruction, the traffic ( trade ) and imports is due to the possible risk in the Explosives Act regulated.

Technically used explosives are usually mixtures of energetic chemical compounds, binders, plasticators and other additives. They are divided into the following groups:

According to DIN 20163, explosives are divided into: 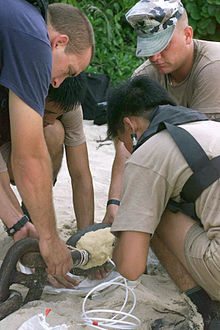 Preparing to detonate an anchor chain with C4 during a U.S. Navy exercise. You can easily see the light, malleable mass of the plastic explosive.

Basic substances in the experimental stage

Wikisource: Law against the criminal and public dangerous use of explosives (German Empire, 1884)  - sources and full texts