This article explains the grenade as ammunition. For another meaning in heraldry, see Grenade (Heraldry) ; for the mineral garnet and gemstones, see garnet group . 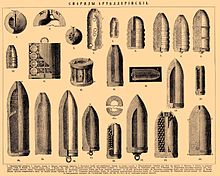 Fig. 1 Artillery shells XIX. Century ( 1 to 24 ) after BROCKHAUS AND EFRON

A grenade is a projectile filled with explosives that can be fired from guns or grenade launchers or thrown by hand ( hand grenade ). Artillery shells are the main weapon of artillery .

The grenade is according to the fruit of the pomegranate tree , the pomegranate . Just as it was called “malum granatum” because of its rich content of kernels ( Latin “granum”), the throwing ball filled with powder grains was given the name “ grenade” . The German-speaking armed forces borrowed the word around 1600 from the Italian granata ; it then became naturalized during the Thirty Years War . The grenades were originally thrown by hand. The name was later transferred to long storeys .

The grenade is usually a hollow body with a combat charge corresponding to the intended combat purpose, which is triggered by a detonator . As an artillery shell, it is fired with a propellant charge ( cartridge ) or with a rocket propellant. The grenades are classified according to their functional characteristics and the caliber of their fire means. Some projectiles without a combat charge (e.g. balancing projectiles ) are often referred to as grenades, although technically they are not, probably because the weapons from which they are fired usually fire grenades. 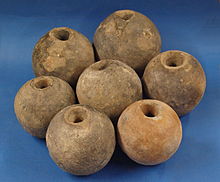 Ceramic grenades from the 17th century from Ingolstadt 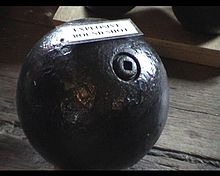 The first hollow artillery projectiles filled with an explosive charge appeared in isolated cases in the 14th century. The development of the grenade began in Europe at the beginning of the 16th century, when hollow projectiles known as bombs appeared alongside the massive stone, ceramic, glass and metal balls . They were filled with black powder and equipped with wooden detonators filled with a slow-burning powder mixture. Several hundred ceramic grenades from the 17th century, which were unearthed during the construction of an underground car park in 1983, have been preserved from the Ingolstadt state fortress . Grenades were first fired by hand, with hand slings or catapults . Metal grenades were later fired from high- speed guns ( howitzers or mortars ). In addition to explosive and incendiary bullets , spherical containers with "hail" (pieces of iron and stones) were used as forerunners of the cartridges . In the 17th century, the term grenade began to be applied to all hollow projectiles of cannons and howitzers , while the projectiles of heavy mortars continued to be called bombs until the 19th century . Before 1700, the grenades were sometimes provided with iron tips in order to adhere to palisades and other wooden structures. From the 17th to the beginning of the 19th century, grenades made of iron and glass were filled in several layers into large pot-like bombs ("garnet hail") and fired as scatter shots from mortars or heavy howitzers . Other types of projectile were glowing balls as well as rod and chain balls. Overall, however , the grenade offered the best possible effect.

Although both had the shape of a sphere, bombs and grenades initially also differed in that the heavy bombs had a uniform wall thickness and also had eyelets with which they could be placed on the propellant charge, while the grenades of the howitzers had a reinforced base opposite the burn hole, which made their trajectory very irregular. Their construction approached when both were then fired with the help of " sabot ". Therefore, the term grenade was later generally restricted to smaller projectiles and only heavier (i.e. larger-caliber) projectiles were classified as bombs.

In the 18th century, column or ring igniters were used instead of the unreliable sponge and fuse igniters. They were provided with a set of powder that was set on fire when fired by the propellant charge and, after a certain time, disintegrated the projectile. An important innovation was the 1803 invented, even garnet Kartätsche called shrapnel .

The shell got its modern shape as a long bullet around 1850 with the transition of the artillery from smooth muzzle-loaders to rifled breech- loaders . Attempts with barrel -shaped grenades , including those with spherical tips and a lead ring that was supposed to close the clearance in the smooth tube, had already taken place since the middle of the 18th century. The long bullet was led through a jacket with several bulges and later through rings made of lead in the tube; It received the necessary stability through the rotation around its longitudinal axis ( twist ). From the mid-1880s, high-quality explosives such as dynamite , picric acid and later also TNT were available to fill the grenade instead of black powder . For the propellant charges came low-smoke powder used, the disabled visibility when shooting less. The ignition was initially by a percussion cap , starting around 1890 by a priming ( detonator ) with detonator . With the new explosives that could fragmentation effect of explosive shells (short: SPGR ) will be greatly improved. It increased even more with the newly designed ring grenades . Compared to the previous lead rings, the copper guide rings ensured tighter bullet guidance even at high muzzle velocity and better stabilization of the grenades overall . Instead of cast iron, cast steel was used as the bullet jacket, which produced sharp-edged splinters. The explosive charge was poured in a molten state into forms made of cardboard, later from zinc sheet, and inserted into the projectile cavity. Against tough targets were first chilled iron grenades used by beating the strong steel or concrete tanks and only then detonated.

The sensitive percussion fuse , which has been in use since 1861, caused the projectile to disintegrate immediately when it hit the target or the ground and thus further spread most of the fragments. In addition, there was the delay fuse , which let the grenade penetrate deep into cover or ricochet off to the subsequent air explosion ( ricochet ).

So-called double fuses were also used. They either gave a detonation point on a previously calculated point on the trajectory or functioned as an impact fuse . Its time mechanism was based on a burning powder soul, later on a precision clockwork. For small-caliber rapid - fire cannons , the unification of grenades and cartridges to form cartridge ammunition (also: grenade cartridge or cartridge ammunition) prevailed around the turn of the century , which was later also used in light field cannons, anti-tank and anti-aircraft guns, but also in combat vehicle and assault cannons .

Explosive grenades , the high explosive shells that appeared around 1890, were filled with explosive explosives. Picric acid and cellulose nitrate (nitrocellulose, gun cotton) were used, for example. They had a significant impact on warfare, as classic fortifications with walls made of masonry and earth could not withstand the new shells.

During the First World War, the artillery had various types of grenades , for example HE shells , flares, concrete shells and shrapnel. Grapes were only intended for self-defense of the firing position. With chemical warfare, gas grenades came into use. The defense against armored combat vehicles from 1916 onwards forced the development of special grenades with floor detonators (anti-tank agents). In the field artillery, ballistic hoods came into use, with which the grenades overcame air resistance more easily and achieved a greater firing range.

At the beginning of the war, the German and Austrian artillery also had unitary projectiles , which combined the functions of high explosive grenades and shrapnel and was intended to simplify the supply of ammunition. However, since these projectiles were very expensive to produce, the Central Powers soon switched to conventional projectiles again after the start of the war.

During the Second World War, the increased combat power of the armored weapon led to the introduction of highly effective armor-piercing grenades ( shaped charge grenades ), which, with explosives arranged in the shape of a funnel, develop a gas jet or later "metal jet" of high energy that penetrates the armor. Since the spin of the armor-piercing shells reduces the penetration power of the gas jet, with modern armament the shaped charge grenades are mostly fired from smooth barrels. During the war, sub-caliber shells were also produced , the hard metal core of which, thanks to the high material density, the small cross-section and the additional energy transmitted by the projectile body, can penetrate even thick armor. Technical developments further led to improved flare and flare grenades, which contain a burning charge with a parachute in their jacket, which is ejected by a special charge after a set time.

Even after the Second World War, efforts were made to increase the overall combat value of guns and launchers through the quality of the grenades . In this way, the firing ranges can be increased considerably with active-reactive projectiles. The grenade receives its initial speed from a conventional propellant charge and is additionally accelerated on part of the flight path by a rocket engine. The grenade is stabilized either by twisting it or by means of wings or guide fins. Target-seeking grenades can improve accuracy, whereby in the 1970s the so-called final phase control of the grenade according to the principle of semi-active target search using laser energy became operational. In the air defense or air defense infrared sensors play in the detonators of grenades a significant role. Other self-steering methods are based on the radar principle , on optical contour recognition or on the electronic response to the magnetic field generated by metallic targets. In addition to the guided missiles, wing-stabilized sub-caliber and shaped charge grenades with high-energy propellant charges dominate the tank defense equipment .

In order to achieve maximum fire effect, grenades of caliber 175 and 203 mm and in some cases also caliber 155 mm for firing nuclear charges were set up towards the end of the last century . Special expectations were placed on the missile launcher's grenades, which were constructed as cassette projectiles and which, among other things, were designed as spherical splinter heads, fog heads or multiple mine heads. Such projectiles should achieve an effect in area fire that comes close to that of light nuclear weapons.

In addition to the simple high-explosive grenade, there are special arrangements of the effective charge to achieve greater effectiveness against certain targets. With the internal structure, the effectiveness against certain targets can be increased, for example by a shaped charge . The outer structure (“jacket”) usually consists of steel and is pre- fragmented to create a splinter effect.

Depending on its filling, the grenade can achieve the following effects:

Projectiles for grenade launchers (mortars) with a smooth barrel are not twist-stabilized, but mostly wing-stabilized.

A dud is called a grenade that has reached the target but has not been dismantled and remains ineffective. The cause can be, for example, igniters that have become wet. Certain detonators use black powder as a detonator. If black powder gets wet, it will no longer ignite even after drying, because a component, the saltpeter , has crystallized out. A soft surface at the point of impact can also lead to a technically perfect grenade becoming a dud. In this case the ground offers enough resistance to brake the projectile, but not enough to trigger the percussion fuse.

Rapid impact on the surface of a compact mass of water can lead to the triggering of an impact fuse if the angle between the direction of flight and the water surface is sufficiently large, thanks to the low compressibility of water. "Water becomes as hard as concrete" is the common metaphor .