Detonators are metal capsules that contain a small amount of initial explosive . They are used to safely detonate explosives. If a detonator is connected to an explosive charge, one speaks of a blow charge or cartridge .

Construction of a detonator

Small amounts of explosive explosives are used as cargo, which can be detonated by a low thermal or mechanical load . A two-stage charge consists, for example, of a primary charge ( lead azide or earlier fatal mercury ) and a secondary charge made of tetryl or nitropenta . 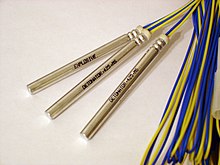 Detonators are detonators with an integrated electric detonator.

Earlier detonators and electrically ignitable were firing moment detonators supplied separately and clipped together before use. Today, largely industrially manufactured detonators have prevailed and detonators are only used in a few cases, such as for blasting ice or snow fields or in the military. Here they are strangled to the fuse with a strangler in order to detonate thrown charges .