Garnet is a redirect to this article. See also garnet (disambiguation) .

The garnet group (short grenade ) is an important group of rock-forming minerals from the department of island silicates (nesosilicates).

The garnet minerals mostly crystallize in the cubic crystal system and form predominantly isometric crystals with the characteristic shapes of the rhombic dodecahedron (outdated also garnethedron ), icositetrahedron and their combinations.

Garnets are generally transparent to translucent, with many foreign admixtures and in coarse mineral aggregates also opaque. Undamaged or unweathered crystal surfaces have a glass-like to grease-like gloss . The color of the garnet is very variable, even if reddish color varieties predominate. The palette ranges from light green to yellow-green to dark green, light yellow to yellow-orange and orange-red as well as from a light pink to an almost black-looking dark red. Colorless and brown varieties are less common, and very rarely also color-changing ( shimmering ) and blue garnets. However, the line color is always white.

Opened fruit of the pomegranate 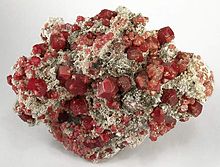 compared to a garnet mineral grade

The term garnet was first coined in the Middle Ages , but has its origins in the Latin word granum for grain or kernel or granatus for grainy or kernel-rich and on the one hand refers to the occurrence of the mineral in grains, which is similar to the pomegranate kernels ( Punica granatum ), on the other hand also on the orange-red to red-violet color of the flower, fruit and seeds of the pomegranate.

Garnets were already used as gemstones in ancient times . In the Middle Ages they were known together with rubies and spinels under the designation carbuncle (also carbuncle stone ) - most of them came from India at that time. But they were particularly popular in the 19th century, when Bohemian pyropes were so popular that they were shipped to America.

The 9th edition of Strunz's mineral classification, which has been in effect since 2001, also assigns the garnet group to the “island silicates” department. However, this is further subdivided according to the possible presence of further anions and the coordination of the cations involved , so that the garnet group with the system no. 9.AD.25 according to the composition of the members almandine, andradite, blythite , calderite, goldmanite, grossular, henritermierite , hibschite, holtstamite , hydroandradite , katoite , kimzeyite , knorringite , majorite , momoiite ( IMA 2009-026 ), morimotoite , pyrope , Schorlomit , Spessartin, Skiagit , Uwarowit and Wadalit in the subsection “Island silicates without further anions; Cations in octahedral [6] and usually greater coordination ”can be found.

The classic classifications listed above determine the main groups (classes) based on their composition and subdivide them according to structural criteria.

The current classification of the grenade, which was developed by the International Mineralogical Association (IMA) in 2013, works in reverse. It defines the garnet upper group on the basis of the structure type and divides it according to chemical aspects, the cation charge on the tetrahedrally coordinated Z position, into 5 groups and 3 individual minerals. In addition, a classification according to the charge distribution on the grid positions was inserted and hypothetical end links added.

The IMA classification does not break down the grenade into subgroups. In older literature there is a division into two main groups / rows based on common mixed crystal rows:

Grenades come in massive or granular form, but often also as macroscopic crystals that can weigh up to 700 kg.

Garnets are particularly common in metamorphic rocks such as gneiss , mica schist or eclogite ; they also occur in igneous rocks and sedimentary in heavy mineral soaps (beach sediments, river sediments). Most of the natural gemstone garnets found today come from the USA , South Africa and Sri Lanka .

The exact chemical composition is always related to that of the surrounding rock: For example, the magnesium-rich pyrope often occurs in peridotites and serpentinites , while green uvarovite occurs mainly in chromium-containing serpentinite rock.

During the metamorphosis of silicate pelites , garnets rich in almandine form from approx. 450 ° C in the reaction of chloritoid + biotite + H 2 O to garnet + chlorite . At low temperatures, the garnet mixed crystals are rich in spessartine and, as the temperatures rise, they increasingly contain almandine. From approx. 600 ° C, garnet forms when staurolite is broken down . As the temperatures continue to rise, the grenades become increasingly richer in pyrope and even when the rock begins to melt, grenades can still be formed anew. B. in the reaction of biotite + sillimanite + plagioclase + quartz to garnet + potassium feldspar + melt. Garnet only degrades into spinel + quartz at temperatures above 900 ° C or into orthopyroxene + sillimanite at high pressures .

In the suite of metabasites (e.g. metamorphic basalts ), garnet occurs to form rock in eclogites, and the garnet mixed crystals are rich in pyrope and grossular .

With increasing pressure, garnet forms at the transition from granulite facies to eclogite facies from approx. 10 kbar, 900 ° C when orthopyroxene and plagioclase react to garnet, clinopyroxene and quartz . In blueschists initially Fe-rich shell that on the way to form eclogite facies increasingly Pyrop- and grossularite richer.

Under certain lithofacial circumstances, garnets undergo transformation or decomposition within metamorphic rocks. The result of these processes is called kelyphite . This creates numerous new minerals.

Garnets generally crystallize with cubic symmetry in space group Ia 3 d (space group no. 230) . The unit cell contains 8 formula units and, depending on the composition, has an edge length of 1,146 nm (pyrope) to 1,256 nm (katoite). Template: room group / 230

Structure of the garnet structure

The oxygen anions occupy the general lattice position 96h with the point symmetry 1 . Each O 2− anion is surrounded by 4 cations:

Unlike other high-density oxide structures, the oxygen ions do not form the closest packing of spheres . Large 8-fold coordinated ions would not find a place in a cubic or hexagonal close packing of oxygen spheres. Due to the complex connection of all coordination polyhedra via common corners and, above all, many common edges, the garnet structure nevertheless achieves a high density.

Depending on their size and charge, the cations occupy three different, special lattice positions where they are surrounded by 4, 6 or 8 oxygen ions. 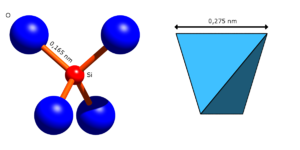 The Z cations (Si 4+ ) sit on the lattice position 24d with the point symmetry 4 , where they are surrounded by 4 oxygen ions which are located at the corners of a tetrahedron.

The ZO bond lengths determined are between 0.163 nm (pyrope, almandine) and 0.165 nm (goldmanite). The ZO 4 coordination tetrahedra have two pairs of edges of different lengths:

The Y cations sit on the lattice position 16a with the point symmetry 3 , where they are surrounded by 6 oxygen ions, which are located at the corners of an octahedron. The YO bond lengths determined are between 0.19 nm (pyrope) and 0.20 nm (andradite). The GO 6 coordination polyhedron has two different edges: 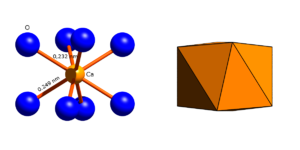 The X cations sit on the lattice position 24c with the point symmetry 222, where they are surrounded by 8 oxygen ions which are located at the corners of a dodecahedron ( trigondodecahedron ). The XO bond lengths determined are between 0.22 nm (pyrope) and 0.25 nm (andradite, glodmanite). The XO 8 coordination polyhedron has 4 different edges: 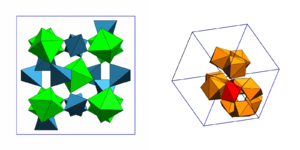 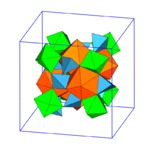 Because of its hardness, garnet is also used as an abrasive in sandblasting and water jet cutting.

In particular, artificially produced crystals with a garnet structure are used in precision mechanical and optical instruments. In contrast to the natural minerals, instead of silicon, other elements are often incorporated here on the tetrahedron square. Yttrium aluminum garnet (YAG, Y 3 Al 2 [Al O 4 ] 3 ), in which about one percent of the yttrium 3+ ions are replaced by neodymium 3+ ions, is a laser crystal ( Nd: YAG- Laser ), as well as Yb: YAG laser doped with ytterbium and Er: YAG laser doped with erbium . The yellow luminescence converter of the white LEDs was a cerium-doped YAG at the beginning of the development. Yttrium-iron-garnet (YIG) and relatives are used as microwave ferrite, resonators or as YIG filters in high-frequency technology.

In the 1970s and 1980s, grenades were used in the manufacture of magnetic bubble memory because of their special ferrimagnetic properties .

Grenades are used in various forms as gemstones . One differentiates among other things the dark red pyrope, which is also called kaprubin, the red black almandine, the emerald green uwarowite, the yellow green andradite, the black schorlomite and melanite, the transparent-greenish demantoid and the orange-red Spessartin. There is also grossular. In addition, there has been a new variant for several years, the orange mandarin garnet. Grenades are also known as the little man's gems.

Wikisource: About the Uvarowite and Garnet regarding their destruction  - Sources and full texts