Ytterbium [ ʏˈtɛrbiʊm , listen ? / i ] is a chemical element with the element symbol Yb and the atomic number 70. In the periodic table it is in the group of lanthanoids and is therefore also one of the rare earth metals . Like the other lanthanides, ytterbium is a heavy metal with a silver sheen . The properties of ytterbium do not follow the lanthanide contraction , and due to its electron configuration , the element has a significantly lower density and a lower melting and boiling point than the neighboring elements.

Ytterbium was discovered in 1878 by Jean Charles Galissard de Marignac while studying gadolinite . In 1907, Georges Urbain , Carl Auer von Welsbach and Charles James separated another element, the lutetium , from Marignac's ytterbium. The previous name was retained after a lengthy discussion contrary to the wishes of Welsbach, who had proposed Aldebaranium .

Technically, this element and its compounds because of the complicated separation of the other lanthanides are only in small amounts, including as a dopant for Yttrium Aluminum Garnet - laser used. Ytterbium (III) chloride and ytterbium (II) iodide are reagents in various organic synthesis reactions. 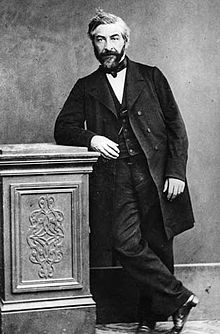 Ytterbium was discovered in 1878 by the Swiss chemist Jean Charles Galissard de Marignac . He examined gadolinite more closely and tried to separate the insoluble erbium from the other mineral components by decomposing nitrates in hot water . He discovered that the crystals obtained did not consist uniformly of red erbium nitrate , but that other colorless crystals remained. The measured absorption spectrum showed that these must be crystals of a previously unknown element. He named this after the place where the gadolinite was found in Ytterby ( Sweden ) and because of its similarity to the yttrium ytterbium . The two elements were separated in another experiment by adding hyposulphurous acid to a solution of the chlorides .

In 1907, the French Georges Urbain , the Austrian Carl Auer von Welsbach and the American Charles James recognized independently of one another that the ytterbium found by Marignac was not a pure element, but a mixture of two elements. They were able to separate this mixture into the now pure ytterbium and lutetium . Carl Auer von Welsbach named the elements Aldebaranium (after the star Aldebaran ) and Cassiopeium , while Urbain specified Neoytterbium and Lutetium as names. In 1909, the international atomic weight committee, consisting of Frank Wigglesworth Clarke , Wilhelm Ostwald , Thomas Edward Thorpe and Georges Urbain, determined that Urbain was entitled to the discovery of lutetium and that the names he had chosen would endure. However, the old name Marignacs was retained for the ytterbium.

Elemental ytterbium was first obtained in 1936 by Wilhelm Klemm and Heinrich Bommer . They obtained the metal by reducing ytterbium (III) chloride with potassium at 250 ° C. They also determined the crystal structure and the magnetic properties of the metal.

Ytterbium is a rare element on earth, its abundance in the continental crust is about 3.2  ppm .

Ytterbium occurs as a component of rare earth minerals, especially those of yttrium and the heavier lanthanoids such as xenotime and gadolinite . Xenotim from Malaysia contains up to 6.2% ytterbium. Cerite earths such as monazite and bastnäsite , on the other hand, contain lower amounts of ytterbium, so monazite contains between 0.12 and 0.5% of the element depending on the deposit.

The most important sources for ytterbium are the monazite and xenotime deposits in China and Malaysia (there as an accompanying mineral of cassiterite ). Due to the low demand, the supply situation with ytterbium is not viewed as critical.

The extraction of ytterbium is complicated and tedious, especially due to the difficult separation of the lanthanides. The starting minerals such as monazite or xenotime are first digested with acids or alkalis and brought into solution. The separation of the ytterbium from the other lanthanoids is then possible by various methods, the separation by ion exchange being the technically most important method for ytterbium, as well as for other rare lanthanoids. The solution with the rare earths is applied to a suitable resin to which the individual lanthanide ions bind to different degrees. They are then removed from the resin in a separation column with the help of complexing agents such as EDTA , DTPA or HEDTA , and the different strengths of binding to the resin thus separate the individual lanthanides.

Like the other lanthanides, ytterbium is a silvery, soft heavy metal . It has an unusually low density of 6.973 g / cm 3 , which is significantly lower than that of the neighboring lanthanoids such as thulium or lutetium and is comparable to that of neodymium or praseodymium . The same applies to the relatively low melting point of 824 ° C and the boiling point of 1430 ° C (Lutetium: melting point 1652 ° C, boiling point 3330 ° C). These values oppose the otherwise applicable lanthanide contraction and are caused by the electron configuration [Xe] 4f 14 6s 2 of the ytterbium. Due to the completely filled f-shell, only two valence electrons are available for metallic bonds and therefore there are lower binding forces and a significantly larger metal atom radius.

Three different crystal structures at atmospheric pressure and three other high pressure modifications of ytterbium are known. At room temperature the metal crystallizes in a cubic close packing of spheres with the lattice parameter a = 548.1 pm. At higher temperatures and pressures, this structure changes into a body-centered cubic spherical packing, with the transition temperature at about 770 ° C. at atmospheric pressure and 4 GPa at room temperature. At low temperatures, a hexagonal, densest structure is stable, the structural phase transition , which is between 0 and 45 ° C, is strongly dependent on the purity, pressure and stresses in the metal. These phases have different magnetism . While the hexagonal phase (as expected from the fully occupied orbitals) is diamagnetic , the face-centered cubic structure shows paramagnetism (probably due to small amounts of Yb 3+ in the metal).

The order of the high pressure modifications does not correspond to the order often found in other lanthanides. There are no known modifications of ytterbium with a double-hexagonal structure or a samarium structure. The body-centered cubic structure, which is stable from 4 GPa, is followed by a hexagonal, densest phase at 26 GPa. The next phase transition takes place with a further increase in pressure at 53 GPa and above this pressure a cubic-dense structure is again formed. Another known phase transition occurs at 98 GPa. From this pressure up to at least 202 GPa, a hexagonal structure is most stable, with the space group P 3 1 21 (space group no. 152) , which is also called the h P3 structure. With the increase in pressure a change in the electronic structure of ytterbium, whereby an electron from the f orbital in a d-orbital transitions, and the electron configuration is then as with other lanthanides trivalent (trivalent) . Template: room group / 152

Ytterbium is a typical base metal that reacts with most non-metals , especially at higher temperatures . It reacts slowly with oxygen under standard conditions in dry air, faster in the presence of moisture. Finely divided metallic ytterbium is, like other base metals, flammable in air and under oxygen. Mixtures of finely divided ytterbium and organohalogen compounds such as hexachloroethane or polytetrafluoroethylene burn with an emerald green flame. The reaction of ytterbium with hydrogen is not complete, because the hydrogen enters the octahedral gaps in the metal structure and non- stoichiometric hydride phases are formed, the composition of which depends on the temperature and the hydrogen pressure.

Ytterbium dissolves slowly in water and faster in acids with the formation of hydrogen. Trivalent, colorless ytterbium ions are usually present in solution in the form of the hydrate [Yb (H 2 O) 9 ] 3+ . The yellow-green divalent ytterbium ion is not stable in aqueous solution; it oxidizes to the trivalent ion with formation of hydrogen with a half-life of about 2.8 hours. If ytterbium is dissolved in liquid ammonia , a blue solution is formed by solvated electrons , as with sodium .

The radioactive isotope 169 Yb with a half-life of 32 days is created together with the short-lived 175 Yb (half-life 4.2 days) through neutron activation during the irradiation of ytterbium in nuclear reactors . It can be used as a source of gamma rays , for example in nuclear medicine and radiography .

Ytterbium and its compounds are only used commercially to a very limited extent. As an alloy component , it improves the grain refinement , strength and mechanical properties of stainless steel . The use of ytterbium alloys in dentistry was investigated .

Ytterbium is as other lanthanides as a dopant for yttrium aluminum garnet - laser ( Yb: YAG laser ) used. Advantages over Nd: YAG lasers lie in the higher possible maximum doping, a longer service life of the higher energy level and a larger absorption bandwidth. Ytterbium is also an important dopant in fiber lasers , which can be used especially for high-power fiber lasers due to advantages similar to those of the YAG laser. These include the high doping, a large absorption range between 850 and 1070 nm and also the large emission range between 970 and 1200 nm.

Ytterbium has been investigated experimentally as an alternative to cesium for operating atomic clocks . It was able to measure four times the accuracy of a cesium atomic clock.

Ytterbium is currently being investigated as a substitute for magnesium in heavy active charges for kinematic infrared decoys. Due to the significantly higher emissivity of ytterbium (III) oxide in the infrared range compared to magnesium oxide , ytterbium shows a higher radiation output than conventional active compounds based on magnesium / Teflon / Viton (MTV).

Ytterbium occurs only in minimal amounts in the body and has no biological significance. Few living things like lichens are able to ingest ytterbium and have ytterbium contents of over 900 ppb. In brown algae ( Sargassum polycystum ) , a biosorption of 0.7 to 0.9 mmol · g −1 was measured.

Ytterbium and its soluble compounds are slightly toxic; for ytterbium (III) chloride, an LD 50 value of 395 mg / kg for intraperitoneal and 6700 mg / kg for oral administration was determined in mice . In animal experiments on rabbits, ytterbium chloride is only slightly irritating to the eyes and only irritates the skin if it is injured. Ytterbium is considered to be teratogenic ; In a study with golden hamster embryos, skeletal changes such as fused or additional ribs or changes in the spine were found after administration of ytterbium chloride .

Compounds of ytterbium in the oxidation state +2 and +3 are known, whereby, as with all lanthanides, +3 is the more frequent and more stable level.

With the halogens fluorine , chlorine , bromine and iodine , ytterbium forms two series of salts with the formulas YbX 2 and YbX 3 . The dihalides oxidize easily to the trihalides, at higher temperatures they disproportionate to ytterbium trihalides and ytterbium.

Ytterbium (III) fluoride is used as an inert and non-toxic filler in dentistry . It continuously releases fluoride, which is important for dental health, and is also a good X-ray contrast medium .

A number of organometallic compounds are known. Compounds with a sigma bond between ytterbium and carbon are only known to a limited extent, since with these, as with many transition metals, secondary reactions such as β-hydride elimination can easily occur. They are therefore stable with sterically demanding residues such as the tert-butyl group or a larger number of smaller residues such as in a hexamethyltterbate complex [Yb (CH 3 ) 6 ] 3+ . The most important ligands of ytterbium are cyclopentadienyl and its derivatives. Sandwich complexes of ytterbium are not known with cyclopentadienyl, but only with larger ligands such as pentaphenylcyclopentadienyl. Furthermore, complexes with η 5 coordinated cyclopentadienyl ligands are known: CpYbX 2 , Cp 2 YbX and Cp 3 Yb (X can be a halide, hydride, alkoxide or others).

In the series Warehouse 13 is located can of worms in a chamber of ytterbium in the warehouse, is destroyed by this and hope leave the rifle.