When formulating redox equations , usually only the oxidation numbers of the atoms are given that are oxidized or reduced because the oxidation numbers of the other atoms do not change. The number of electrons exchanged must be taken into account when checking the charge balance of a redox equation. It must be exactly as large as the difference between the two oxidation numbers. The atomic balances must be balanced by the accompanying substances present in the reaction medium, such as. B. water H 2 O and acid (hydroxonium ions H 3 O + ) or base (hydroxyl ions OH - ). As a final check, the charge balance of the reaction equation must then also be correct.

Example: Two partial reactions of redox reactions with the permanganate anion as the oxidizing agent, which is reduced differently, either in an acidic solution or in a basic solution.

A stoichiometric redox reaction is z. B. the Tollensprobe , in which acetaldehyde is oxidized with Ag + to acetic acid and elemental Ag is formed.

With different hydrocarbons, the different oxidation states of the carbon atoms become clear.

Oxidation numbers in elements, inorganic and organic, neutral or ionic compounds can be determined with the help of the following rules or checked after determination:

Determination by division based on electronegativity

To determine the oxidation number in a compound, binding electron pairs are assigned to the more electronegative binding partner (formal heterolytic cleavage ). Bonding electron pairs between the same atoms are shared (formal homolytic cleavage ). The atoms in modifications of the elements thus have an oxidation number of zero. 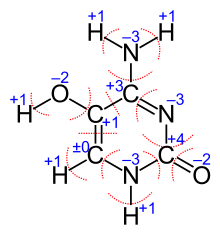 Determination of the oxidation numbers using 5-hydroxycytosine as an example

The graphic on the right shows an example of the procedure for determining the oxidation numbers of the atoms of the 5-hydroxycytosine molecule. The procedure on the carbon atom with the oxidation number ± 0 is explained as an example. This carbon atom forms three bonds to neighboring atoms, single bonds to nitrogen and hydrogen and a double bond to the neighboring carbon atom. The comparison of the electronegativities of the elements involved in the bonds gives: