Iridium is a chemical element with the symbol Ir and the atomic number 77. It is one of the transition metals , in the periodic table it is in group 9 (in the older counting part of the 8th subgroup ) or cobalt group . The very heavy, hard, brittle, silver-white shiny precious metal from the group of platinum metals is considered to be the most corrosion-resistant element. Below 0.11 Kelvin it changes to a superconductive state.

Iridium ( ancient Greek ἰριοειδής irio-eides "rainbow -like " after the many colors of its compounds) was discovered in London in 1804 by Smithson Tennant together with osmium . When raw platinum was dissolved in aqua regia , both platinum metals were found in the insoluble black residue. The variety of colors of the iridium salts inspired Tennant to the name Iridium. The “ original kilogram ” and the “ original meter ” also consist of an iridium alloy; Both have been kept in Paris in the Bureau International des Poids et Mesures since 1898 .

Iridium is rarer than gold or platinum . After rhenium, together with rhodium and ruthenium, it is the rarest non-radioactive metal. Its proportion in the continental crust is only 1  ppb . In nature it occurs elementally in the form of small grains or accompanied by platinum. With osmium it forms two naturally occurring minerals:

Important deposits are in South Africa , the Urals , North and South America , Tasmania , Borneo and Japan .

Free iridium as well as other elements of the platinum group are found in river sands. In addition, iridium is produced in the smelting of nickel ores . 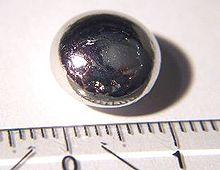 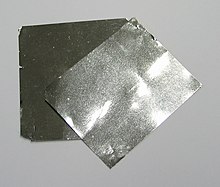 Because of its hardness and brittleness , iridium is difficult to work with. In the naturally occurring isotopic composition, iridium is the second most dense element after osmium .

In red heat, iridium oxidizes incompletely to black IrO 2 , which breaks down again above 1140  ° C. Like osmium, iridium is also volatile when exposed to heat and especially when the oxygen content is higher than oxide IrO 3 . In contrast to osmium, however, it is deposited again as metal or IrO 2 in cold spots . In powder form, it is a flammable solid that can be easily ignited by brief exposure to an ignition source. The more finely the substance is distributed, the greater the risk of ignition. In compact form, it is not flammable. It is stable in mineral acids , including aqua regia . In chloride melts, however, it is converted to double chlorides in the presence of chlorine , e.g. B. Na 2 [IrCl 6 ].

There are two natural isotopes of iridium, 34 radioisotopes and 21 core isomers , of which the core isomer 192m2 Ir is the most stable with a half-life of 241 years. It decays through internal conversion to 192 Ir, which is the isotope with the longest half-life with a half-life of 73.831 days. 192 Ir decays as a beta emitter to the platinum isotope 192m Pt, most of the others to osmium . The remaining isotopes and core isomers have half-lives between 300 µs at 165 Ir and 11.78 days at 190 Ir.

Because of its gamma radiation with an energy of about 550 keV (kiloelectron volt), 192 Ir is suitable for radiographic testing of components. For workpieces with a wall thickness of more than 20 mm, this isotope is usually used (regulated by standards, see e.g. DIN EN ISO 5579).

For non-destructive testing (NDT), the iridium emitter is usually welded in the form of a 2–3 mm large tablet in an emitter holder, and this is housed in a lockable type B work container, which is lined with depleted uranium to shield the gamma radiation .

Work containers for iridium emitters have the following dimensions: 20 cm long, 10 cm wide and 15 cm high. Due to the uranium jacket, the weight is around 13 to 20 kg, depending on the activity.

Iridium is often a component of alloys , which it gives hardness and / or brittleness. Platinum-iridium alloys are used for precision measurements, in medicine and mechanical engineering .

It is also used:

Iridium occurs in a relatively high concentration in that 66 million year old sediment layer that separates the chronostratigraphic systems of the Cretaceous and the Paleogene , and is considered an indication of a large meteorite impact, which, according to predominant scientific opinion, about 75 percent of the species of that time in addition to the dinosaurs fell victim; see also Iridium anomaly , Chicxulub crater and Cretaceous-Paleogene boundary .

Metallic iridium is non-toxic because of its durability. As a powder or dust it is highly flammable, in compact form it is non-combustible. Iridium compounds must be classified as toxic.

Many iridium salts are colored: with chlorine it forms olive-green iridium (III) chloride or dark blue-black, not quite defined iridium (IV) chloride . It reacts with fluorine to form yellow, volatile iridium (VI) fluoride or yellow-green iridium (V) fluoride . The oxidation state + IX predicted for Iridium years ago was also confirmed experimentally in 2014 by the synthesized [IrO 4 ] + . It is the only element in which this oxidation state is known in a compound. In addition to the oxides and halides of iridium, numerous octahedral, diamagnetic iridium (III) complexes, such as amine complexes and chloro complexes, are known. The reduction of iridium (III) chloride in alcohol in the presence of π-acceptor ligands leads to square planar iridium (I) complexes, of which the Vaskas complex is best studied. By reducing iridium (III) chloride with carbon monoxide , one obtains the iridium carbonyls like the canary yellow [Ir 4 (CO) 12 ] and the red [Ir 6 (CO) 16 ]. Iridium complexes can be used in homogeneous catalysis, especially in hydrogenation reactions.