Lawrencium ( listen ? / I ) is an exclusively artificially produced chemical element with the element symbol Lr and the ordinal number 103. In the periodic table it is in the group of actinides ( 7th period , f-block ) and is also one of the transuranic elements . Lawrencium is a radioactive metal, which, however, has not been represented as a metal due to the small quantities available. It was discovered in 1961 when californium was bombarded with boron cores. This element was named after Ernest Lawrence . He is the inventor of the cyclotron , a particle accelerator that was an important prerequisite for the discovery of many transuranic elements. The name was finally confirmed by the IUPAC in 1994 . 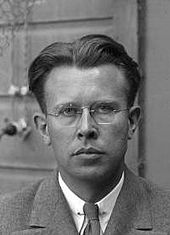 Albert Ghiorso (2nd from left) completing the periodic table after the discovery of the Lawrencium (1961), at that time still with the element symbol "Lw".

Lawrencium was first produced in 1961 by the American scientists Albert Ghiorso , Torbjørn Sikkeland , Almon E. Larsh and Robert M. Latimer by bombarding californium isotopes with nuclei of boron atoms. On February 14, 1961, they announced the successful synthesis of the element.

Initially, the symbol “Lw” was chosen. In 1963 it was changed to "Lr" by IUPAC ( International Union for Pure and Applied Chemistry ).

In the periodic table , the Lawrencium with the ordinal number 103 is in the series of the actinides and closes them off. Its predecessor is nobelium , the subsequent element is rutherfordium , which, however, already belongs to the transactinoids and is a d element. Its analogue in the series of lanthanides is the lutetium , which also closes this.

Lawrencium is a radioactive and very short-lived metal. Twelve isotopes are known with half-lives ranging from a few seconds to 11 hours. Little is known about other properties of the element, as the short half-life makes empirical studies almost impossible.

The position of Lawrencium in the periodic table is controversial, since recent measurements show that the element has an extremely low ionization energy.

Classifications according to the CLP regulation are not available because they only include chemical hazard, which plays a completely subordinate role compared to the hazards caused by radioactivity . The latter also only applies if the amount of substance involved is relevant.