This article covers the chemical element; For information on the ASTAT statistics office, see the State Institute for Statistics of the Autonomous Province of Bozen - South Tyrol .

Astat [ asˈtaːt ] (from ancient Greek ἄστατος : "unstable, unsteady") is a radioactive chemical element with the element symbol At and the atomic number 85. In the periodic table it is in the 7th main group or the 17th  IUPAC group and thus counts the halogens . Astatine is formed from the natural decay of uranium . Astatine is one of the rarest naturally occurring elements on earth that must be artificially created when needed. 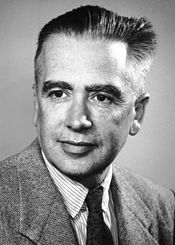 Emilio Gino Segrè, one of the discoverers of astatine

When Dmitri Mendeleev established his periodic table in 1869, he predicted the existence of some elements not yet discovered at the time, including one that would take the place below iodine . As a result, some scientists tried to find this element, which was known as "eka-iodine".

In 1931, Fred Allison claimed that he and his coworkers at the Alabama Polytechnic Institute (now Auburn University ) discovered the missing element and named it Alabamine (Ab). However, their discovery could not be confirmed and was later found to be false.

Also searching for a member of the radioactive thorium family , the chemist De Rajendralal Mitra found two new elements in Dhaka , Bangladesh (then British India) in 1937 . The first he called Dakin (Eka-Iod), probably after the English name for Dhaka (Dacca), the other Gourium . However, both discoveries could not be confirmed.

The name Helvetium was in turn suggested by the Swiss chemist Walter Minder when he announced the discovery of element 85 in 1940. However, in 1942 he changed his proposal to Anglohelvetium .

The discovery of astatine ( ancient Greek ἀστατέω = "to be inconsistent", due to the radioactive decay) could be confirmed for the first time in 1940 by the scientists Dale Corson , Kenneth MacKenzie and Emilio Gino Segrè , who artificially made it in the University of California by bombarding it with bismuth made with alpha particles .

Three years later, Berta Karlik and Traude Bernert found the short-lived element as a product of the natural decay process of uranium .

Astatine is produced by bombarding bismuth with alpha particles in the energy range from 26 to 29 MeV. The relatively long-lived isotopes 209 At to 211 At are obtained, which are then sublimed in a stream of nitrogen at 450 to 600 ° C. and separated on a cooled platinum disk.

With the help of mass spectrometry , this radioactive element has been shown to behave chemically like the other halogens, especially iodine (it accumulates like this in the thyroid gland ). Astatine is more metallic than iodine. Researchers at Brookhaven National Laboratory have conducted experiments to identify and measure elemental chemical reactions that involve astatine.

With the online isotope mass separator ( ISOLDE ) at CERN , the ionization potential of astatine was determined in 2013 to be 9.31751 (8) electron volts .

Astatine has about 20 known isotopes , all of which are radioactive ; the longest lived is 210 At with a half-life of 8.3 hours.

Organic astatine compounds are used in nuclear medicine to irradiate malignant tumors. Because of their short half-lives, astatine isotopes are suitable when taken internally as radioactive preparations for marking the thyroid gland. The element is accumulated in the thyroid and stored in the liver.

The chemical properties of astatine could only be determined with tracer experiments due to the small amounts . They are very similar to those of iodine, but it is a weaker oxidizing agent . So far, various astatides, interhalogen compounds and organic compounds could be detected. The anions of the corresponding oxo acids are also known. Because of its more electropositive character compared to other halogens, it is only partially precipitated by silver . The complex-stabilized cation At (Py) 2 (Py = pyridine ) exists for this , which means that astatine can also be deposited cathodically . The hydride, astathydrogen HAt, was also detected.