Neodymium (nomenclature recommendation was temporarily neodymium ) is a chemical element with the element symbol Nd and the atomic number 60. In the periodic table it is in the group of lanthanides and is therefore also one of the rare earth metals . The element name is derived from the Greek words νέος neos 'new' and δίδυμος didymos 'twin' (as a twin of lanthanum ). The metal is used in the form of the alloy neodymium-iron-boron for strong permanent magnets . 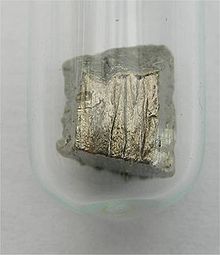 In 1841 Carl Gustav Mosander extracted the rare earth Didym from cerite earth . In 1874 Per Teodor Cleve noticed that Didym actually consisted of two elements. In 1879 Lecoq de Boisbaudran isolated samarium from Didym, which he extracted from the mineral samarskite . In 1885 Carl Auer von Welsbach succeeded in separating didymium into praseodymium and neodymium, which form salts of different colors. Pure metallic neodymium was not presented until 1925.

Neodymium occurs naturally only in chemical compounds associated with other lanthanoids , preferably minerals:

The most important supplier with 91% of world production is China . This leads to considerable environmental problems there. “When the neodymium is separated from the extracted rock, toxic waste products are created, and radioactive uranium and thorium are also released during the mining process. At least some of these substances get into the groundwater, contaminate fauna and flora considerably and are classified as harmful to human health ”. Other economically exploitable deposits can be found in Australia , especially in the Northern Territory, which is exploited by Arafura Resources .

As with all lanthanoids , the ores are first enriched by flotation , then the metals are converted into their halides and separated by fractional crystallization , ion exchange or extraction .

After a complex separation of the neodymium components, the oxide can be converted to neodymium (III) fluoride with hydrogen fluoride and then reduced to neodymium with calcium to form calcium fluoride . Calcium residues and impurities are separated off by remelting in a vacuum.

This process was replaced in China around 1984 by fused-salt electrolysis of a mixture of neodymium fluoride, neodymium oxide and lithium fluoride. Formally, this process corresponds to the Hall-Héroult process, but the elementary neodymium is deposited on a perpendicular tungsten cathode, which is surrounded by an annular graphite anode. The molten neodymium is caught in a molybdenum tank, from which it is manually poured into an ingot mold. Each such electrolysis cell is operated as a single-chamber electrolysis cell. No verifiable information is known about the actual operation of the cells in the Chinese factories.

The Chinese government has announced that it will introduce stricter environmental regulations and take stronger action against illegal mines. At the beginning of June 2011 this intention appears to have been implemented for the first time. According to reports in the Financial Times, the state-owned producer (Baotou Steel Rare Earth) has a monopoly on mining and processing rare earths. 35 licensed businesses will be closed and compensated, nine more unlicensed businesses will be closed and not compensated. In the United States , the Mountain Pass mine in California and the Mount Weld mine in Australia are being reactivated. Both mines are operated by the Öko-Institut e. V. certifies acceptable environmental protection systems. However, there are also projects for the combined mining of rare earths in Greenland, in which the toxic residues are to be dumped into lakes .

The shiny silver-white metal is one of the lanthanides and rare earth metals . It is somewhat more corrosion-resistant in air than europium , lanthanum , cerium or praseodymium , but easily forms a pink-violet oxide layer that can flake off in air.

At high temperatures, neodymium burns to form sesquioxide Nd 2 O 3 . It reacts with water to form neodymium hydroxide Nd (OH) 3 , forming hydrogen . With hydrogen it reacts to the hydride NdH 2 . In addition to the main value / oxidation number 3, the oxidation numbers 2 and 4 also occur under special conditions.

Neodymium-iron-boron (Nd 2 Fe 14 B) is the material from which the strongest permanent magnets can currently be made. They achieve a remanence of up to 1.4 Tesla . The coercive field strength H cJ fluctuates in the range from 870 to 2750 kA / m.