The atomic structure of crystalline solids is described by the two terms lattice and base . 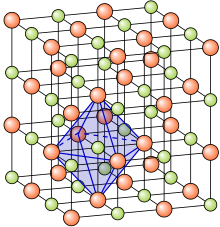 The crystal lattice , also called point lattice , is a regular three-dimensional arrangement of (mathematical) points. The unit cell is the subunit of the lattice . It contains all the information necessary to describe the crystal. The grid is created by the seamless, translationally symmetrical joining of the same unit cell in all three dimensions of space. The 14  Bravais grids describe all the possibilities of translational symmetry in three-dimensional space. The crystal lattice is only made up of points and therefore always centrosymmetrical .

The components of the crystal structure

The basis of a crystal structure consists of atoms , ions or molecules . It represents the smallest group of these elements, which are periodically repeated congruently in three-dimensional space . The base consists of at least one atom, but can also contain a few thousand atoms ( protein crystals ). In the case of sodium chloride , for example, the basis consists of a Na + and a Cl - ion.

A reference point is then assigned to each base (in the illustration the upper left corner of the rectangle). These reference points form the crystal lattice if you only look at the points ( called lattice in the picture ). They span the so-called basic vectors , which point from a grid point to its neighbors (in 2D : two, 3D : three). The parallelepiped spanned by these basic vectors is called a unit cell. This therefore has a grid point at each corner, but does not have to be drawn between directly adjacent points, but can be selected as large as desired.

Chemically identical solids can nonetheless occur in different crystal modifications that differ in their physical properties, for example have different melting points . This is called polymorphism. Differential thermal analysis (DTA) is a frequently used method for investigating polymorphism, which is of particular importance in pharmacy for the characterization of some medicinal substances . The DTA allows this complex phenomenon to be recognized and interpreted, especially if the analysis sample is a mixture of several crystal modifications.