Yttrium [ ˈʏtri̯ʊm ] is a chemical element with the element symbol Y and the atomic number 39. It is one of the transition metals and the rare earth metals , in the periodic table it is in the 5th period and the 3rd subgroup , or the 3rd  IUPAC group or Scandium group . Yttrium is named after its first location, the Ytterby mine near Stockholm , as are ytterbium , terbium and erbium .

Yttrium was discovered in 1794 by Johan Gadolin in the mineral ytterbit . In 1824 Friedrich Wöhler produced contaminated yttrium by reducing yttrium chloride with potassium. It was not until 1842 that Carl Gustav Mosander succeeded in separating the yttrium from the accompanying elements erbium and terbium .

Yttrium does not occur naturally in its elemental state. Yttrium-containing minerals (ytter earths) are always related to other rare earth metals. It can also be found in uranium ores. Monazite sands , which contain up to 3% yttrium, and bastnasite , which contains 0.2% yttrium, are commercially viable . It is also the main component of xenotime (Y [PO 4 ]).

Large deposits of monazite, discovered and exploited in Brazil and India in the early 19th century, made these two countries major producers of yttrium ores. It was not until the opening of the Mountain Pass Mine in California, which produced large amounts of bastnesite until the 1990s, that the USA became the main producer of yttrium, even though the bastnesite mined there contains only a small amount of yttrium. Since this mine was closed, China has been the largest producer of rare earths with 60%. These are extracted in a mine near Bayan Kuang , the ore of which contains xenotime, and from ion-absorbing clay minerals , which are mainly mined in southern China.

The concentrated yttrium oxide is converted into fluoride . The subsequent reduction to metal takes place with calcium in a vacuum induction furnace . 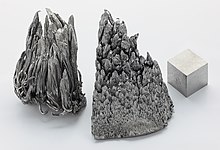 It is mostly trivalent in its compounds. However, there are also cluster compounds in which yttrium can assume oxidation states below 3. Yttrium is one of the light metals .

Metallic yttrium is used in reactor technology for tubes. The alloy with cobalt YCo 5 can be used as a rare earth magnet . Yttrium is used as a material for heating wires in ion sources in mass spectrometers . In metallurgy , small amounts of yttrium are used for grain refinement , for example in iron-chromium-aluminum heating conductor alloys , chromium, molybdenum, titanium and zirconium alloys . In aluminum and magnesium alloys, it increases the strength. Doping lithium iron phosphate batteries with yttrium increases their performance and durability.

The most important use of yttrium oxides and yttrium oxide sulfides, however, is the wide range of possible uses in trivalent europium (red) and thulium (blue) doped luminophores (fluorescent substances ) in television picture tubes and fluorescent lamps .

Yttrium ceramics and alloys are also used in:

As a pure beta emitter , 90 Y is used for therapy in nuclear medicine , for example for radiosynoviorthesis , radionuclide therapy for bone metastases , radioimmunotherapy and for colorectal carcinoma .

Yttrium is not considered an essential trace element. The toxic properties of the metallic yttrium do not lead to a classification as a hazardous substance. An occupational exposure limit for yttrium is not specified. The Occupational Safety and Health Administration (OSHA) recommends a MAK value of 1 mg / m 3 for an exposure period of 8 hours.