The title of this article is ambiguous. Further meanings are listed under bromine (disambiguation) .

Brom [ bʁoːm ] ( ancient Greek βρῶμος brōmos "stink") is a chemical element with the element symbol Br and the atomic number  35. In the periodic table it is in the 7th main group, or the 17th  IUPAC group and thus belongs together with fluorine , Chlorine , iodine , astatine and tenness to the halogens . Elemental bromine is present under normal conditions (temperature = 0 ° C and pressure = 1 atm) in the form of the diatomic molecule Br 2 in liquid form. Bromine and mercury are the only natural elements that are liquid under normal conditions.

In nature, bromine does not occur in elemental form, but only in various compounds. The most important compounds are the bromides , in which bromine occurs in the form of the anion Br - . The best known bromides are sodium bromide and potassium bromide . Bromides are a component of sea ​​water and have a number of biological functions. 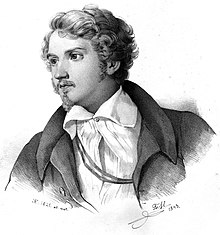 Justus Liebig was the first to isolate elemental bromine

Bromine was extracted in 1826 by the French chemist Antoine-Jérôme Balard from seaweed in the salt marshes near Montpellier, who recognized it as a previously unknown substance.

Two years before Balard, the German chemist Justus von Liebig was unwittingly producing elemental bromine in 1824. He was commissioned to analyze the salt brines of Salzhausen , as the city was planning a spa . While examining this brine, Liebig found a new substance that he interpreted as iodine chloride . 13 years later he admitted that his negligent analysis had robbed him of the discovery of a new element. Liebig wrote: “I know a chemist who, when he was in Kreuznach, examined the mother liquors of the salt works.” He then went on to describe his mishap and concluded with the words: “Since that time he has not proposed any more theories, if they have not been supported and confirmed by undoubted experimentation; and I can report that he didn't do anything bad about it. "

Even Karl Lowig has dealt with bromine, which he before 1825 by introducing chlorine in Kreuznacher won brine water, but Balard beat him to it with the publication of his discovery.

Industrial production began in 1860. Because of its pungent smell, Joseph Louis Gay-Lussac suggested the name “Brom” ( Greek for “ buck stink of animals”).

Bromine occurs in the form of bromides, the salts of hydrobromic acid . In terms of quantity, the largest deposits are found as dissolved bromides in seawater. Natural salt deposits (rock and potash salts) also contain small amounts of potassium bromide and potassium bromate . Bromine can also occur in the atmosphere in the form of molecular bromine and bromine oxide and can have a significant influence on atmospheric ozone chemistry and can be transported over long distances. During the polar spring, larger concentrations (> 10ppt) of BrO regularly destroy almost all of the tropospheric ozone. These events can also be observed from satellites using the DOAS method. In tropical regions with high bioactivity, strong emissions of halogenated hydrocarbons have been observed, which can ultimately contribute to the formation of BrO and ozone depletion through photolysis.

Bromine is essential for animals in traces. Bromide acts as a cofactor in a metabolic reaction that is necessary to build up the IV collagen matrix in the connective tissue .

The industrial production of elemental bromine takes place through the oxidation of bromide solutions with chlorine.

Brine and highly salty water from great depths as well as salt lakes and occasionally also sea water are used as bromide sources . Extraction from the residual liquors from potash extraction is no longer economical. Since 1961, the amount of bromine recovered annually has more than quintupled from around 100,000 tons to over half a million tons. The largest bromine producers are the United States, China, Israel, and Jordan.

In the laboratory, bromine can be produced by reacting sodium bromide with sulfuric acid and manganese dioxide in the heat. The bromine is separated off by distillation .

Liquid bromine with vapor in ampoule

The density of bromine is 3.12 g / cm 3 . The heavy red-brown liquid forms vapors that smell like chlorine and are more toxic than chlorine. Solid bromine is dark; it brightens as it cools down further. In water , it is moderate, organic solvents such as alcohols , carbon disulfide or carbon tetrachloride highly soluble. Bromine dissolved in water reacts slowly with the intermediate formation of hypobromous acid (HBrO) and the release of oxygen to form hydrogen bromide (HBr). The kinetically inhibited reaction is accelerated by (sun) light, so bromine water is stored in brown, less translucent bottles.

Bromine behaves chemically like the lighter chlorine , but reacts less energetically in the gaseous state. Moisture greatly increases the reactivity of the bromine. In contrast to chlorine, it only reacts with hydrogen at higher temperatures to form hydrogen bromide (colorless gas).

It reacts exothermically with many metals (e.g. aluminum) to form the respective bromide. Only tantalum and platinum are resistant to wet bromine . 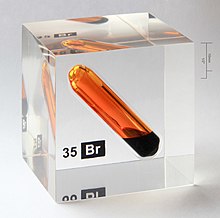 Bromide ions can be detected qualitatively with the help of chlorine water and hexane .

As with the other detection reactions for halides, the poor solubility of the silver salt of bromide can also be used for the wet-chemical detection of bromide ions . The same applies to the volumetric determination of the halides by titration .

To trace determination and speciation of bromide and bromate is ion chromatography used. In polarography , bromate shows a cathodic step at −1.78 V (versus SCE , in 0.1  mol / l KCl), where it is reduced to bromide. Traces of bromate can also be recorded using differential pulse polarography.

In the laboratory, when working with bromine, a three percent sodium thiosulphate solution is usually provided, as it can bind spilled bromine or hydrogen bromide very well. Here, form sodium bromide , elemental sulfur and sulfuric acid . The resulting acid can break down further thiosulphate into sulfur and sulfur dioxide:

Bromine is stored in containers made of glass , lead , Monel , nickel or Teflon .

Bromine forms compounds in various oxidation states from −1 to +7. The most stable and most common oxidation state is −1, the higher ones are only formed in compounds with the more electronegative elements oxygen , fluorine and chlorine . The odd oxidation states +1, +3, +5 and +7 are more stable than the even ones.

Inorganic compounds in which the bromine is in the −1 oxidation state and thus as an anion are called bromides . These are derived from the gaseous hydrogen compound hydrogen bromide (HBr). This is a strong acid and easily releases the proton in aqueous solutions . Bromides are generally readily soluble in water, exceptions are silver bromide , mercury (I) bromide and lead (II) bromide .

The bromides of the alkali metals , especially sodium bromide , are particularly well known . Also potassium bromide is used in large quantities, mainly as a fertilizer and for the production of other potassium compounds.

Lead bromide used to be released in large quantities when leaded fuel was burned (if dibromomethane was added to gasoline to make the lead volatile, see tetraethyl lead # Combustion in the engine ).

In addition to the bromine oxides, bromine and oxygen also form several acids in which a bromine atom is surrounded by one to four oxygen atoms. These are hypobromous acid , bromous acid , bromic acid and perbromic acid . As a pure substance, they are unstable and only known in aqueous solution or in the form of their salts.

Bromine forms a number of interhalogen compounds mainly with fluorine , and in some cases with the other halogens as well . Bromfluoride as bromine fluoride and bromine trifluoride have a strong oxidizing and fluoriend. While bromine is the more electropositive element in the fluorine-bromine and chlorine-bromine compounds in oxidation states +1 in bromine chloride to +5 in bromine pentafluoride , it is the more electronegative component in compounds with iodine . With this element the compounds iodobromide and iodotribromide are known.

A large number of organic bromine compounds (also organobromine compounds ) are produced synthetically. The bromoalkanes , the bromoalkenes and the bromoaromatics are important . They are used, among other things, as solvents, refrigerants , hydraulic oils , pesticides, flame retardants or pharmaceuticals.

The organobromine compounds also include the polybrominated dibenzodioxins and dibenzofurans .