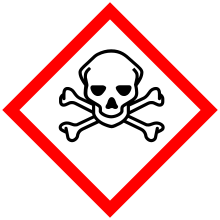 The GHS pictogram of a skull with crossed bones shown here denotes toxic substances and mixtures.

The toxicity itself is a property of the substance. In addition to its toxicity, the toxic effect of a substance on a living being depends crucially on the duration and exposure , i.e. on the dose and type of ingestion ( incorporation ): an oral intake often differs in the course of the poisoning from an inhalative one (due to the Respiration ), dermal (through skin contact), or even intravenous , intramuscular or intraperitoneal (through the abdominal cavity) absorption of the same substance. The complex substance property “toxicity” thus has a qualitative component (e.g. mechanism of action or reference to an organ) and a quantitative component that describes the toxic potency of the substance (including the dose-effect relationship).

The study of toxins , poisoning and their treatment is called toxicology .

Many substances have different toxic effects on different types of tissue or organs; This is followed by designations for the type of poisonous effect:

This is based on the fact that some toxins mainly have a damaging effect on certain metabolic areas or groups of substances (such as enzymes or proteins), sometimes only on one biomolecule in the body. The blood poison carbon monoxide, for example, binds to hemoglobin in the blood and thus hinders the transport of oxygen.

If poisons have a toxic effect on the DNA by causing changes there, they are referred to as mutagens . If they cause cancer , they are carcinogens . If a toxin causes malformations in fetuses, it is classified as a teratogen . Here, in some cases, minimal doses of the toxin are sufficient to produce a mutagenic, carcinogenic or teratogenic effect.

A few toxins have a toxic effect on almost all tissues and are also mutagenic and carcinogenic; these include mycotoxins such as aflatoxins and citrinin .

The toxicity of a substance is determined using various methods. The best-known measure of toxicity is the LD 50 or LC 50 value. There are also other toxicological parameters such as the NOEL , the DMEL , the DNEL , the PNEC , the LOEC or the IGC50 . There are considerations to estimate the toxicity of as yet unknown substances with the help of the quantitative structure-activity relationship QSAR before they are even synthesized.

In ecotoxicology , bioindicators are often used to measure the toxicity of substances. A well-known, albeit controversial example of a standardized toxicity test is the fish test standardized in DIN 38412-L31 , which has now been replaced by the likewise standardized (DIN 38415-T 6) fish egg test . The daphnia test is also often used for this.

The "toxic capacity" describes the tolerance of an organism or an ecosystem to substances that lead to damage or death if the maximum tolerated value is exceeded.

The “toxic potential” describes the minimum amount of a substance necessary to cause toxic reactions in an organism or ecosystem.