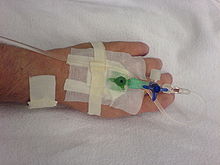 The term intravenous (abbrev. I. V. , From Latin intra "in", "inside", "inside" and vena " vein ", "blood vein"; rarely also endovenous , from ancient Greek ἔνδον "inside") means "in a vein" or "into a vein". One understands z. B. the direct administration of a drug or a liquid or suspension into a venous blood vessel. It is a form of parenteral administration of drugs, i.e. an application form . The given liquid is carried with the bloodstream to the heart and from there distributed through the arteries in the entire organism . In practice, this is done through an injection , infusion or transfusion . A needle is also placed intravenously to collect blood from a vein.

In the 17th century, intravenous injection was first described as a new method of administering drugs. The first reports of the injection of substances into veins, carried out for experimental and non-therapeutic purposes, have come down to us from the famous architect Christopher Wren (1632–1723). He injected wine and beer into a dog's veins in 1656. These experiments were continued by Robert Boyle and Robert Hooke, who also injected dogs with opium and saffron and observed the results.

The introduction of intravenous injection in humans and their later use for medical treatment is primarily due to the doctors Johann Daniel Major (1634–1693), who referred to the method in his Chirurgia Infusoria in 1664 , and Johann Sigismund Elsholtz (1623–1688), who reported in his writing Clysmatica Nova (1665 in German) about his experiments on corpses and living beings. With this work, the effectiveness of the new technology could be shown and it spread rapidly.

Intravenous therapy with saline solution (and other fluids) was first used in England in 1832 during the then rampant cholera epidemic by Thomas Latta (1796-1833 ), according to a proposal by William Brooke O'Shaughnessy , who wrote about it in The Lancet on June 2, 1832 reported. However, the therapy did not prevail at the time for various reasons, including complications due to poor hygiene.

In 1843, George Bernard managed to administer sugar solutions to animals. But it was not until the late 19th century and the beginning of the 20th century that intravenous therapy could be decisively further developed on the basis of findings in microbiology and hygiene. In 1853, Alexander Wood was the first to use a hypodermic needle for intravenous drug delivery. The method only became really popular thanks to the French doctor Charles Gabriel Pravaz (1791–1855), who developed a forerunner of the hypodermic syringe. In 1870, Pierre Cyprien Ore described the use of chloral hydrate for intravenous analgesia during surgery, establishing the technique of intravenous drug administration.

During the Second World War, the inadequacy of the glucose / amino acid solutions developed for parenteral nutrition for the treatment of the injured was recognized. This problem could only be solved by increasing either the volume or the concentration of the infusion. However, this was not possible because the veins used were only of small caliber.

In 1952 the puncture of large-caliber veins was described. This technique, developed by Aubaniac to treat war wounded, allowed the use of solutions with higher concentrations of glucose and amino acids. In 1959, Francis Daniels Moore described the use of the superior vena cava to infuse highly concentrated glucose.

The veins in the arm ( Vena mediana cubiti or Vena cephalica ) or larger veins in the neck ( Vena jugularis interna ) or in the groin are usually used as veins for intravenous treatment in humans . Superficial cranial veins have proven effective in infants.

The jugular vein ( external jugular vein ) is mostly used for larger animals (larger than sheep) . In dogs and cats , a foreleg vein ( vena cephalica ) or hind leg vein ( vena saphena lateralis ) is usually used . In pigs and rabbits , one of the ear veins ( venae auriculares ) is mostly used. In the case of very small pets , an intravenous injection is almost impossible; the jugular vein is exposed in animal experiments (under anesthesia). Another method that is used in veterinary clinics for small pets, birds, but also dogs and kittens , is intraosseous application (into a bone), but an absolutely sterile procedure is essential in order to avoid infections.

The puncture of a vein can be made easier by a few measures:

The intravenous puncture is usually carried out towards the heart. The direction of the stitch is insignificant from a practical point of view and results only from the anatomical position. Injury to the venous valves by a needle has no noticeable consequences.

The volume administered intravenously should not exceed the patient's fluid requirements. An intravenously administered drug usually takes effect within seconds and without any loss of absorption. One disadvantage is that finding a vein is not always easy. The rapid onset of the effect is also not always desirable.

The great advantage of intravenous drug administration is that the drug is immediately and fully in the bloodstream. In the case of swallowed drugs, however, the drug must be chemically designed so that it is not broken down by the hydrochloric acid in the stomach or by the liver (substances from the gastrointestinal tract first pass the liver via the portal vein ( first-pass effect ); part of the drug does not even pass through the intestinal wall). Agents administered intravenously can therefore be dosed lower in order to achieve the same effect - and therefore cause fewer side effects .

With intravenous puncture, germs can be introduced into the bloodstream, so that only sterile needles can be used. In the case of longer intravenous therapy via an indwelling venous catheter , germ colonization usually occurs within a few days, so that thrombophlebitis , bacteremia and / or sepsis can occur. To prevent this, the indwelling catheter is removed immediately if the patient complains.

If the vein is punctured, the drug can penetrate paravenously , i.e. into the surrounding tissue ( extravasation ). In the case of drugs that irritate tissue, this can lead to local tissue death ( necrosis ) or abscesses .

There is also a risk of hematoma formation , secondary perforation of the vein, venous damage and irritation, and arterial puncture and injection.