The title of this article is ambiguous. Further meanings are listed under sterilization (definition of terms ) . 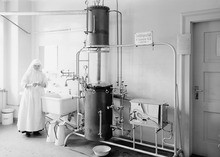 Apparatus for sterilizing surgical instruments in the administration building in Switzerland. Hospital and auxiliary institution, 1914–1918 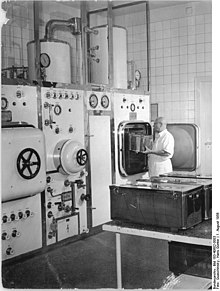 During the sterilization of materials (e.g. food , pharmaceuticals , solutions ), medical instruments, implants , objects, packaging, devices (e.g. endoscopes ) and vessels (e.g. for the culture of microorganisms) (ideally ) all included or adherent microorganisms including their survival structures (for example, spores ) and killed viruses , prions (infectious proteins), plasmids and other DNA - fragments destroyed.

The sterilization is carried out by physical (thermal, radiation) or chemical processes.

In the technical differentiation to disinfection , a higher probability of complete sterilization is generally required for sterilization by a power of ten.

The kinetics of the death of microorganisms is important for sterilization by heating . The death in a microorganism population is similar to the decay of radioactive elements in that the number of survivors in non-reproducing microorganisms decreases exponentially with time (as does the number of atoms of a radioactive element that have not yet decayed). In each unit of time, the proportion of dead individuals in a population is the same.

The time in which nine tenths of the population die, i.e. the population is reduced to one tenth, is called the decimal reduction time D (D value). This time depends heavily on the type or strain of the microorganism, the temperature and other conditions, especially the water activity , the pH value and the ionic strength . The decimal reduction time is referred to as and typically with temperature as an index . If one assumes that the rate of death is proportional to the number of germs, then the residual germ content is given by:

with initial germ count, germ count and the sterilization time .

Typically, sterilization requires that the number of living individuals be reduced by six powers of ten (i.e. to one millionth ), so the duration of the sterilization must be at least six times the decimal reduction time. For comparison, a reduction to is required for disinfection . The specific number of organisms depends on the initial number, which can be difficult or impossible to determine depending on the task. Therefore, it is better to interpret the decimal reduction time as the probability of survival. A microorganism has a 10% chance of survival when exposed to the conditions. In theory, the probability of survival is never zero.

For example, canned food can never be sterilized with complete certainty by heating. From what has been said above, it can be seen that the initial content of heat-resistant bacteria - endospores - is of great influence. The time required for heating to a certain temperature depends on the desired probability of complete sterilization and the initial content of bacterial endospores. If there are initially about 10 4 endospores per can, then after a heating period of 4 D, an average of one endospore per can will survive, a completely inadequate result. With 5 D more than 90% of the doses are sterile, with 6 D 99%. This may be sufficient for canned food, but it is often insufficient for other items to be sterilized, for example infusion solutions for medical use. With an initial content of 10 5 endospores, a heating time of 7 D is required to achieve the same level of safety.

The so-called 12D concept is often used for the heat sterilization of canned food. It is assumed that no more than about 10 6 bacterial endospores (the most heat-resistant life forms) are contained in each portion (can) before sterilization , and that there is a probability of 1 × 10 6 that the portions should be sterile (that is, less than one Million servings should only contain one serving of still living microorganisms, the microorganism content per serving should therefore be 10 −6 ). Then the endospores content has to be reduced by 12 powers of ten by heating. The heating time t T required at temperature T is therefore

The rate of death of microorganisms increases with temperature, so the D value decreases. The dependence of the D-value on the temperature is characterized by the z-value. It indicates the amount by which the temperature has to be increased in order to reduce the D value to a tenth, i.e. to increase the killing effect to ten times. The following formula applies for this:

Like the D value, the z value is also characteristic of different microorganisms.

When sterilizing by heating, a heating-up and a cooling-down phase has to be carried out, during which lethal temperatures are passed through, but these are not as effective as the higher temperature of the holding phase. However, these phases also contribute to the sterilization effect. In order to have a simple measure for the overall effect, the F-value was introduced. It is a measure of the sum of all killing effects during the entire heating process including the heating, holding and cooling phases, given as the time equivalent for a reference temperature. The killing effects in the heating and cooling phases are lower than in the holding phase due to the lower temperatures, depending on the z-value that is characteristic of the respective microorganisms. In practice, 121.1 ° C is selected as the reference temperature and 10 as the z value, and the resulting value is called F 0 . It is given in minutes. An F 0 value of 8 therefore means that the entire heating process on microorganisms with the z value 10 has the same killing effect as heating for 8 minutes at 121.1 ° C.

The C value (cooking) is also important in this context. The following applies: C (z) = t X 10 ^ ((T-RT) / z) where z is the z-value, t is the time in minutes, T is the treatment temperature, RT is the reference temperature and C is the cooking value in minutes.

Steam sterilization (heating in an autoclave ) is the standard procedure in most laboratories and hospitals ( CSSD ) and is also used for the preservation of food in cans and glass packaging. The items to be sterilized or filled are heated in steam for 20 minutes to 121 ° C at 2 bar pressure or to 134 ° C at 3 bar for 5 minutes. The prions are destroyed by heating to 134 ° C at 3 bar for 18 minutes.

The air inside the autoclave is completely replaced by water vapor. The actual duration of a sterilization process depends on the various technical designs of the autoclave, such as size, heating power, vacuum pumps and other technical factors. The autoclaves fall under the Pressure Equipment Directive and the Medical Devices Act or Medical Device Operator Ordinance and therefore require constant technical monitoring and safety checks. 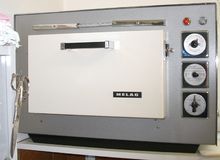 Devices that are used for this:

Fractional sterilization is also named Tyndallization after the Irish physicist John Tyndall . It can only be used for items to be sterilized in which the heat-resistant stages of the microorganisms contained therein (e.g. bacterial endospores) can germinate. The items to be sterilized are heated to around 100 ° C on several consecutive days and stored at room temperature in between. During interim storage, the spores not killed by heating should germinate and the resulting non-heat-resistant microorganism stages should be killed during heating the next day. The procedure must be repeated to ensure that all spores germinate and possibly newly formed spores also germinate again and are killed between two heating cycles. 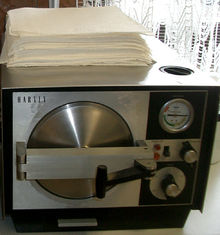 The microorganisms are killed by chemicals that are applied in liquid form to the objects to be sterilized. For example, in beverage technology, beverages are sterilized by cold disinfection or the sterilization of containers with hydrogen peroxide , dissolved ozone or peracetic acid . A critical parameter in all wet antiseptic procedures is the temperature of the sterilizing solution. As a rule, the exposure time required for sterilization can be drastically shortened by increasing the temperature. In order to remove the chemicals from the sterilized object, washing is typically then carried out with sterile water.

“Dry antiseptics” is the name given to a group of sterilization processes that is not clearly defined. The destruction takes place with gases that act on the dry objects to be sterilized. Gas sterilization takes place, for example, with formaldehyde , ethylene oxide , ozone or hydrogen peroxide .

It is often used in the cold antiseptic filling of food, especially beverages: the objects to be sterilized, mostly plastic bottles made of PET or HDPE , are first washed out with killing chemicals, such as peracetic acid products in particular, before being filled (wet antiseptics) and then another Killing of microorganisms with gases, preferably by means of hydrogen peroxide supplied in gaseous form . In contrast to wet antiseptics, the surfaces to be sterilized are dry after sterilization, which is a considerable advantage. Apparatus and operating costs are usually lower with dry antiseptics than with wet antiseptics. However, the processes are technically more difficult to master and require significantly more know-how.

See, for example, the Dry Sterilization Process, a dry antiseptic sterilization process that causes a reduction in survivors of well over 10 6 in fractions of a second even on extremely resistant endospores , but in a vacuum .

The sterilizing effect is due on the one hand to the UV radiation generated in the plasma and on the other hand to the formation of chemically aggressive substances ( free radicals ) and the bombardment of the microorganisms with ions. Despite their fundamental suitability, plasma-based sterilization processes are still not widely used in reality (e.g. contract sterilization, medical practices, food industry). Plasma sterilization has largely replaced gas sterilization in hospitals.

Corresponding commercial systems which are used for the sterilization of medical equipment and which contain plasma generators use vaporous hydrogen peroxide or peracetic acid as reagents , so that the sterilization effect can be attributed to a significant extent to microbicidal gases. In the food industry, plasma devices are currently increasingly being developed that are able to sterilize at atmospheric pressure, e.g. B. Plastic packaging films.

When sterilizing surfaces using plasma, it should be noted that the surface is activated and, if necessary, has changed properties after the process. This is particularly relevant in connection with the biocompatibility of implants . Another problem is the fact that the free radicals can also degrade polymers such as adhesives. Corresponding material compatibility tests are therefore essential.

With sterile filtration, the microorganisms are separated from the items to be sterilized by filtration. The filters used are mostly membranes with a pore diameter of 0.22 µm. However, it can make sense to use smaller pore diameters, around 0.1 µm. This is the case, for example, if, for the production of near-natural bacterial culture media, one would like to free site water such as seawater from naturally occurring bacteria in order to use it for targeted growth experiments with certain bacterial cultures. Because bacteria from natural, nutrient-poor habitats, such as soil and water, are often significantly smaller with diameters of less than 0.22 µm than those found in nutrient-rich materials with diameters of around 0.5 µm.

During filtration, only small molecules can pass through the membrane; larger particles such as bacteria are retained. However, bacteria of the genus Mycoplasma cross the membrane because they are deformable due to the lack of a cell wall. Even very thin spirochetes, i.e. thread-like bacteria, can, so to speak, pass lengthways through the pores of the filter membrane. Sterile filtration is often used to sterilize heat-sensitive solutions, for example tissue culture solutions containing serum. The main applications are the sterile filtration of aqueous solutions, heat-sensitive nutrient solutions, vitamin solutions, serums, virus vaccines, plasma fractions and protein solutions. According to the European Pharmacopoeia , after sterile filtration has taken place, the filter must be checked for sufficient integrity using the bubble point test.