The title of this article is ambiguous. For the meaning in dentistry see dental implant . 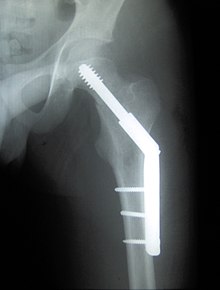 X-ray of a hip joint with an implant

An implant (from Latin in , 'into' and plantar ' to plant') is an artificial material implanted in the body that is supposed to remain there permanently or at least for a longer period of time. A distinction is often made between medical, plastic and functional implants. In contrast to the implant or the endoprosthesis , an exoprosthesis is attached to the outside of the body.

Their job is to support or replace body functions. Depending on their function, they are also known as implanted prostheses . Well-known examples are:

They serve z. B. the monitoring of animals or people by transplanting RFID chips under the skin. One manufacturer is VeriChip .

A court in Sydney first confirmed that a public transport company in the Australian city does not have to accept the unauthorized subcutaneous implantation of a ticket chip under the passenger's skin. The passenger was acquitted of the penalty in the June 2018 appeal proceedings, but has to bear the (higher) procedural costs.